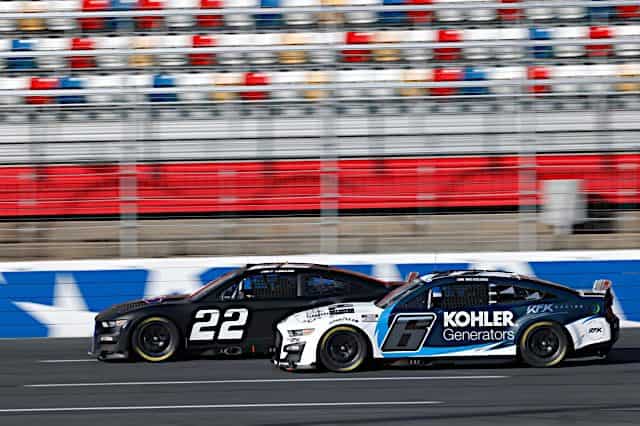 Finally, after two years of testing and a yearlong postponement of its official launch, the newest iteration of the NASCAR Cup Series has arrived.

NASCAR’s Next Gen car is here, fresh with a newly announced rules package that features a baseline 670-horsepower, 4-inch rear spoiler, more symmetrical vehicles and more spec parts than a Cup car has ever seen before.

But before we dive into welcoming the new for 2022, let’s pay homage to the Gen 6, the last Cup car each team built by hand.

From 2013 through 2021, the Ford Fusion (and eventual Mustang), Chevrolet SS (and subsequent Camaro ZL1 … and Camaro ZL1 1LE) and Toyota Camry have graced the circuit with as much as over 850 horsepower, as little as just over 400 horsepower (on the superspeedways) and with multiple aerodynamic packages.

The one consistent over their nine-season stint, though, was that they were crafted from the ground up using the same knowledge and notebooks that guided teams over the past three decades of the sport. The cars evolved, teams got smarter, engineers became more important. But the knowledge base was still centered around the same fundamentals of stock-car racing since at least the 1990s.

Corey LaJoie, driver of the No. 7 Chevrolet for Spire Motorsports, said in June that notebook is entirely useless come 2022.

“Every note that we’ve made for the past 25 years in the sport is obsolete,” LaJoie told Frontstretch at Pocono Raceway. “Now, we still know what makes a racecar go fast in a circle, but in terms of wedge, left-rear spring, trackbar height, all this stuff that we’re working with to make one of these cars go fast aren’t going to apply to the Next Gen car.”

The shift to provided pieces is massive in a sport in which teams relied upon innovation as their separating factors. At Phoenix Raceway for the Gen 6 car’s finale, Denny Hamlin’s crew chief Chris Gabehart lamented the change while understanding NASCAR’s decision to make such a sharp turn.

“This sport was built on artistry, and these cars are works of art,” Gabehart said. “There’s no such thing as perfection, and the people who build them could spend endless hours on making them a little more perfect each and every minute of each and every day. And to a large degree, that’s dying. It’s honestly unfortunate.

“I’m not saying I agree or disagree with it, but racing was built on building the fastest car you knew how to build and then driving it as perfect as you knew how to drive it. And we’re certainly losing one very significant aspect of that and I think there’s a lot of people in this industry that are sad to see it go.”

There was also some hesitation that weekend as teams were quickly realizing they have to ensure they’ll have enough pieces and parts to build their desired number of cars heading into the season.

Brad Keselowski, who jumps into the driver/owner role at RFK Racing for 2022, called the move to this car a “culture shock” for the Cup garage during his media availability at Phoenix. For all the testing that went into the car, how comfortable was the 2012 series champion with the progress of the vehicle in November?

“Comfort is a strong word,” Keselowski said. “Nobody, I think, is comfortable. We’d like to see the car be a little more settled than what it is. But the reality is we’re working through things, so hopefully we’ll get it buttoned up here in the next two or three months and then we’ll all be in a good spot.”

One month later, it seems at least some of those concerns are getting addressed. NASCAR’s decision on Dec. 21 to officially commit to higher horsepower helps establish a more definitive direction for teams to prepare their cars while still getting all their pieces sorted for the upcoming season (and preceding test sessions yet to come).

Too many questions remain to truly predict what 2022 will look like, but we were finally given some hints during the Dec. 16 and Dec. 18 tests at Charlotte Motor Speedway that helped determine the 2022 rules package.

We’ve heard for years that NASCAR was more interested in putting things in the drivers’ hands, only to be shown that the on-track product still needed to supersede the drivers’ wants (i.e. slowing them down to bunch the field together and improve optics). This time, drivers are seemingly getting their wishes.

Keselowski: “We liked everything today just some more than others. … I’m pretty excited about it because the cars are significantly more difficult to drive. … If you make a mistake, the penalty is huge. … The 4-inch felt like it was 2005 Cup cars.”

This seems like a good time to note that while we’re all nostalgic for the NASCAR of the mid-2000s, we should remember that many of those races did see the field get strung out quite a bit.

We also saw some phenomenal finishes, fantastic racing mid-pack and a significant amount of talent required to keep the car out of the fence. If that sort of racing is on the horizon — and no one truly knows yet (despite Tyler Reddick‘s numerous spins last week) — then perhaps we’re on the brink of rekindling some of that era’s magic.

The Next Gen car will be special to see in action. The dynamics of the sport truly change in 2022. Will the top teams of yesterday be the same today? Or will a relative underdog instead rise thanks to more spec parts in the mix?

The truth is we won’t have a good answer until perhaps the first dozen races are tallied. What we do know, however, is that we’re sure to witness something entirely new come February.

The wishful thinking continues ad nauseum. And the drivers will never be allowed to give their honest opinion.

I think Brad is happy with the 670hp and 4″ spoiler. I read that JJ thinks those two parts of the equation are going to make it fun for the drivers. Harvick advocated for that package also. It’s everything else that is so uncertain. At least the clowns realized their 550 was a joke.

Due to past failures, any hope I have for the next-gen is muted, but this change at least gives me some hope that it could be better.

the new car better race better than any car in NASCAR history, because the cars look like shit, might as well call it the American super car series because it’s not Cup Racing anymore

One thing is for sure, teams won’t be spending tens of thousands on shocks, & areo, etc.,etc. Which should help the smaller teams. But the big teams will still have the best drivers, & crews. So I expect some surprises, but not a sea change across the board. One thing I’ll be watching with interest will be RFK.

“Goodbye Gen 6 Hello next gen”, no, try goodbye, stock car racing, goodbye NASCAR! DoniaAjax summed it up with his statement, “The wishful thinking continues ad nauseum, and the drivers will never be allowed to give their honest opinion.” It is OBVIOUS that NASCAR is muzzling the drivers, NOTHING will be allowed to be said, that is truth about this new car. It IS NOT a stock car, it is a bastardization, an indycar chassis, with a plastic Australian V8 Supercar type body over it. It is a road-racing car, NOT a stock car! Designed to slowly usher out ovals and being in more road-courses! NASCAR’s desired end, either a road-race series with a very few token ovals tossed in or an all road-racing series! Stock car racing is DEAD and with it’s demise, the end of me being a race fan! I’m gone, there is no racing left for me to watch! NASCAR, why don’t you do the right thing and change your name to what you are, or will become, the National Association of Sport Car Automobile Racing! Quite easy, really, you won’t have to change your acronym!

Bill B
Reply to  Joshua Farmer

It may be negative but can you find any factual errors in what he said about the car or the drivers? Although, unless he knows something the rest of us don’t, I’m not sure how he “deduced” that they wanted to be a road course series. Fans did ask for fewer races at 1.5 mile ovals (because the racing sucks so bad) and we got a few more road courses (which IMO is better than nothing). What we really wanted were more short oval tracks.

Is there some benefit to NASCAR’s bottom line when they run road courses compared to ovals?
As for additional road courses being added at the expense of ovals, IMO that is really up to us in the end. If more fans tune in to watch ovals than road courses then I don’t see why they’d benefit by running more of the less watched (unless of course he has an answer to the question I asked above).