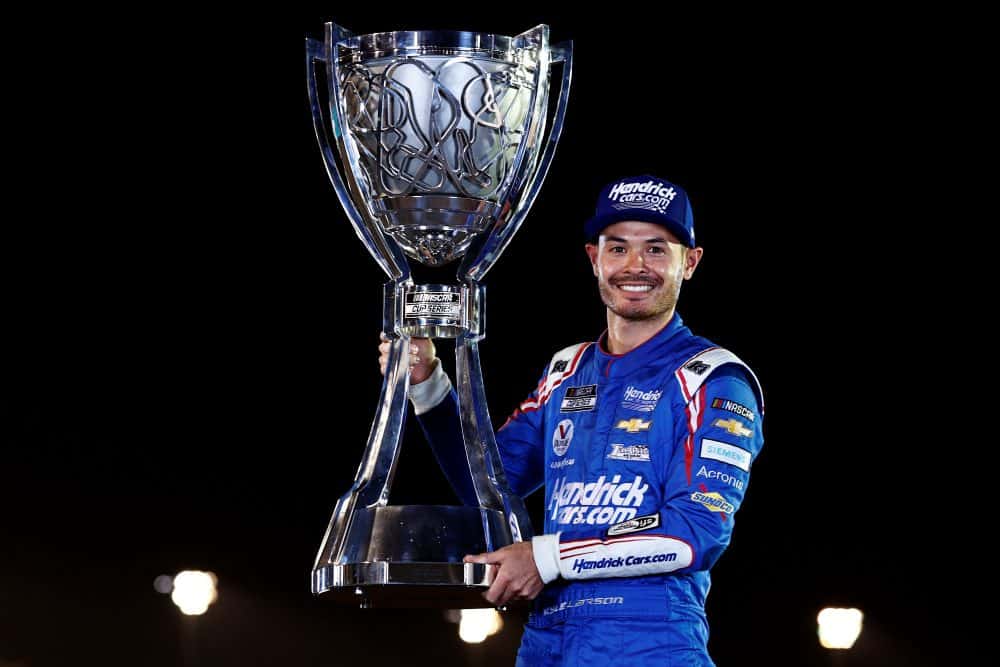 Everyone knows the ending. After the first 10-win season in over a decade, Kyle Larson stood on top of the world, the 2021 NASCAR Cup Series champion. He won on the big intermediate ovals, road courses, short tracks, 1-milers.

He made it look so easy that it’s easy to forget that it wasn’t.

Two years ago, Larson looked like he was in the catbird seat. He entered the 2020 season going into the final season of his contract with Chip Ganassi Racing, and it was no secret that Larson was going to be the hottest free agent in the sport come season’s end, with speculation that multiple top teams would bid for the California native’s services.

And then it all came crashing down.

The 2020 Cup season came to an abrupt halt as COVID-19 began to spread in the United States. Teams and sponsors had nothing to do but wait, and hope the season would resume at some point. It would, but when it did, Larson would not be a part of it.

During the weeks off, the sport came together to give fans something, and that came in the form of an iRacing series starring the Cup regulars trying their virtual skills on a variety of tracks (including the defunct North Wilkesboro Speedway).

In iRacing, drivers use spotters with whom the communicate via headset (not terribly different from the real thing), and Larson was having trouble hooking up with his spotter when he dropped a racial slur on the open channel, not aware that fans everywhere could hear. But hear they did.

NASCAR suspended Larson indefinitely.  CGR suspended him, too. iRacing banned him. Sponsor Credit One dropped him, and so did McDonald’s and Clover. Chevrolet dropped him too. He went from being the sport’s hottest commodity to an outcast overnight.

Larson issued an apology. And then he went racing in whatever vehicles he could. And often won.

But he also took time to learn, reaching out to others in an attempt to understand the impact of his words. His actions went further than NASCAR required of him, but would they be enough do drown out that one terrible word?

Larson was reinstated at season’s end, and Hendrick Motorsports, which had long coveted the talented driver, convinced Chevrolet that he was worth whatever risk he posed. Stewart-Haas Racing couldn’t convince Ford of the same thing, and the bidding war was over before it started, despite Larson’s repentance. Even Hendrick couldn’t find backing, instead putting one of owner Rick Hendrick’s businesses on the hood.

For the first time, we're hearing from @NASCAR driver Kyle Larson after he was fired in April for using a racial slur during a virtual racing event.

In his first TV interview, he spoke to @JBsportscaster about race in America and why he's hoping for a second chance. pic.twitter.com/zOXoVTU8J8

Larson’s lessons came the hard way. But then 2021 started and he made the racing look effortless.

The question around Larson had been whether he could close races consistently — he had half a dozen wins but had seen at least that many get away late in the going, too.

The first strike came at Las Vegas Motor Speedway, four races into the season. But that was followed by an up-and-down patch and then three runner-up finishes in a row, reigniting the old questions.

Then came the win at Charlotte Motor Speedway in the season’s longest race. And the victory at Sonoma Raceway and the one at Nashville Superspeedway, three in a row.

Then the playoffs started and Larson took 2021 and owned it. He won five of ten races, tying the single season playoff record. Bristol Motor Speedway, then another three in a row on Charlotte’s road course and the ovals at Texas Motor Speedway and Kansas Speedway.

By the title race at Phoenix Raceway, there was little doubt that Larson had bested the field in 2021, but the title wasn’t his yet. He contended, but a win was no sure thing. A late caution and a lightning-fast pit stop when it counted gave Larson the track position he needed, and as he had all year, he handled it from there.

Larson stood alone, on top of the world.

He’s a good champion for the sport — a winner who has been contrite and humble throughout the experience. It’s obvious he knows how close he came to letting it all slip away. Through it all, he hasn’t come across as arrogant or entitled; he learned the hard way that he’s not.

He did something wrong, paid for it, and, more importantly learned from it. He wanted it more than ever, worked harder than ever, showing the world that sometimes all it takes is someone willing to give a second chance.

He won the championship, his name got circulated in social media as a result, and no backlash from the “woke” crowd. I’m sure a few heads exploded as a result of someone who they thought should have been cancelled becoming even more successful, but not enough for anyone to notice. Good deal all around.

They say that when someone’s at the top there’s only one way to go. But I don’t see him going anywhere soon. True, he may not win the Championship every year. Under the current format, it’s a crapshoot. But look for him to be the favorite.

I’m just glad he closed the deal. He was the dominant racer all year and deserved what he got. Besides that, he’s a good kid.