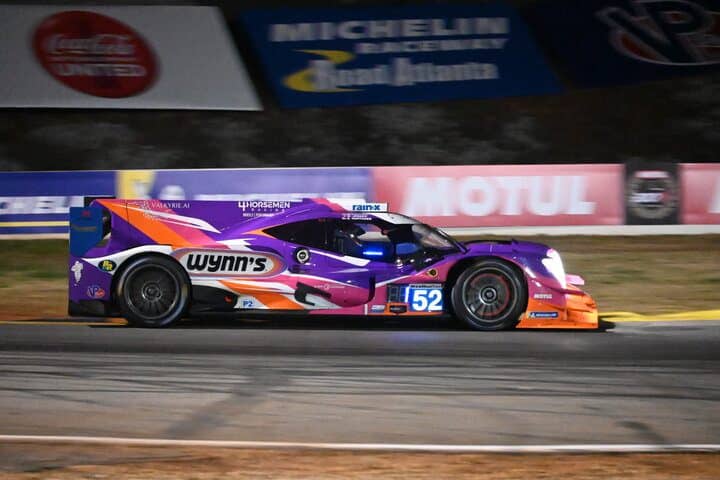 PR1 Mathaisen Motorsports announced Thursday (Dec. 23) that they will expand to two full-time ORECA 07-Gibsons in the LMP2 class for the 2022 IMSA WeatherTech SportsCar Championship.  The No. 52 will defend their LMP2 championship with an unusual split driver lineup.

For the four Michelin Endurance Cup races, the team will return with a similar lineup to 2021.  Mikkel Jensen (pictured above) will be back in the car, along with Ben Keating and Scott Huffaker.  Nicolas Lapierre‘s services have been obtained for the Rolex 24 at Daytona.  For the Sprint races, the team currently plans to run two different drivers.  Those drivers will be named later.

The second entry will use No. 11 and will effectively run as a merged program between PR1 Mathiasen Motorsports and WIN Autosport.  This car will be shared for the full season by Jonathan Bomarito and Steven Thomas.  Josh Pierson, who is a mere 15 years old, will drive in the four Michelin Endurance Cup races.  Finally, Harry Tincknell will join the team at Daytona.

“What do you do after you win a Championship?  You do it again!,” Keating said in a press release.  “I am so excited about this team going into 2022.  We had such a great ‘mojo’ as we worked through the season, and we should only be better going into 2022.  Now, we all have experience in this car on these tracks.  We should be able to hit the ground running.”

For the second year in a row, Keating will be doing double-duty in the Rolex 24 at Daytona.  Last week, Keating was announced as part of JDC-Miller MotorSports’ driver lineup in the DPi class.

Jensen and Keating teamed up for the full season in 2021 and were quite stout.  The duo claimed three victories (Sebring, Watkins Glen No. 2 and WeatherTech Raceway Laguna Seca) and never finished worse than third en route to the 2021 LMP2 championship.  Along with Huffaker, Jensen and Keating also won the LMP2 Michelin Endurance Cup title.

PR1 Mathaisen Motorsports has indicated plans to expand to two cars before in IMSA competition, but this is the first time they have announced a definitive driver lineup for that second vehicle.  In 2020, the team did intend on running a second car using No. 51.  That car did see the track in two races, but under the banner of Poland’s Inter Europol Competition.

In the No. 11, Bomarito comes to the team after running part-time for Mazda Motorsports in 2021.  He’s pleased to race full-time once again.

“This is definitely a coming home for me since I’ve raced for both PR1 and Mathiasen Motorsports in the past,” Bomarito explained.  “There are so many great people involved with this program and I am really looking forward to getting to the racetrack!  Steven [Thomas] and Josh [Pierson] have been really fast and easy to work with, which makes for a great working environment.  The three of us will be a strong lineup for the endurance races.  With Harry [Tincknell] joining us for Daytona, this will make us even stronger and I’m excited to be racing with him again.  We have all the pieces in place to compete for wins this year!”

Thomas comes to the team after running full-time for WIN Autosport, the team he co-founded, in 2021.  There, Thomas, teamed up with Tristan Nunez, finished second in LMP2 points with a victory in the Sahlen’s Six Hours at the Glen.

“I and WIN Autosport joined PR1 to win the championship,” Thomas stated.  Bobby [Oergel’s] proven record of winning in LMP2 is unmatched.  It’s been a rocket-ship ride since my first time driving a race car three years ago, and last year’s poles and podiums made me believe we could achieve even more with PR1.  Jonathan Bomarito as my co-driver for the season brings elite speed and experience, and I am excited to see Josh Pierson’s talent prevail in the endurance races.  Because I try to drive with all the former Mazda factory drivers, we have lightning quick Harry Tincknell for Daytona too.”

Pierson comes to IMSA from the Cooper Tires USF2000 Championship, part of the Road to Indy ladder.  There, Pierson finished fourth in points with five podium finishes.  His best finishes were a pair of second-place finishes on the Indianapolis Motor Speedway’s road course.  Pierson’s endurance schedule in IMSA will buttress his full-time schedule in the FIA World Endurance Championship for United Autosports.