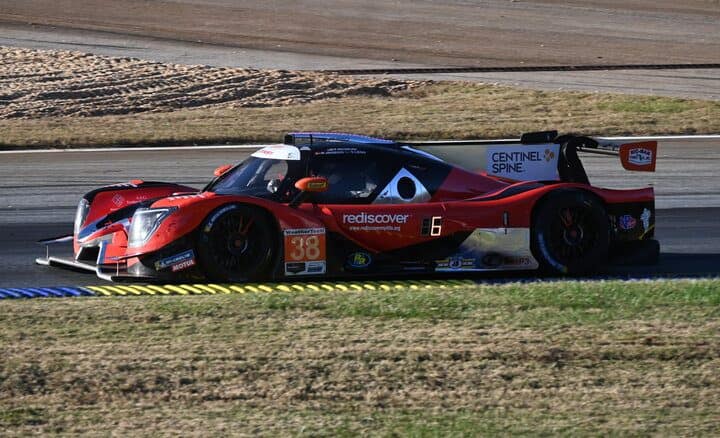 Performance Tech Motorsports revealed their driver lineup Tuesday (Dec. 28) for the Rolex 24 at Daytona.  Compared to 2021, it is a completely different lineup with only one driver having previously raced for the team in the IMSA WeatherTech SportsCar Championship.

The one returning driver to the team is Dan Goldburg, who drove full-time for the team in IMSA Prototype Challenge last season.  He also drove in five of the six LMP3 rounds in the IMSA WeatherTech SportsCar Championship, replacing Cameron Cassels after Daytona.  Goldburg’s best finishes were a pair of seconds at Mid-Ohio and Road America along with Rasmus Lindh (pictured above).  Goldburg will be joined by Garret Grist and IMSA rookies Hikaru Abe and Nico Pino.

Grist is an interesting choice.  Back at Michelin Raceway Road Atlanta in November, Grist was announced as a full-time driver in JrIII Racing’ No. 30 Ligier JS P320-Nissan in the LMP3 class.  No word as to whether that arrangement will still be on.

“I’m really looking forward to joining Performance Tech for the 2022 24 Hours of Daytona,” Grist said in a press release.  “They’re a team that has had a lot of success in IMSA over the years.  Having done Le Mans and Daytona before hopefully, I can bring some of the things I’ve learned to the team.  I think we have a great lineup to compete for a win.  I want to thank Brent [O’Neil, team owner], Dan [Goldburg], and Ligier for this opportunity.

Pino, 17, comes to Performance Tech Motorsports with a very limited racing resume.  He ran in two races for Inter Europol Competition in the European Le Mans Series’ LMP3 class.  The team was not classified at Spa, but finished seventh in class at Portimao.  Beyond that, Pino’s experience is in open-wheel racing, competing in EuroFormula Open and in Formula 4 championships.

“I raced in ELMS the last [couple of] races of the season, so I believe we will be good and ready to fight,” Pino stated.  “Physically and mentally, I know that this race will be very challenging and demanding so I am training daily and getting myself ready for it. Also, I believe with the support of Performance Tech we can succeed and be strong.”

Like Pino, Abe appears to have a fairly limited amount of racing experience.  He ran two races in the F4 Japanese Championship at Twin Ring Motegi with a best finish of 21st earlier this year.  Prior to that, his racing experience is somewhat limited in scope.  He does have an experienced manager in former IndyCar driver Roger Yasukawa and has engaged in an enhanced testing schedule in what he describes as “various formula cars” in Japan, in addition to karts.

It should be noted that the press release notes that this driver lineup will only be for the Rolex 24 at Daytona.  The team has not announced their plans for beyond Daytona.