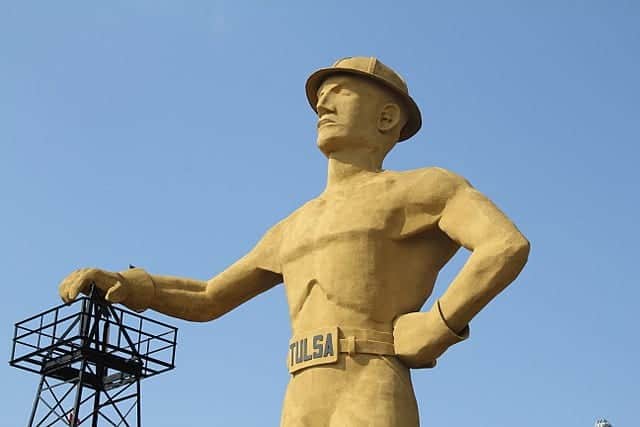 Emerson Axsom stole the show at the Tulsa Shootout while Mother Nature laid waste to much of dirt racing’s new year.

Warsaw, Ind.’s Craig Ronk capped a dominant weekend in the Winged Outlaw class by scoring a flag-to-flag win in the 55-lap finale of the Tulsa Shootout Saturday night, protecting the dominant lower line in the closing laps to keep runner-up Thomas Kunsman at bay. The win marked Ronk’s first Driller victory in what was one of the more pedestrian features of the evening.

Hometown driver Jeffrey Newell won the event of the night in the Non-Wing Outlaw class, capitalizing on a wreck-filled middle of the feature that saw a treacherous cushion claim multiple leaders in turn 3 and 4, then doing just enough to hold off a hard-charging Axsom by 0.058 seconds at the line. The win was the first Driller for the Tulsa native.

THIS is why we LOVE the Lucas Oil Tulsa Shootout.
What an INCREDIBLE finish to one of the most insane races we've ever seen‼️ pic.twitter.com/iszDwGIf98

Axsom wired the Stock Non-Wing feature to score his second career Driller, but nearly lost it twice in the final five laps. On a lap 26 restart, Axsom clipped the turn 2 berm and allowed Alex Bright to get alongside, but held him off. Bright got to Axsom’s bumper in the final corner and tapped the rear-end, but was unable to get alongside him down the frontstretch to the checkers. Axsom endured a violent tumble down the frontstretch coming to the checkers.

The Winged A-Class feature went to Fresno, Calif.’s Jake Hagopian, who ran away from a pitched battle between runner-ups Tyler Courtney and Christopher Bell after a well-timed caution with 12 laps to go bailed Hagopian out of a treacherous snarl of lapped traffic with Courtney in hot pursuit. The win was Hagopian’s second Driller, but his first on-track victory; he scored the win in 2019 after a disqualification at the front of the running order.

Axsom. Scored a driller, but more for the insane effort he put forward pounding the cushion even after the Non-Wing Outlaw wreck-fest and driving so hard he flipped himself crossing the checkers battling for that win. Being audibly emotional about tearing up his Outlaw car prior to the winged feature mere minutes removed from winning a driller was admirable as well.

He was the talk of town all night long.@EmersonAxsom became the first driver Tulsa Shootout history with four top-10 Micro finishes in a single night.

Pigeon Forge, Tenn.’s Pierce McCarter scored his second consecutive season-opening win at 411 Motor Speedway Tuesday, grabbing a $5,000 paycheck that was the largest of the New Year’s weekend. Per DirtonDirt’s recap of the event, McCarter led the final nine laps of the race after leader Cory Hedgecock was forced to retire his car.

Also at 411, based on the timestamps of the results sheet, Crossville, Tenn.’s Colton Profitt’s win in the Sportsman feature Saturday made him the first A-main winner in dirt racing for the 2022 season.

Torrance, Calif.’s Cody Laney wired a caution-plagued season opener at Mohave Valley Raceway Saturday night, driving away on a green-white-checkered restart to score the $2,022 win in the headlining IMCA modified class. Laney, who lost out on a feature win Friday night at Mohave Valley due to a last-lap mechanical malady, proved that being out front was the place to be; the 25-lap feature was slowed by eight yellows and one red flag, with only 11 of the 24 starters still running at the checkers.

It wasn’t in a late model, but Lucas Oil Late Model Dirt Series regular Spencer Hughes returned to his home track, WhyNot Motorsports Park, in Mississippi and grabbed a $1,500 win in a rain-shortened enduro race.

New York’s Shawn Mills led 124 of 125 laps to win the Hangover enduro at Penn Can Speedway Saturday afternoon, dodging at least a dozen attempts by fellow competitors to wreck his car in the closing laps of the event. The win, worth $1,500 to Mills, came in a feature that started 45 minutes late due to delays putting the 57-car starting field through technical inspection.

Though he didn’t win a feature at Tulsa, the winningest driver of Saturday was Bethlehem, Pa.’s Thomas Kunsman, who collected five checkered flags (two last-chance qualifiers and three B-mains).

As was said earlier, Emerson Axsom was the show at Tulsa. Go figure that that also included what was arguably the worst wreck of the week.

The finish of Outlaw Non-Wing.@Jeffrey47Newell wins by 0.058 seconds.

After several minutes, @EmersonAxsom climbs from the car after a scary ride. pic.twitter.com/NljtJVTx1p

Everyone that hit the turn 3 and 4 cushion during the Non-Wing Outlaw A-main at Tulsa Saturday. Both veterans Blake Hahn and Jonathan Beason lost the lead thanks to hooking the cushion. Then the cushion struck again, with Austin Lambert doing his 2021 Christopher Bell Chili Bowl impression.

Hahn had disaster strike again during the Winged Outlaw A-main, where he had his left-front wheel literally fall off the car while running third.

Not ideal for 3rd running Blake Hahn as the left front wheel decides to depart the #52. pic.twitter.com/Gijx81bVbk

Chad Thompson wasn’t racing an enduro at 411 on Saturday, but it didn’t take long for his car to look like it.

Our Friend Chad Thompson Took A Heck Of A Ride This Afternoon At 411 Motor Speedway!! He Walked Away With NO Injuries!!

Current Cup Series competitor Kyle Busch won a first Non-Wing Outlaw heat, but failed to transfer to any of the A-main features Saturday.

For you Kyle Busch fans (like @daltongood18) here’s the full interview with KB after his heat win, complete with F bomb near the end. #NASCAR pic.twitter.com/xYkKSNUIeh

Current Xfinity Series competitor Sheldon Creed missed transferring out of his LCQ in Winged A-Class by one spot on Saturday, winning a B-main in the process.

Current Truck Series competitor Hailie Deegan failed to make it past a C-main in any of her entered classes, though she did win an E-main in Non-Wing Outlaw competition.

Part-time Xfinity Series competitor Santino Ferrucci failed to make it past a C-main in any of his entered classes.

The 2021 dirt racing season is two days old, and passing points still suck. I don’t care how cool the Tulsa Shootout is, leave motorsports algebra for the engineers.

I’m often critical of how so many dirt tracks still operate like its the 1990s, with statistics only available in the form of screenshots of handwritten score sheets or pictures being posted a week after a race is run. But, having read what the Tulsa Shootout folks had to post this weekend, maybe less can be more when it comes to technology and race control.

Any points or lineups posted by anyone other than the Tulsa Shootout are unofficial. All official event information is at the Shootout Event Office. Do not take anything from Social Media into our office, you will be turned away.

It’s been known for a while that the land Trail-Way Speedway sits on has been for sale, but sadly the Christmas holiday brought unwelcome news that the land has been sold, with it unlikely that weekly racing will continue at the facility. No commentary other than this is a real bummer.

News we anticipated, but didn’t want to hear. @twspeedway is officially sold, and new owner has no plans to continue the race track. Thanks for all the great memories..

Dirt racing as an industry has been riding a high the last 18 months, capitalizing on being the only sport in the country to eschew COVID restrictions in 2020 and then on Kyle Larson becoming the first active dirt racer to win a Cup Series title in a decade. Not so fast my friend, says 2022. Seven of the 11 dirt racing programs scheduled for New Year’s weekend were either rescheduled or canceled, with races in Arizona and California called off for flooding while the annual Land of Legends Raceway enduro was postponed because the ground was too warm. Crazy times.

The Tulsa Shootout is hardly the first time this debate has popped up, and I will agree that I’ve been frustrated on several occasions by sudden cuts away from battles on-track only to see a car all by itself crossing the finish line.

I’m glad that whoever is in charge of the @FloRacing cameras is in mid season form…cars battling for position and camera on them and then we switch to the leader out front by themselves ??

Having said that, it’s racing. Winning matters, and race winners should be getting camera time for winning races. Seems like a perfect situation for split screen…

I will admit to being torn as to whether to make the trip to Penn Can Speedway for their New Year’s enduro on Saturday, and not just because there was a dodgy weather forecast. In the end, the race fan in me was happy to have made the drive, as I was able to check lifetime track number 104 on my list and saw a decent race on-track.

But part of me felt bad putting money into the track’s coffers, as one of the reasons the track was opting to host this race in the first place was to make money to pay back Short Track Super Series promoter Brett Deyo, who the track gave a bad check following his series’ race at the facility last summer. Area Auto Racing News’ Len Sammons wrote an excellent recap of this fiasco in the October 26 edition of the paper, and it truthfully had me waffling over whether to take the money I spent on race day at Penn Can and buy some STSS merchandise instead. That way, Deyo definitely would get paid.

This is a fair question, but…

Gonna throw this out there. With record breaking car counts, 400+ cars in one class and 1700 entries. Is it time for the $1000 to win $100 to start to actually get an increase? @TulsaShootout @clintonboyles98

I’m reminded of a Twitter exchange last fall where Brian Walker (aka Walkapedia) lamented the lack of big-dollar midget races on the schedule, only to be reminded that midget racers continually show up to lower-paying races (and a later note, only 23 cars showed up for the Gateway Nationals despite that finale feature paying $10,000 to win). Micros aren’t midgets, per se, but no promoter drawing 1,700 paid entries is going to voluntarily bump their purse up.

1,690 – cars entered in the weekend’s Tulsa Shootout, an event record.

$5,000 – Pierce McCarter’s winnings, making him the nation’s leading money winner one weekend into the 2022 dirt season.

Where it Rated (on a scale of one to six cans with one a stinker and a six-pack an instant classic): We’ll give the weekend four chilled bottles of decent bubbly. An overwhelming amount of Tulsa Shootout preliminaries did produce several features worth the price of admission, and my first trip to the track in 2022 was surprisingly good for an enduro. The weekend may have scored higher minus the rash of cancelations.

Up Next: No races Monday or Tuesday, but Wednesday night will mark the kickoff of the IMCA Winter Nationals at the Cocopah Speedway out in Arizona. Coverage will be available nightly on IMCA TV pay-per-view.