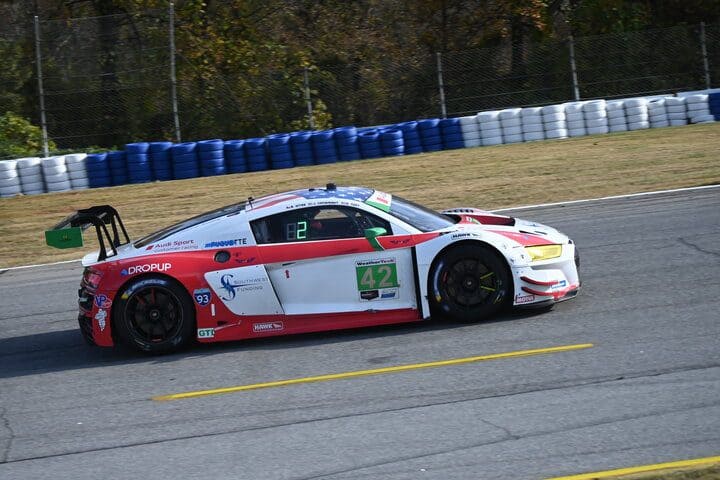 NTe Sport announced Friday (Jan. 7) that it will expand to a full-time schedule in the IMSA WeatherTech SportsCar Championship’s GTD class in 2022 after running only a couple of races in 2021.  The team will also change from an Audi R8 LMS GT3 to a Lamborghini Huracan GT3 EVO for the 2022 season.  Sponsorship in Daytona will be provided by Gas Monkey Garage

The driver lineup will be led by Markus Palttala, a veteran racer from Finland, best known in the United States for his time racing with Turner Motorsport.  He will be joined by Jaden Conwright, the winner of IMSA’s Diverse Driver Development Scholarship for 2022.  He will be joined by Don Yount and Benjamin Hites.  All four drivers raced at some point in 2021 for NTe Sport, but only Yount drove in all four of the team’s starts.

Conwright stands out due to his performances in the Audi last year.  He made his series debut at Watkins Glen after making one start with the team in Michelin Pilot Challenge at Sebring in 2020.  He qualified in the top 10 at the Glen and helped keep the team there nearly all day en route to a fourth-place finish.  His form at Watkins Glen was one of the main factors that earned him the inaugural IMSA Diverse Driver Development Scholarship.

“I’m super grateful and happy to be the first recipient of this scholarship,” Conwright said in a press release.  “I’m just looking forward to working with everyone and trying to create something that will be long-term and something that will help introduce more people into IMSA.  I can’t thank everyone from NTE Sport enough for the opportunity to race with them again in 2022. Participating in my first Rolex 24 at Daytona and the first 24-hour race of my career is something I anxiously look forward to.”

Conwright joining the team for the full season is also one of the primary reasons why the team changed manufacturers.  At the same time Conwright was announced as the winner of the scholarship, he was also revealed as a new Lamborghini GT3 Junior driver.  Being part of such a program means that you have to drive the manufacturer’s equipment when you can.  Regardless, Lamborghini is very happy to have Conwright onboard.

“I would like to congratulate Jaden for this important step in his career,” said Giorgio Sanna, Lamborghini’s head of motorsport.  “He showed strong performances in the last few years and collected valuable racing experience both in Europe and in America.  [The IMSA Diverse Driver Development Scholarship] is for sure a well-deserved achievement.  Lamborghini Squadra Corse cares a lot about the growth of young drivers as our commitment in Youngster Programmes demonstrates.  I wish Jaden a bright 2022 IMSA season at the wheel of our Huracán GT3 EVO.”

While NTe Sport did announce their lineup, there is no word on the breakdown between full and part-time drivers.  Conwright should be full-time as per the requirements of his scholarship.  The schedule for the remaining three drivers will be announced at a later date.