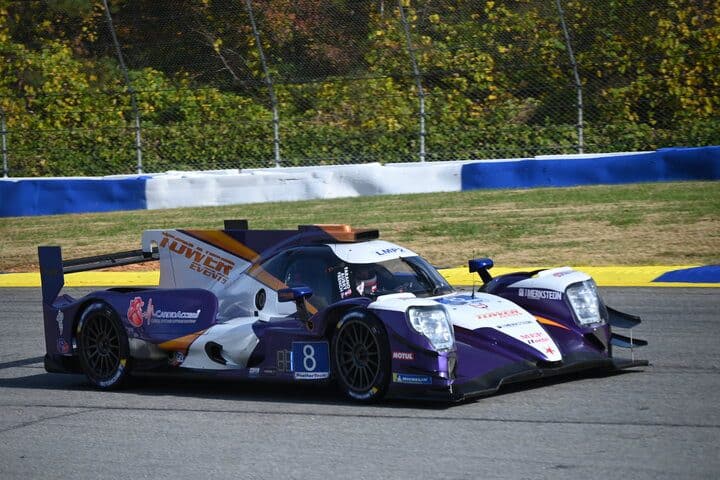 Tower Motorsport by Starworks announced the team’s return Friday (Jan. 7) to the IMSA WeatherTech SportsCar Championship’s LMP2 class for the full 2022 season.  Louis Deletraz, son of former Formula 1 and sports car racer Jean-Denis Deletraz, will join the team for the full season alongside the returning John Farano.  Rui Andrade will join in for the four Michelin Endurance Cup races, while Ferdinand Habsburg will drive in only the Rolex 24 at Daytona.

“I’m delighted to join Tower Motorsport for the full 2022 IMSA WeatherTech SportsCar Championship,” Deletraz said in a press release.  “Together with John, Rui and Ferdinand, I think we have a super competitive lineup.  The 2022 preparation has already started with some testing at Daytona, we all have the same goals and motivation of having a successful 2022 season.  The off-season preparation has already started to be ready for Rolex 24 at Daytona at the end of January where we aim to start strong!”

Deletraz comes to Tower Motorsport by Starworks after having a dominant season in the European Le Mans Series in 2021.  Deletraz, teamed with Robert Kubica and Yifei Ye, won three of six races and never finished worse than fifth en route to the championship in the LMP2 class.  Deletraz also made one start in the FIA World Endurance Championship for Inter Europol Competition at Portimao, finishing fifth in class.

Farano and Gabriel Aubry ran full-time in the LMP2 class in 2021 with endurance teammates Timothe Buret, Matthieu Vaxiviere and James French.  With French in the car, the team won the LMP2 in the Motul Petit Le Mans in November, in addition to five other podium finishes.

“I am very excited to be racing alongside Louis for the full 2022 IMSA WeatherTech SportsCar Championship and thrilled to have Rui join us for the full Michelin Endurance Cup Championship, and having Ferdinand anchoring the team for the 24,” Farano stated.  “I have already had the pleasure of testing at Daytona with these amazing drivers who immediately put their speed and talents on display. I am very much looking forward to another great season with Rick Capone (Capone Motorsports) leading our technical crew (Erwan, Richie, Martin, Damien, Daniel, Alain, JJ, Jan, and John) and our amazing engineering group led by Matthieu Leroy and supported by Viktor and Townsend whom I am sure will continue to field one of the best performing cars on the grid.”

The Angolan-born Andrade comes to the team after racing in the European Le Mans Series LMP2 Pro-Am subclass for G-Drive Racing.  He shared the No. 25 Aurus 01-Gibson full-time with John Falb, while three others (Gustavo Menezes, Pietro Fittipaldi and Roberto Merhi) shared the third seat.  The team’s best finish was third at the Red Bull Ring with Merhi joining him and Falb.  In Pro-Am, Andrade and Falb claimed two subclass wins (Red Bull Ring and Monza) and finished second in the other four races, allowing them to win the LMP2 Pro-Am championship.

Like Deletraz, Habsburg comes from Team WRT.  He was part of WRT’s dominant LMP2 squad in the FIA World Endurance Championship along with Robin Frijns and Charles Milesi.  In six races, the trio combined to win three of them, including a class victory in the 24 Hours of Le Mans.  That was more than enough to win the LMP2 championship.

Deletraz and Andrade will both be making their IMSA WeatherTech SportsCar Championship debuts.  Habsburg will be making his third start in the Rolex 24 at Daytona.  The first of those appearances came in 2018 for Jackie Chan DC Racing.  He finished fifth in class, four laps down.  Last year, Habsburg was part of the lineup in High Class Racing’s No. 20 entry.  However, he didn’t get in the car before Dennis Andersen crashed out of the race.