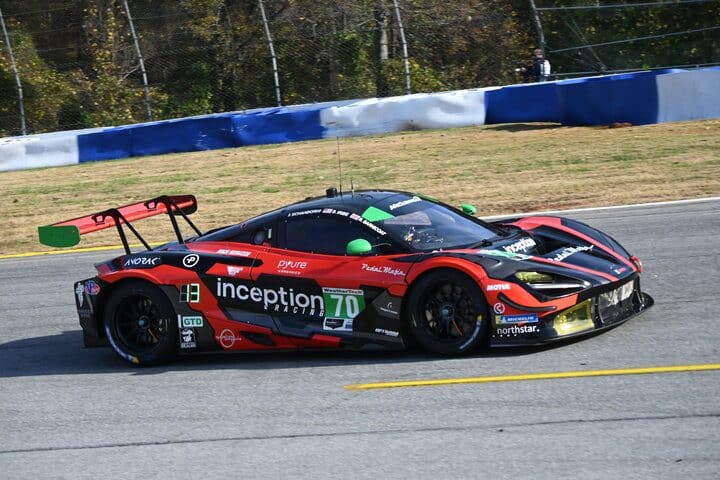 Inception Racing (via Optimum Motorsport) announced Friday (Jan. 7) that the team has committed to the full 2022 IMSA WeatherTech SportsCar Championship schedule.  Brendan Iribe and Ollie Millroy will drive the team’s McLaren 720S GT3 full-time and challenge for the championship.  Frederick Schandorff will drive in the four Michelin Endurance Cup events for the team, while Jordan Pepper will drive in the Rolex 24 at Daytona.

Team principal Shaun Goff is quite excited about the team’s new endeavor.

“There’s no better way to kick-off our 2022 campaign than heading over to the States for such an iconic event,” Goff stated.  “We made our IMSA debut only a couple of months ago, so we’re all really excited to get the ball rolling for an entire season.”

In addition, Inception Racing competed in the Intercontinental GT Challenge Indianapolis 8 Hours in October.  They were scheduled to race in the Kyalami 9 Hour in December, but the discovery of the Omicron variant of COVID-19 in South Africa resulted in the race being postponed to Feb. 5, the weekend after the Rolex 24 at Daytona.  As of this writing, the Kyalami 9 Hour is still on, but Inception Racing will not be going.

After the SRO America season ended, the team made their IMSA debut in the Motul Petit Le Mans in November.  Iribe, Millroy and Ben Barnicoat were originally entered.  However, Millroy withdrew from the race due to impending fatherhood, according to SportsCar365.com.  That resulted in Schandorff being called in to sub.

The Inception McLaren ran well during the race, but got caught up in the Big One at the beginning of the fifth hour.  Corvette Racing’s Jordan Taylor ran headlong into the back of Iribe on a restart, sparking an eight-car crash.

Of the eight cars involved in the crash, only the NTe Sport No. 42 Audi was able to continue.  Iribe was able to limp the McLaren back to the pits, but the team was unable to fix the damage and had to withdraw.

UPDATE: The original version of this article indicated that Inception Racing would be switching numbers from No. 70 to No. 7, as stated in the press release.  The team appears to have gotten ahead of themselves.  Forty7 Motorsports has committed to running an entry in the IMSA WeatherTech SportsCar Championship in 2022 in the LMP3 class.  As a result, they still have possession of the No. 7.  As a result, Inception Racing will continue to use the No. 70 that they used at Michelin Raceway Road Atlanta in November.