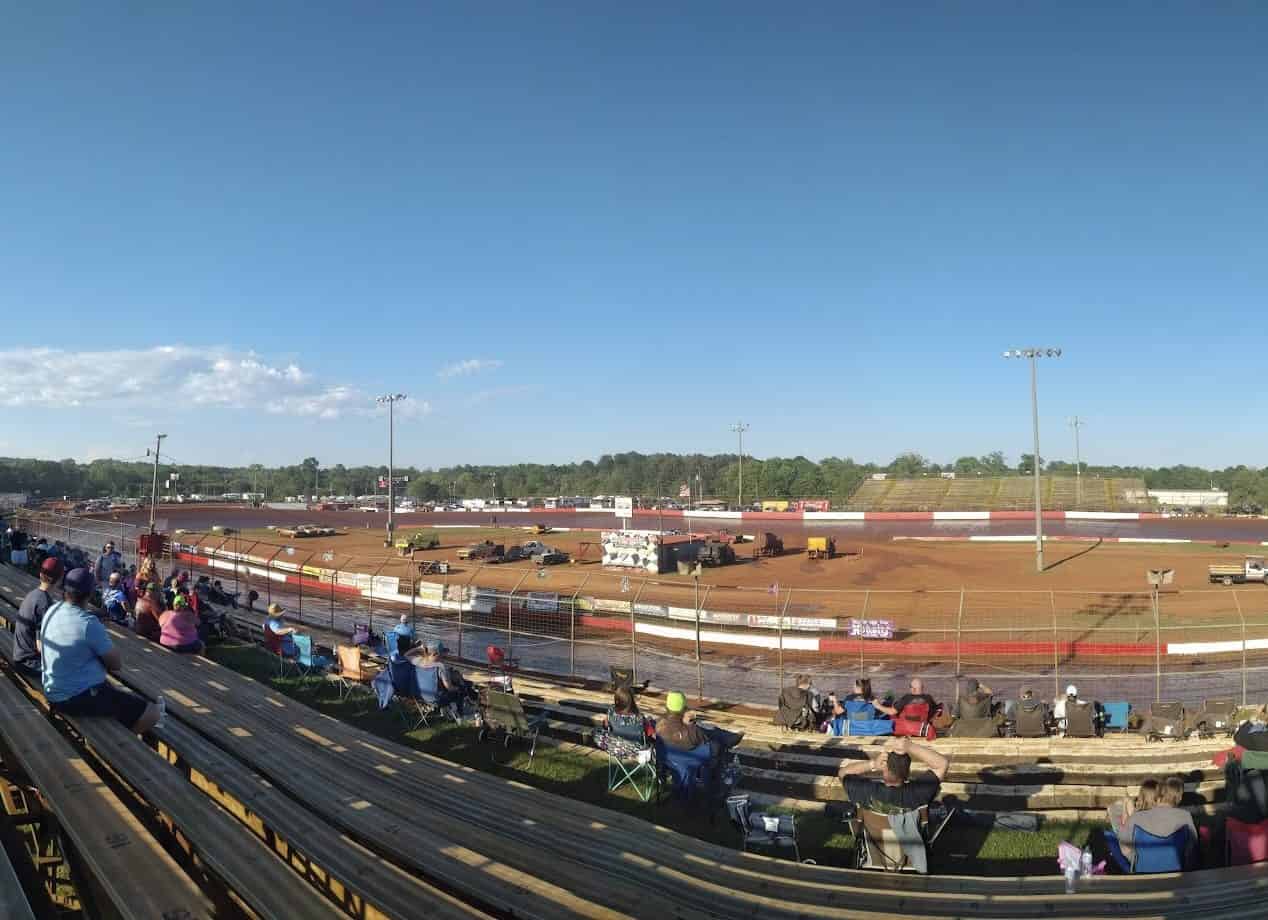 On paper, it’ll go down as Michael Page doing what he’s been doing for years, dominating the Talladega Short Track, as the Winston, Ga. driver led all 50 laps to score his sixth consecutive win in the Ice Bowl. Page was emotional in victory lane, as the win was his first since losing his father in November.

Despite first-lap scrambles, including one with Pierce McCarter (71), Michael Page (18x) led all 50 laps Saturday at Talladega Short Track to win his sixth straight Ice Bowl.

Getting to that sixth win was anything but easy. Page was involved in two multi-car crashes on the race’s opening lap, including one that saw his rear wheels on top of a competitor’s hood. Attrition, and a rulebook provision that states all drivers get their spots back on the initial start in the event of a multi-car incident, put Page on the front row for the race’s fourth attempted start after outside polesitter Pierce McCarter retired his car, and from there the No. 18X car drove away.

Winchester, Tenn.’s Christian Hanger made it interesting in the final 10 laps, catching Page and actually getting alongside him on the frontstretch with five laps to go. Lapped traffic, however, forced Hanger to go to the track’s unfavorable high side to try to pass Page for the race lead, breaking his momentum.

There’s not a lot of drivers that would feel like they need to kick off their season with a statement coming off a 2021 with 15 race wins and the World of Outlaws late model championship. Brandon Sheppard is one such driver, and he’s done just that, sweeping the first two features of the relocated Wild West Shootout, now in Vado, N.M. following the closure of Arizona Speedway.

While Sheppard took control early over a caution-free race Saturday and never looked back, he had to earn the win Thursday in what will likely go down as a race of the year candidate for 2022. Sheppard was part of a four-way slide job extravaganza that saw Garrett Alberson, Mike Marlar and Tyler Erb join Sheppard taking time at the point, racing over every square inch of an impeccable racing surface.

Sheppard took the lead for good with two laps to, pouncing when Alberson got out of shape exiting turn 4 the lap before and sliding to the lead through turns 1 and 2. Erb threw a slider of his own on the white-flag lap and briefly took the lead, but Sheppard was able to cross back over to score the win.

By sweeping the first two events, Sheppard remains eligible for a $300,000 bonus should he sweep all six features of the Wild West Shootout.

Watching Michael Page drive away from the field in a six-year-old racecar that had been wrecked twice to dominant yet another Ice Bowl, there’s no conclusion to be drawn other than that Page clearly has an in with the Indian spirits at the superspeedway across the street. The man is untouchable at the Hornet’s Nest.

They shouldn’t even run the Ice Bowl anymore. Just send some pics out of a rubbered up track and Michael Page in the winners circle. Nobody will have any idea.

Christian Hanger’s move to the outside of lapped traffic with five laps to go ultimately backfired and Hanger was never able to challenge Page again for the Ice Bowl win. Why is this a success? Because Hanger gambled to win instead of following the dominant car. Hanger’s efforts were the only reason Saturday’s feature was worth watching after Page dominated much of the race.

Defending USMTS champion Dereck Ramirez picked up right where he left off, winning the Saturday A-modified feature at Vado and finishing second on Sunday. It’s too bad Jake O’Neil isn’t here contesting the tour, as the two put on a pitched points battle through the conclusion of the USTMS season in 2021.

Bakersfield, Calif.’s Ethan Dotson is on fire at Cocopah, taking the checkered flag in dominating fashion on Saturday night to score his third straight IMCA modified win on the Winter Nationals circuit. In bad news for the competition, Dotson said in victory lane that his crew hadn’t had to make any changes to their car over the course of their win streak.

Calhoun, Ga.’s Oreo Thomas topped a stout field of 38 limited late models in Ice Bowl qualifying Friday afternoon, only to, as the track PA called it, “Cheech and Chong” his engine on the first lap of the first heat race contested at Talladega. The No. 99 team did not return for B-mains Saturday.

Yuma, Ariz.’s Ryan Brooks incurred the ire of the track PA at Cocopah, and for good reason, when she turned the wrong way under green during Friday’s sport compact competition trying to get to pit entry.

Wimberley proceeded under the ensuing yellow to walk halfway down the backstretch to express displeasure with another driver, but watching the video I’m not sure there’s anything to be said other than forcing the issue.

I was half tempted to list the entirety of the CRUSA street stock field at Talladega for the demolition derby that their B-mains and feature event disintegrated into Saturday, but a special note goes to Merrillville, Ind.’s Michael Clark, who got had plenty of fans shouting approval after getting tagged under yellow after the B-main was over, as Clark drove like a bull in a china shop throughout the event. He missed a transfer spot after being sent to the rear for rough driving.

Truck Series regular Matt Crafton missed Saturday’s A-modified feature at Vado by one spot. On Sunday, a bad mid-race restart dropped Crafton from fourth to eighth in his B-main, a hole he couldn’t dig out, leaving Crafton out of the feature for the second night running.

Soon-to-be NASCAR Hall of Famer Red Farmer was unable to return behind the wheel of his 604 crate late model at Talladega this weekend as scheduled, but the good news is the heart procedure he underwent leading up to the race was a success. Farmer is expected to resume competition at TST this spring.

.@NASCAR legend Red Farmer keeps on ticking after he had a heart stent inserted & a valve replaced.

Says the 89-year-old:
“It’s like racing- I just needed a new valve to get back up to speed!”

Former Cup Series competitor Ken Schrader missed Friday’s IMCA modified feature at Cocopah on Friday, but qualified for the A-main on Saturday; Schrader started 21st and made it as high as sixth before fading to 11th in the final running order.

Former Cup Series competitor Mike Wallace was involved in a vicious crash in his stock car heat at Cocopah Friday that destroyed the No. 6 machine.

Wow. Rough start to the night for @MikeWallaceRace at Cocopah pic.twitter.com/WwFeE22o8j

On Saturday, the elder Wallace went from the front row of his heat to the back by turn 2 of the first lap. Wallace finished eighth in his B-main Saturday and has yet to make an A-main at the IMCA Winter Nationals.

I will always miss the ever-unpredictable Arizona Speedway, but after watching Sunday’s late model feature at Vado, there’s no debate that the Wild West Shootout promoters picked the right track to call their new home. Racing doesn’t get better than that feature.

Watching the end of that race… pic.twitter.com/oALLGMV6K0

Single-car or small-group qualifying is one of this facets of a racing program that I absolutely love. It’s a great teaser… for the headline class. But Talladega Short Track opting to qualify all 351 cars on the property Friday for Ice Bowl prelims, only to run heat races for all of the classes anyhow, is absolute overkill, especially for a Friday qualifying day. Of course, 351 cars showed up for a Friday qualifying day, so what do I know?

4-cylinder classes often don’t get a lot of respect, shuffled in race lineups and delayed until the end of bloated race programs on a regular basis. But I will admit, even I was having a hard time taking that class seriously at Talladega this weekend, with a field of cars including a minivan and Jimmy McAvoy’s car racing with a giant stuffed gorilla sticking out the rear window. Jocko Flocko rides again.

Forney, Texas’s Clayton Holland “won” the last-chance dash race at Vado on Sunday night… because every other eligible driver either opted out or left the track not understanding the rule that those wanting to participate were forbidden from going to the pits. I was critical of this format a year ago for different reasons, but after watching this cluster unfold it’s time to stop stuffing sprint car pegs in late model holes.

If there wasn’t a shortage of sheetmetal in Alabama before this weekend, there likely is one now. I reached my limit of watching the Ice Bowl and shut down the Flo Racing stream after only three of the eight feature events were done Saturday because the caution flag had flown 76 times by then. Yellow fever was more prevalent than Omicron along I-20 this weekend, and it really sucked any enjoyment out of sitting through the event, even if the closing laps of the super late feature were nerve-wracking.

I didn’t know @FloRacing had demo derbies on! #icebowl #cautionfest

Let’s get two things straight here. I am not saying Michael Page benefitted from any favoritism or that the rules were followed incorrectly in officiating Saturday’s Ice Bowl late model A-main. But the rulebook provision that allows for drivers to keep their starting positions in the event they’re involved in a multi-car incident on the opening lap was exposed as fatally flawed on Saturday.

Case in point, Page was involved in two wrecks on the opening lap, and a result, when the race finally got started on its fourth attempt, Page in fact started on the front row courtesy of landing his car on top of the outside polesitter during one of the yellow flags. Page’s win was completely within the rules, but I can understand fans’ frustrations that a driver that essentially crashed twice kept getting mulligans because said incidents collected other cars.

Friendly reminder, there are alternatives to NASCAR, who from Mike Harmon to Brandon Brown have been on a “crush the little guy” kick this offseason (stop huffing and puffing about never watching again and CUT THEM OFF). Case in point, even though the superspeedway was closed this weekend, Talladega Blvd. was alive and well at the dirt track. Just listen to the gems that came from the track PA… “please don’t throw drinks off the top of the grandstands. Please don’t park on the side of the road. Please control your children if they’re driving ATVs in the pits….”

Lastly, to close the loop on Thursday’s column, the IMCA TV crew announced during Saturday’s telecast that the Cocopah Speedway tow truck driver that suffered a medical emergency earlier this week at the track remains hospitalized but is showing signs of improvement.

48 – number of yellow flags that flew during B-main competition at Talladega Saturday.

Where it Rated (on a scale of one to six cans with one a stinker and a six-pack an instant classic): We’ll give the weekend five Oversoul Brewing Mosaic Pale Ales. The track crews at Cocopah and Vado have delivered stellar racing surfaces, and the feature races have delivered as a result, with Sunday’s late model feature at Vado as good as dirt racing gets. Had the Ice Bowl had any redeeming qualities on track this weekend would have scored a six-pack.

the ice bowl was painful to watch on flo. (and i love flo)
the fields could hardly run a couple of laps without a caution.
without exception.
that’s my report which is is fact until i turned it off halfway in the main feature.
page may have won his 6th…
i didn’t see it.
too painful.