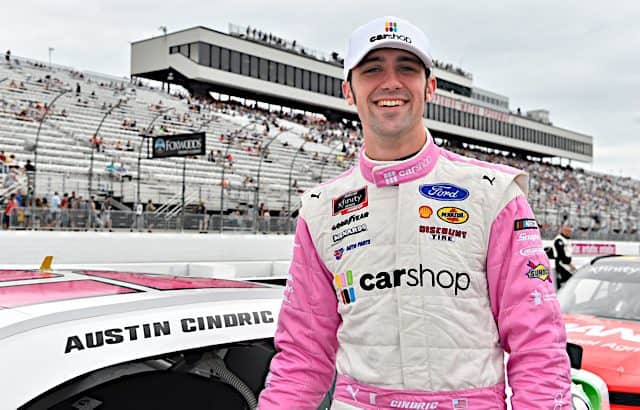 WeatherTech Racing announced Monday (Jan. 10) that the team will enter a third car in this month’s Rolex 24 at Daytona.  This entry, a second Mercedes-AMG GT3 Evo, will be shared by Team Penske NASCAR Cup Series regular Austin Cindric, along with Dirk Mueller and Patrick Assenheimer and race in the GTD Pro class.  The team will run the No. 15.

The team will be racing in addition to WeatherTech Racing’s other two programs.  These cars are another Mercedes and a Porsche in the GTD Pro class.

According to WeatherTech CEO David MacNeil, the third car came together due to simple circumstance.

“The second Mercedes entry came about with Proton [Competition] being contracted to prepare the car,” MacNeil stated in a press release.  “It was also an opportunity for Mercedes of Billings to have a presence in the race as well.  The Rolex 24 is a showcase for sportscar racing around the world and is really the only on-track competition going on this time of year. We are excited to have a third WeatherTech liveried car on the grid for the 60th running of this great race.”

As MacNeil noted, Mercedes-Benz of Billings will serve as a sponsor for the team in addition to WeatherTech.  MacNeil is a co-owner of the Montana luxury car dealership.

Cindric appears quite excited for his one-off ride, but realizes that it won’t be easy.

“Happy to be back.  GTD Pro is gonna be stacked,” Cindric tweeted.

For Cindric, this will be his fourth try in the Rolex 24 at Daytona and the first since 2019.  Two of his previous starts and (five of his six previous IMSA WeatherTech SportsCar Championship starts) were in Lexus RCF GT3s for both 3GT Racing and Vasser Sullivan.  His best Daytona finish is a fifth in 2019 that came with Vasser Sullivan.  That race was alongside Nick Cassidy, Jack Hawksworth and Richard Heistand.  Cindric also raced in the 2018 Rolex 24 in an ORECA 07-Gibson for JDC-Miller MotorSports alongside Robert Alon, current INDYCAR driver Devlin DeFrancesco and Simon Trummer.  He would finish sixth overall.

For Mueller, the news marks his return to the IMSA WeatherTech SportsCar Championship.  He has not competed in IMSA since the end of the factory Ford GT program with Chip Ganassi Racing under the banner of Ford Chip Ganassi Racing.  In 33 starts, Mueller had five class victories, including the 2017 Rolex 24 at Daytona alongside Sebastien Bourdais and Joey Hand.  Overall, Mueller has two class victories in the Rolex 24, the other coming in 1998 for Rohr Racing in a Porsche 911 GT1 Evo in the GT1 class (second overall).  That race was run as part of the short-lived revival of the United States Road Racing Championship (USRRC).

Assenheimer will be making his IMSA WeatherTech SportsCar Championship debut with WeatherTech Racing.  Assenheimer’s primary ride in 2021 was with Haupt Racing Team in Fanatec GT World Challenge Europe Powered by AWS Endurance Cup.  Assenheimer shared a Mercedes with team owner Hubert Haupt and a variety of third drivers.  The season was a struggle for the relatively new team as their best finish was a 14th overall at the Nurburgring.  Assenheimer and Haupt failed to score any points in the overall championship (they’re only awarded for the top 10 finishers in each race).  They ended up 25th in Silver Cup points with their best finish in class being fifth at the Nurburgring.

WeatherTech Racing’s No. 15 is the 10th confirmed entry in the GTD Pro class for the Rolex 24 at Daytona.  There are a couple of more teams that have yet to announce their lineups that should be added to that total.  RACER’s Marshall Pruett reported in December that a capacity field of 60 had been reached for the race with 13 of those entries being GTD Pro cars.  Two days later, IMSA increased the maximum field size for both the ROAR Before the 24 and the Rolex 24 at Daytona to 61 cars.