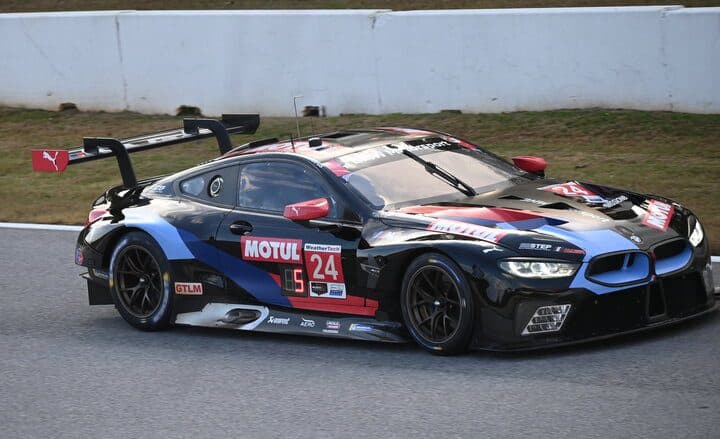 BMW Motorsport Tuesday (Jan. 12) revealed the two-car driver lineup for BMW M Team RLL’s assault on the Rolex 24 at Daytona Tuesday (Jan. 12).  The lineup will be mostly BMW factory drivers with a mix of new and returning drivers to the fold in the GTD Pro class.

The No. 24 BMW M4 GT3 will be shared by Philipp Eng, Sheldon van der Linde, Marco Wittmann and Nick Yelloly.  Meanwhile, the No. 25, which will carry sponsorship from Motul, will have Connor de Phillippi, John Edwards, Augusto Farfus and Jesse Krohn driving.

As far IMSA experience goes, the No. 25 is by far the more experienced team.  Krohn has 46 career starts and a past class win in the Rolex 24 (2020).  That victory came alongside Edwards and Farfus.  Edwards has part of BMW’s factory squad since 2014, racing the Z4 GTE, the M6 GTLM and the M8 GTE.  He has three victories in that time.  Farfus has 16 career IMSA WeatherTech SportsCar Championship starts for BMW.  He has two Rolex 24 at Daytona class victories (2019 and 2020).  The 2019 win came with de Phillippi, Eng and Colton Herta.  De Phillippi has five career IMSA class victories, four of which came with BMW.  The other was in the GT Daytona class with Montaplast by Land-Motorsport in 2017.

In the No. 24, Eng is the only driver with a previous IMSA victory in the class.  He typically runs a couple of endurance races a year for the team, but ran all four endurance races in 2021.  Outside of IMSA, Eng had a pretty quiet 2021, only competing in a couple of Nurburgring Langstrecken Serie (NLS, formerly VLN) races.

Wittmann is best known for racing in DTM over the past nine seasons.  He is a two-time champion (2014 and 2016) and is coming off of a fourth-place finish in DTM points in 2021, the first in which the series used GT3 equipment.  In IMSA, Wittman has only two career starts.  One was with Turner Motorsport in their No. 96 BMW M6 GT3 in the 2016 Rolex 24 at Daytona.  That race ultimately ended with the team being moved to the rear of the GT Daytona class due to drive-time issues.  The other was last year in the No. 25 BMW M8 GTE in the GT Le Mans class, where Wittmann finished third in class.

Van der Linde has five career IMSA starts, all in the GT Daytona class for Montaplast by Land-Motorsport.  There, van der Linde won his class on debut at Road Atlanta in 2017 along with de Phillippi.  The Montaplast team was dominant at Daytona in 2018, but a series of penalties tied to fuel flow killed their chances at victory.

Finally, Yelloly has only one previous start in the series.  That came in the 2020 Mobil 1 12 Hours of Sebring as an emergency substitute after Bill Auberlen discovered that he was a close contact to someone that had tested positive for COVID-19.  Yelloly drove well in the race, but brake issues put the team out late.  Yelloly primarily races in Europe in SRO competition and was part of the winning team in the 2020 24 Hours Nurburgring.

There is no word as to whether BMW M Team RLL will run their cars full-time or (if do) who will driving those cars on a regular basis.  As announced in November, the team will be spending 2022 developing the new BMW M LMDh prototype ahead of a debut in 2023.  They have no desire to take away from that development to race in GTD Pro.