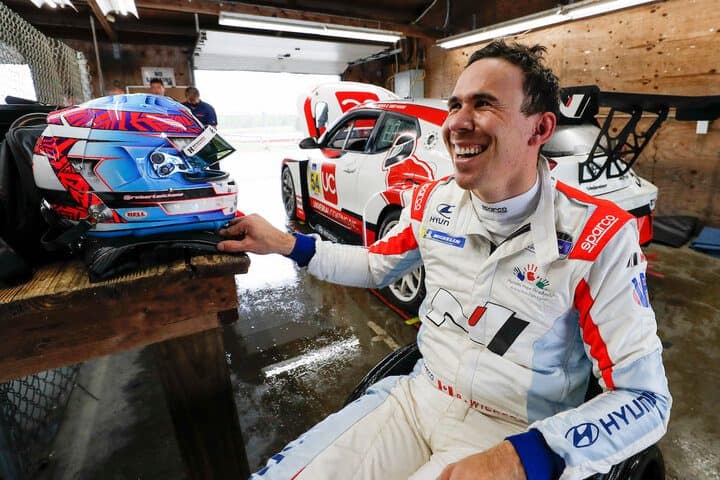 Bryan Herta Autosport announced Friday (Jan. 14) that Robert Wickens will return to full-time competition in 2022.  He will drive the No. 33 Hyundai Elantra N TCR full-time in IMSA Michelin Pilot Challenge alongside Mark Wilkins, thus completing the 12-driver lineup that BHA announced on Jan. 6.

“I’ve spent a lot of nights thinking and dreaming of this moment, and with the support from Bryan Herta and Hyundai it is all becoming a reality,” Wickens said in a press release.  “I am hungrier now than I was before my accident to compete for wins again!  I’m really looking forward to incorporating myself with the entire Bryan Herta Autosport team and finally get my first taste of the Hyundai Elantra N TCR.”

For team owner Bryan Herta, it is a momentous occasion for someone of Wickens’ caliber to make his return to racing with his team.

“Today is a monumental day for us as a team and as fans of Robert Wickens,” Herta stated in a press release.  “We have followed along with Robert’s rehabilitation and marveled at his determination and dedication, along with his many, many fans. To now announce that he will be making his professional motorsports return in one of our Hyundai Elantra N TCR cars is truly incredible. We thank Hyundai for their amazing support and helping us build a path for Robert to get back to where he belongs.”

When the BMW Endurance Challenge rolls off on Jan. 28, it will mark Wickens’ first competitive race since his catastrophic crash in the 2018 ABC Supply 500 at Pocono Raceway.  Wickens’ car was launched into the catchfence in the Tunnel Turn, resulting in a series of injuries.  The most notable of the injuries were a spinal cord injury and a throacic spinal fracture, which required surgical intervention.

Two months after the crash, Wickens acknowledged that he is now paralyzed as a result of the crash.  Since then, Wickens has been in rehabilitation on a daily basis, attempting to regain as much use of his extremities as possible.  Racing-wise, Wickens has driven in sim races since the crash.  He was part of INDYCAR’s iRacing Series

BHA is likely the best place for Wickens to end up in IMSA.  The team already has experience with hand control systems.  Michael Johnson, who drives the No. 54 Hyundai, is also paralyzed from the waist down as a result of a motorcycle crash and races with the use of a hand control system.  Wickens tested Johnson’s Hyundai Veloster N TCR last May at Mid-Ohio Sports Car Course.  The hand control is not the only way in which the car can be driven.  Stephen Simpson, Johnson’s co-driver/driver coach, drives the car in a traditional style.

“The car’s still in one piece, but it felt good,” Wickens told IMSA’s David Phillips at the time.  ” There’s a lot going on: First time with hand controls, first time with this car and on a damp track.  It gave me a much greater appreciation for what Michael Johnson has been able to achieve.  I tried not to be a hero, hard as that was!  But it felt good to be back in a race car.”

According to the team’s press release, Wilkins will have access to a switch that will deactivate the hand throttle.  As a result, it will become a regular Hyundai Elantra N TCR that can be driven using the pedals and the paddle shifters.

Wickens’ background is primarily in open-wheel racing, but prior to his time in the NTT IndyCar Series, Wickens competed full-time in DTM from 2012-2017 in Mercedes equipment.  In 84 starts, Wickens scored six career victories and 15 podium finishes.  His best finish in points was fourth in 2016.

Wickens’ first chance to drive the Hyundai Elantra N TCR will be next Friday at Daytona International Speedway as part of the ROAR Before the 24.  The season opener for IMSA Michelin Pilot Challenge, the BMW Endurance Challenge at Daytona on Jan. 28, can be streamed live on Peacock starting at 1:30 p.m. ET.  Frontstretch will be in Daytona to bring you coverage on-site.

This is awesome news! It will be great to see Wickens back on a racetrack in a competitive environment.