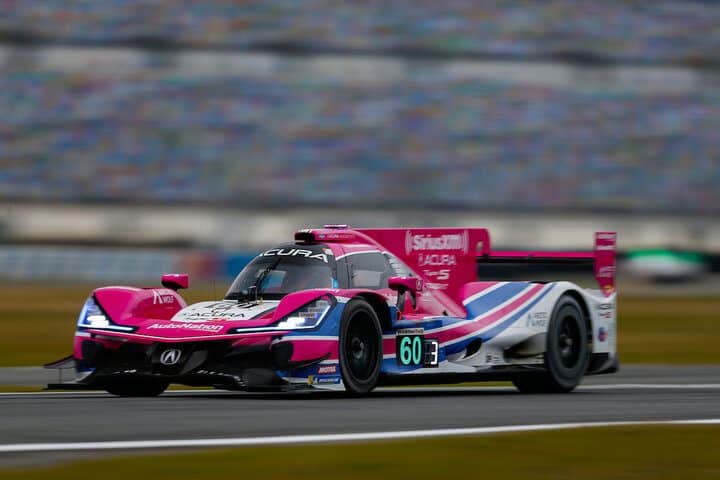 Meyer Shank Racing with Curb-Agajanian’s Tom Blomqvist may be new to the DPi class in 2022, but he does not lack any speed.  Blomqvist was fastest overall in Day No. 1 of the ROAR Before the 24 Friday with a lap at 135.833 mph in his Acura ARX-05.

In the morning session, the 61 teams present in Daytona got themselves up to speed pretty quickly.  There were no significant incidents, but there were two red flags during the session.  One was due to Ugo de Wilde stalling the No. 26 Muehlner Motorsports America Duqueine M30-D08 at the exit of the infield.  Later on, a wheel got loose in the pit lane and came to rest in the middle of the road, causing a second red flag.

The early session was topped by Wayne Taylor Racing’s Ricky Taylor with a lap at 134.468 mph in his Acura.  Taylor’s lap was nearly three-tenths of a second faster than Oliver Jarvis in the Meyer Shank No. 60.  Chip Ganassi Racing’s Sebastien Bourdais was third in the best of the Cadillacs, followed by teammate Kevin Magnussen.  Kamui Kobayashi was fifth quickest.

In the GT ranks, there are no official technical differences between cars that run in the GTD class (previously GT Daytona) and the new GTD Pro class.  Both classes run to the same rules and on the same tires.  As a result, it is easily possible for a GTD team to beat a GTD Pro team on merit.

That is what happened in the opening session as Wright Motorsports’ Jan Heylen was the fastest in the GTD class and the fastest GT driver with a lap at 120.357 mph, 27th overall.  Heylen’s lap was four-tenths of a second faster than the Lamborghini of TR3 Racing’s John Megrue.  GMG Racing’s Klaus Bachler was third fastest in his Porsche, followed by SunEnergy1 Racing’s Raffaele Marciello in the best Mercedes.  TeamTGM’s Owen Trinkler, driving a Porsche that is a de facto teammate to Heylen, was fifth.

GTD Pro was led by TR3 Racing’s Pro entry with Lamborghini factory driver Marco Mapelli at the wheel.  Mapelli’s lap at 119.967 mph (28th overall) was one-ninth of a second faster than the Porsche of Pfaff Motorsports’ Matt Campbell.  BMW M Team RLL’s Philipp Eng was third in the new BMW M4 GT3 No. 24 with WeatherTech Racing’s No. 97 Mercedes of Maro Engel fourth.  Vasser Sullivan’s No. 14 Lexus for Jack Hawksworth was fifth.

The late afternoon second session was held under gray skies in Daytona.  The speeds during the 105-minute session increased by a decent amount over the morning session.  Blomqvist’s quick lap of the day came in the final five minutes of the session, designed as the Pro-only portion of the session.

In LMP2, G-Drive Racing by APR’s Rene Rast was fastest with a lap at 133.493 mph, good enough for eighth overall and nearly two seconds faster than any LMP2 team ran during the ROAR last year.  Rast’s lap was three-eighths of a second faster than High Class Racing’s Fabio Scherer.  Mikkel Jensen was third in PR1 Mathiasen Motorsports’ No. 52 ORECA.  Tower Motorsport’s Louis Deletraz was fourth, while Racing Team Nederland’s Rinus VeeKay was fifth.

Sean Creech Motorsports’ Malthe Jakobsen was fastest in LMP3 with a lap at 124.420 mph, good for 18th overall.  Jakobsen’s lap was a quarter of a second faster than Braun.  Riley Motorsports’ Felipe Fraga was third fastest, followed by Andretti Autosport’s Gabby Chaves.  De Wilde was fifth.

TR3 Racing’s Mirko Bortolotti was fastest in GTD Pro with a lap at 120.320 mph, good for 27th overall.  Bortolotti’s lap was a quarter of a second faster than Pfaff Motorsports’ Mathieu Jaminet.  KCMG’s Laurens Vanthoor was third fastest in his Porsche.  WeatherTech Racing teammates Jules Gounon and Dirk Mueller were fourth and fifth in their Mercedes-AMG GT3s.

Marciello was fastest in GTD and second of all the GT entries with a lap at 120.212 mph.  Marciello’s lap was nearly a quarter of a second faster than HTP Winward Motorsport’s Mikael Grenier, while Alegra Motorsports’ Maximilian Goetz was third.  The McLaren 720S GT3 of Crucial Motorsport’s Jon Miller was fourth, while Magnus Racing’s new Aston Martin with Spencer Pumpelly driving was fifth.

Like the first session, there were two red flags during the session.  The first came just three minutes in before anyone set a time.  Later on, Antoine Doquin stalled the Forty7 Motorsports Duqueine M30-D08 on the apron of turn 2 of the tri-oval.  That resulted in a red flag so that the car could be retrieved.  There were also a couple of off-course excursions.  Austin Cindric went off at the International Horseshoe with his No. 15 WeatherTech Racing Mercedes early.  Later, United Autosports’ Jim McGuire went off at West Bend.  Neither incident stopped the proceedings.

Saturday is a busy day for WeatherTech teams.  Session No. 3 is scheduled for 10 a.m. Saturday morning and will last an hour.  Qualifying for the Rolex 24 Qualifying race will be at 3:25 p.m., immediately after the Prototype Challenge race.  The day will be capped off with a two-hour night session.