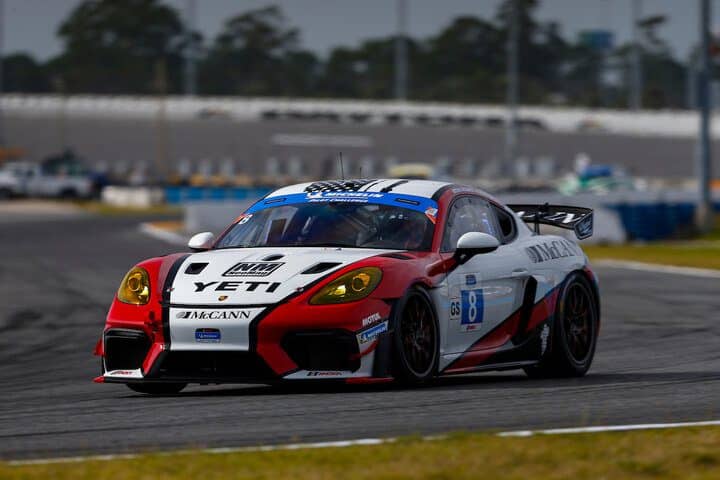 Day No. 2 of the ROAR Before the 24 for IMSA Michelin Pilot Challenge teams saw the times continue to tumble.  McCann Racing’s Andrew Davis ended up fastest overall for the day with a lap at 113.698 mph, the quickest lap of the test so far.

The first on-track session started at 8:45 a.m. Saturday morning.  This was before the rains came in, but early enough that it was still quite cool outside.  As a result, the best laps of the session were turned in early.

Only one driver topped the charts for the entire session.  That was Black Swan Racing’s Jeroen Bleekemolen in his new Porsche Cayman GT4 RS CS.  He set the early pace on his first lap, then continued to improve.  On his fifth timed lap, Jeroen set a lap at 113.222 mph, the fastest lap of the weekend to that point.  It held up to be the fastest lap of the session.

Bleekemolen ended up six-hundredths of a second faster than the Mercedes of Murillo Racing’s Christian Szymczak.  NOLAsport’s Matt Travis was third in his Porsche, then Davis and CarBahn Motorsports with Peregrine Racing’s Tyler McQuarrie.

JDC-Miller MotorSports’ Chris Miller was quickest in TCR with a lap at 107.177 mph, 30th overall.  Miller’s lap was six-hundredths of a second faster than Road Shagger Racing’s Jon Morley in a similar Audi RS3 LMS Sequential.  Bryan Herta Autosport teammates Ryan Norman and Taylor Hagler were third and fourth, while Victor Gonzalez Jr. was fifth in his Honda.

The second session of the day saw Davis almost immediately assert his control on the leaderboard.  The red and white Porsche was on top of the chart a mere six minutes into the session.  That time was eventually beaten by BGB Motorsports’ Spencer Pumpelly.  Davis was able to take back the quick time of the day for good halfway through the session.

Davis’ lap was two-tenths of a second faster than McQuarrie.  PF Racing’s Chad McCumbee was third in the No. 40 Ford Mustang, with Deegan close behind.  Sebastiaan Bleekemolen, Jeroen’s older brother, was fifth fastest.  Pumpelly was sixth, followed by Szymczak and Cindric.  Rebel Rock Racing’s Robin Liddell, driving the only Chevrolet Camaro GT4.R on the premises, was ninth, while Smooge Racing’s Jack Hawksworth was 10th in his Supra.

Road Shagger Racing’s Gavin Ernstone was fastest in TCR with a lap at 106.576 mph, good for 26th overall.  His lap was nearly two-thirds of a second faster than the Honda of Gonzalez.  Miller was third, then Rory van der Steur.

Unlike the other on-track sessions, a number of teams chose to sit this session out.  Only 29 of the 40 teams present in Daytona ventured onto the track.  This includes only four of the 10 TCR cars.  Notables that chose to sit out were both of the TeamTGM Porsches and all four of the Bryan Herta Autosport Hyundai Elantra N TCRs.

Michelin Pilot Challenge teams have one more on-track session Sunday morning before wrapping up the ROAR Before the 24.   Given the short amount of time between the end of the test and the start of the Rolex 24 at Daytona race weekend (three days), teams will stay in town, but load up everything that they can.