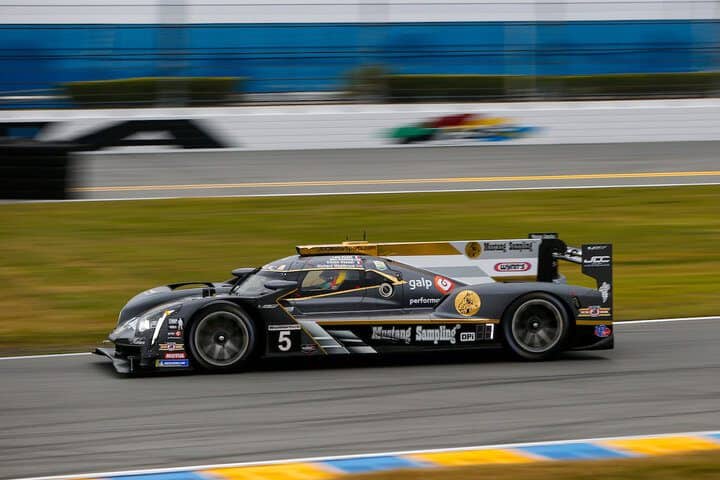 JDC-Miller MotorSports’ Tristan Vautier earned the pole position Saturday (Jan. 22) for Sunday’s Rolex 24 Qualifying Race with a lap at 136.291 mph.  To this point, it is the first time all weekend that a Cadillac DPi-V.R. has beaten both of the Acura ARX-05s.

Given the pace of the Acuras, it might come off as a surprise to see Vautier on pole, but he was consistently fast for the entire session.  Vautier put himself on top early and made that time hold.  Ganassi teammates Alex Lynn and Renger van der Zande were able to take it away, but Vautier charged back to score the pole with a lap set nine minutes into the 15-minute session.

For van der Zande, things took a turn for the worse shortly afterwards.  The Dutch racer spun in West Bend and went into the tires, drawing a red flag.  Under IMSA rules, if you cause a red flag during a qualifying session, you lose your two fastest laps.  As a result, van der Zande dropped from second on the grid Sunday to the back of the DPi class, 10th overall.

Vautier’s lap, which is the fastest of the ROAR to this point, was one-eighth of a second faster than Wayne Taylor Racing’s Filipe Albuquerque.  Lynn will start third, followed by Action Express Racing’s Tristan Nunez.  Jimmie Johnson, despite a spin exiting the infield, will start fifth.

LMP2 saw PR1 Mathiasen Motorsports sweep out the front row.  Ben Keating, who is doing double duty between the PR1 No. 52 and the JDC-Miller Motorsports No. 5 Cadillac, set a lap at 131.722 mph just seconds before the red flag flew for van der Zande’s crash.  Keating’s lap was five-eighths of a second faster than teammate Steven Thomas.  High Class Racing’s Dennis Andersen will start third, then the two G-Drive Racing by APR entries.  Francois Heriau in the No. 68 will start fourth over teammate John Falb.

GTD Pro saw KCMG’s Alexandre Imperatori put the No. 2 Porsche on pole with a lap at 120.751 mph, good for 24th overall.  Imperatori’s lap was six-hundredths of a second faster than the similar Porsche of Pfaff Motorsports’ Mathieu Jaminet.  The Lamborghini of TR3 Racing’s Andrea Caldarelli will start third, then The Heart of Racing’s Ross Gunn.  Risi Competizione’s Davide Rigon qualified his Ferrari fifth in class.

Finally, SunEnergy1 Racing owner-driver and former part-time NASCAR racer Kenny Habul put his Mercedes on the GTD pole with a lap at 120.550 mph, third fastest of all GT3 cars and 26th overall.  Habul’s lap was one-seventh of a second faster than HTP Winward Motorsport’s Russell Ward.  Crucial Motorsports’ Jon Miller will start his McLaren in third, followed by Alegra Motorsports’ Michael de Quesada.  Despite an early spin in the session, Cetilar Racing’s Roberto Lacorte qualified his Ferrari in fifth.

The Rolex 24 Qualifying Race is scheduled to go green at 2 p.m. Sunday afternoon.  The race will be streamed live on Peacock.