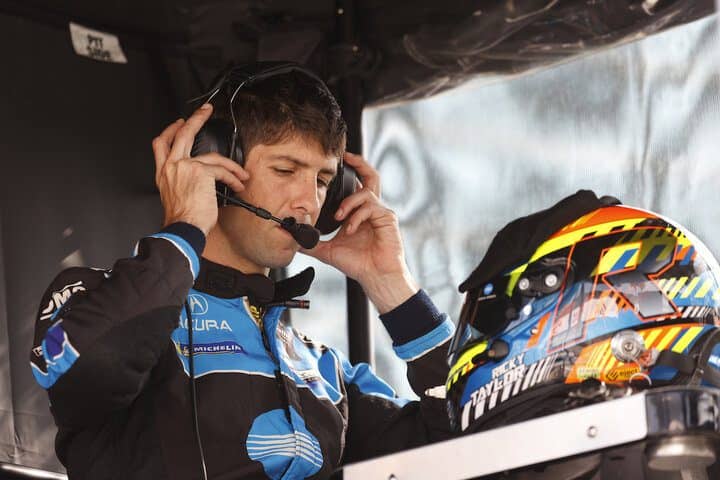 Saturday (Jan. 22) at Daytona International Speedway saw teams deal with cool weather and a little rain.  Wayne Taylor Racing’s Ricky Taylor turned in the quickest practice lap of the day with a lap at 135.487 mph.

The 60-minute session was stopped four separate times due to incidents.  First, Kyffin Simpson and Fabian Schiller ran into trouble in the opening moments of the session.  Later on, both Action Express Racing’s Richard Westbrook and United Autosports’ Guy Smith ran into trouble at West Bend to bring out the second red flag of the session.

The tough day for Simpson continued as he went off-course at West Bend during his out lap after the green came back out after the second red flag and went into the barriers fairly hard to draw another red.  The Acura NSX GT3 Evo22 was significantly damaged in the incident and the team is currently repairing with an eye towards being ready for the start of the Qualifying Race.

The #66 @InvestCayman @Cayman_Islands @unitnutritionco @HondaRacing_HPD @Acura NSX GT3 Evo22 crew are doing a phenomenal job. The garages close at 10pm tonight and by then we may know if the car will be ready to run tomorrow. Our crew RULE!!! pic.twitter.com/C0cHVqmWyN

The closing minutes of the session saw the rain finally start to fall.  With that brought a series of off-course excursions for drivers such as High Class Racing’s Dennis Andersen and Performance Tech Motorsports’ Nico Pino.  With three minutes to go, the fourth red flag was displayed, ending the session early.

Before the rains came, Acura continued to show their dominance.  Wayne Taylor Racing’s Filipe Albuquerque was fastest overall with a lap at 134.981 mph.  Albuquerque was four-tenths of a second faster than Action Express Racing’s Mike Conway.  Meyer Shank Racing with Curb-Agajanian’s Helio Castroneves was third, then Sebastien Bourdais and Mike Rockenfeller.

Tower Motorsport’s Ferdinand Habsburg was fastest in LMP2 with a lap at 132.520 mph, good for seventh overall.  Habsburg was nearly a quarter of a second faster than High Class Racing’s Fabio Scherer.  PR1 Mathiasen Motorsports teammates Nicolas Lapierre and Jonathan Bomarito were third and fourth, while DragonSpeed’s Patricio O’Ward was fifth.

Northwest AMR’s David Pittard was fastest of all the GT cars in his Aston Martin.  Pittard’s lap at 120.513 mph was good enough for 24th fastest.  The lap was a quarter of a second faster than TR3 Racing’s No. 19 Lamborghini for Giacomo Altoe.  GMG Racing’s Klaus Bachler put his Porsche third in class, then Magnus Racing’s Andy Lally and Crucial Motorsports’ owner-driver Paul Holton.

GTD Pro was led by WeatherTech Racing’s Dirk Mueller with a lap at 120.289 mph, 25th overall.  Mueller was one-tenth of a second faster than teammate Alessio Picariello.  The KCMG Porsche of Dennis Olsen was third fastest, while the Lexus of Vasser Sullivan’s Ben Barnicoat was fourth.  TR3 Racing’s Rolf Ineichen was fifth.

The final test session of the weekend saw teams take on the 3.56-mile road course at Daytona International Speedway at night.  Chilly weather (by Central Florida standards) meant that grip was at a premium, but teams continued their preparations.

Like the early session, there were a series of incidents.  50 minutes in, Muehlner Motorsports America’s Nolan Siegel spun at the bus stop chicane to cause the first red flag.  Following a 25-minute stint in the garage, the No. 26 team returned to the track.

Later on, debris at the exit of the infield brought out another red flag.  With 26 minutes remaining when that ended, teams were trying their darndest to set their best times.  Unfortunately, that can lead to more contact.  TR3 Racing’s Marco Mapelli and Inception Motorsport’s Ollie Millroy collided and spun out.  Millroy tried to limp his McLaren back to the garage, but stalled on the inside of turn 3 to draw another red flag.  Mapelli was judged to be responsible for the incident and had to serve a drive through penalty.

Speed-wise, Meyer Shank Racing with Curb-Agajanian’s Helio Castroneves was fastest early on before Conway took the top spot.  Taylor’s best lap with 20 minutes remaining in the session, just before the Mapelli-Millroy collision.  This came despite contact earlier in the session with a Porsche that led to a garage visit for repairs.

Taylor’s lap ended up being a mere two-hundredths of a second faster than Chip Ganassi Racing’s Scott Dixon.  Dixon’s Cadillac was repaired after teammate Renger van der Zande crashed in West Bend during the qualifying session earlier in the day.

Conway ended up third quickest, followed by Castroneves and Jose Maria Lopez in the No. 48 Ally Cadillac.  The top five drivers were separated by just over three-tenths of a second.

In LMP2, G-Drive Racing by APR’s Rene Rast was fastest with a lap at 133.675 mph, good for eighth overall.  Rast’s lap was two-tenths of a second faster than Mikkel Jensen in the PR1 Mathaisen Motorsports No. 52.  High Class Racing’s Nico Mueller was third, then James Allen in the second G-Drive Racing entry.  Harry Tincknell was fifth in the PR1 Mathiasen Motorsports No. 11.

Forty7 Motorsports’ Trenton Estep was fastest in LMP3 with a lap at 124.934 mph, 18th overall.  Estep’s lap was six-hundredths of a second faster than Sean Creech Motorsport’s Malthe Jakobsen.  Riley Motorsports’ Felipe Fraga was third, then Garret Grist and Bell.

GTD Pro was led by Mirko Bortolotti in TR3 Racing’s No. 63 with a lap at 121.183 mph, the fastest lap in the class to this point of the weekend.  Bortolotti’s lap was one-eighth of a second quicker than Laurens Vanthoor in the KCMG Porsche.  WeatherTech Racing’s Matteo Cairoli was third in the WeatherTech No. 79 Porsche, while Vasser Sullivan’s Jack Hawksworth was fourth in the No. 14 Lexus.  Felipe Nasr, who will make his GT debut for Pfaff Motorsports next weekend, was fifth.

Holton was fastest in GTD with a lap at 133.549 mph, third of all GT cars and 29th overall.  Holton was four-hundredths of a second faster than Wright Motorsports’ Richard Lietz and less than a quarter of a second ahead of Altoe.  Northwest AMR’s Charlie Eastwood was fourth, while Alegra Motorsports’ Maximilian Goetz was fifth.

59 of the 61 teams turned in laps during the session.  Those who did not venture on-track were TeamTGM’s No. 64 Porsche and Gradient Racing’s Acura.  For Gradient Racing, the team spent the session continuing to repair the car after Simpson’s crash in Session No. 3.

For TeamTGM, it came down to the rain that fell during the afternoon during the Prototype Challenge race and after Pilot Challenge Session No. 4.  As Hugh Plumb explains, it just wasn’t worth it to the team.

Team TGM called Day ✌️ at the #Roar24 early after rain fell over @DAYTONA this afternoon. @HughPlumbRacing explains why it made the most sense to prepare for Sunday’s busy schedule instead.
–#IMSA | #Roar24 | #Rolex24 pic.twitter.com/DHxFv0cfBk

During the Rolex 24 at Daytona weekend, the team won’t be able to use this strategy.  In events run at night, IMSA mandates that certain drivers get time in the car during the night practice session.  As TeamTGM is a part-time entry in the series, they would have to take part.

The Rolex 24 Qualifying Race is scheduled to go green at 2 p.m. Sunday afternoon.  The race will be streamed live on Peacock.