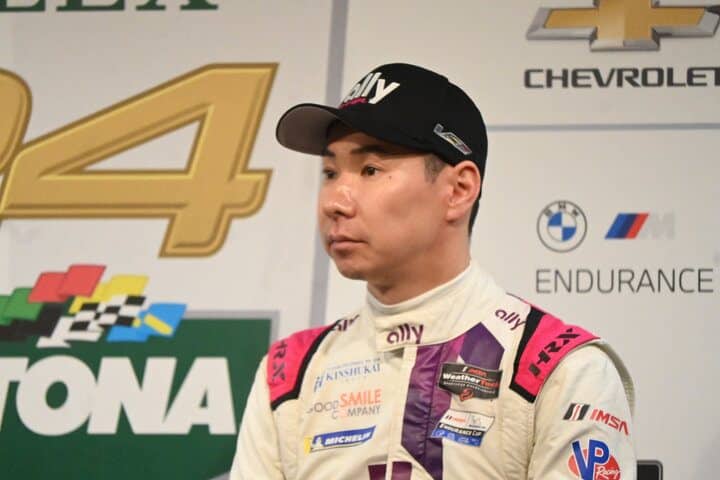 DAYTONA BEACH, Fla. – Much like Michelin Pilot Challenge teams, IMSA WeatherTech SportsCar Championship teams had to dodge the rain on Thursday.  Action Express Racing’s Kamui Kobayashi ended up being fastest in the first two sessions with a lap at 134.241 mph at the driest time of the day.

Thursday’s first practice session started out with light drizzle and a moist racing surface.  Much like both of the Michelin Pilot Challenge practices, those who went out immediately were able to put down a decent lap time.

In this scenario, it was Wayne Taylor Racing’s Filipe Albuquerque that put himself at the top of the leaderboard, multiple seconds ahead of the rest of the DPi class.  Then, the rain picked up and times fell off.

Late in the session, the rain stopped and the track began to dry a little, aided by a stiff breeze from the east.  A number of teams went back out onto the 3.56-mile road course in order to try to improve their times once again.  One of those drivers was DragonSpeed’s Patricio O’Ward.

O’Ward has some experience in LMP2 competition from his time running for Performance Tech Motorsports.  Right at the end of the session, O’Ward turned in a lap at 117.308 mph to beat all of the DPi cars and lead the session overall.

O’Ward’s lap was a full second and a half faster in class than High Class Racing’s Nico Mueller.  Racing Team Nederland’s Giedo van der Garde was third in class, then Era Motorsport’s Paul-Loup Chatin.  G-Drive Racing by APR’s Luca Ghiotto moved up to fifth right at the end of practice.

In DPi, Albuquerque’s time was on top of the chart for more than half an hour.  Then, the rain stopped and the track began to dry.  Enter Earl Bamber in Chip Ganassi Racing’s burgundy No. 02 Cadillac.  Bamber set a lap at 117.291 mph, which held up to top the class, only 16-thousandths of a second slower than O’Ward’s lap.

Bamber’s lap was a second and a half faster than Albuquerque, who didn’t come for the second half of the session.  Meyer Shank Racing with Curb-Agajanian’s Oliver Jarvis was third, then Chip Ganassi Racing’s Sebastien Bourdais and Action Express Racing’s Mike Conway in their Cadillacs.

SunEnergy1 Racing’s Luca Stolz was fastest in GTD with a lap at 108.226 mph, 16th overall.  While he was right behind Jaminet in the GT speed chart, he was still a full one and five-eighths seconds behind the red and silver Porsche.  Stolz was a half-second faster than the McLaren of Inception Racing’s Jordan Pepper.  Alegra Motorsports’ Maximilian Goetz was third in his Mercedes, then Hardpoint’s Katherine Legge.  Franck Perera in the T3 Motorsport North America Lamborghini was fifth.

Finally, the LMP3 cars had the most trouble coming to grips with the wet surface and ended up further down the leaderboard than they normally would be.  At the end of the session, Andrew Wojteczko Autosport’s Matt Bell ended up quickest with a lap at 107.496 mph, 26th overall.

Bell’s lap was a mere thousandth of a second faster than Muehlner Motorsports America’s No. 26 with Cameron Shields at the wheel.  Remember that Shields was very quick during the Rolex 24 Qualifying Race on Sunday before mechanical gremlins ruined their day.  Shields’ teammate Ayrton Ori in the No. 6 was third, making for a Duqueine 1-2-3.  Riley Motorsports’ Felipe Fraga was fourth.

The 90-minute session had no red flags.  However, there were plenty of spins.  No less than a dozen drivers spun out during the session.  Cetilar Racing’s Roberto Lacorte spun his Ferrari three times, each occurring at a different spot on the track.  Racing Team Nederland owner/driver Frits van Eerd had two incidents, but one at turn 6 damaged the No. 29 ORECA 07-Gibson.

Due to the conditions, only 47 of the 61 teams set times during the session.  Of the 14 that didn’t, 11 never ventured onto the track.  The other three (CORE autosport, Wright Motorsports and WeatherTech Racing’s No. 79 Porsche) went out briefly, but never set official times.

The afternoon practice session was somewhat similar to the first one.  The track was more or less the driest that it had been all day in the first 30 minutes of the session.  Following the Pro-Am exclusive portion of the session, the DPi teams were somewhat reticent about venturing out since the rain was not far away from blowing over the track once again.

With that said, those who did go out had plans to go fast as soon as possible.  Kobayashi ended up setting the fastest lap of the day on his second lap at speed.  The precipitation returned shortly afterwards, allowing the time to stand up.

Kobayashi’s lap was nearly a second and a half faster than Conway.  Ricky Taylor was third fastest in the Wayne Taylor Racing Acura, but he didn’t go until the rain had moistened the track back up.  As a result, he was 13 seconds off the pace.  Marcus Ericsson was fourth, while Richard Westbrook was fifth.

LMP2 teams weren’t beholden to the 15-minute wait at the beginning of the session.  As a result, there was a parade of ORECA 07s going onto the track as soon as the officials opened the track.

Van der Garde was fastest early on in the No. 29 JUMBO entry that had been repaired after an incident in the first session.  However, High Class Racing’s Nico Mueller, who was fast during the first session, set a lap at 132.107 mph 12 minutes into the session that ended up being the fastest lap in class and third overall.

Nico’s lap was one-eighth of a second faster than G-Drive Racing with APR’s Ed Jones.  DragonSpeed’s Devlin DeFrancesco was third in his yellow and orange No. 81, followed by van der Garde.  United Autosports’ Guy Smith was fifth quickest.

Fraga was fastest in LMP3 with a lap at 124.182 mph, good for 11th overall.  Fraga was one-seventh of a second faster than Performance Tech Motorsports’ Garret Grist.  Sean Creech Motorsport’s Joao Barbosa was third fastest, while Bell was a half-second behind Barbosa in fourth.  CORE autosport’s Jon Bennett was fifth.

In the GT ranks, HTP Winward Motorsport’s Mikael Grenier in the GTD class ended up being the fastest of all with a lap at 120.251 mph, 17th overall.  Grenier was a quarter of a second faster than Goetz and Crucial Motorsports’ Patrick Gallagher.  Vasser Sullivan’s Aaron Telitz was fourth in his Lexus, while Northwest AMR’s Nicki Thiim was fifth.  The top 13 GTD cars, thanks to Pro entries being excluded from the first 15 minutes of the session, beat the best GTD Pro cars.

As a result of a lack of dry track time, the best GTD Pro lap was set by Vasser Sullivan’s Jack Hawksworth.  Hawksworth’s lap at 117.875 mph was only 30th overall, but still nine-tenths of a second faster than Juncadella.  Dirk Mueller was third, then Garcia and BMW M Team RLL’s Sheldon van der Linde.

There was one red flag during the session.  Forty7 Motorsports’ Trenton Estep spun in the bus stop chicane and appeared to have contact with the outside wall.  Estep drove away from the scene, but his Duqueine M30-D08-Nissan had smoke coming from the left front corner of the vehicle.  In order to prevent further damage to the car, Estep stopped on the apron of turn 4 of the tri-oval to bring out the red flag and get towed back.  The car did not return to the track for the remainder of the session.

There are two more WeatherTech practice sessions this weekend.  First up is night practice at 7:15 p.m.  The weather is still sketchy with intermittent rain and fog in the area.  We’ll have a recap of that and the final practice Saturday.