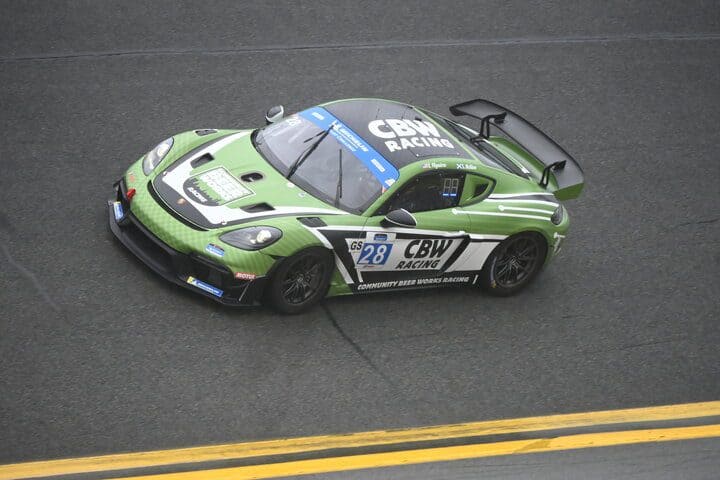 DAYTONA BEACH, Fla. – For IMSA Michelin Pilot Challenge teams, they were greeted with rainy weather both Wednesday (Jan. 26) and Thursday (Jan. 27) at Daytona International Speedway.  In slightly drier times at the beginning of Wednesday’s session, Rennsport One’s Eric Filguerias ended up fastest overall with a lap at 104.204 mph.

The weather forecast for Wednesday originally called for rain showers in the morning that were supposed to move out and leave cloudy skies.  That didn’t come to pass as it rained for the entire 60-minute session.  While it wasn’t a hard rain, it was quite steady and picked up in intensity as the session continued on.

Given the fact that the rain picked up in intensity as the session continued, the best laps were turned in at the very beginning of the session.  Filguerias, who is making his debut for Rennsport One in a new Porsche this weekend, turned in a lap on his second lap at speed at 104.204 mph.  Despite the fact it was completed just seven minutes into the session, Filguerias’ time held up to be the fastest lap of the day.

Filguerias’ lap was more than three-quarters of a second faster than CarBahn Motorsports with Peregrine Racing’s Tyler McQuarrie in a similar Phoenix.  Smooge Racing’s Jack Hawksworth was third fastest in his Toyota Supra GR GT4, then Eric Foss in the Murillo Racing No. 56.  Riley Motorsports’ Scott Andrews was fifth in his Supra.

BGB Motorsports’ Spencer Pumpelly was sixth in his Porsche, followed by PF Racing’s Hailie Deegan, who continues to impress after showing good form during the ROAR Before the 24.  Black Swan Racing’s Jeroen Bleekemolen was eighth quickest, while Rebel Rock Racing’s Robin Liddell and Christian Szymczak in the Murillo Racing No. 72 rounded out the top 10.

In TCR, JDC-Miller MotorSports’ Mikey Taylor was fastest with a lap at 98.180 mph, good for 28th overall.  Taylor’s lap was three-sevenths of a second faster than Bryan Herta Autosport’s Michael Lewis in the best of the Elantras.  Teammate Ryan Norman was third.  Tyler Gonzalez in the sole Hyundai Veloster N TCR was fourth, while AOA Racing’s Gino Manley was fifth in his Audi RS3 LMS DSG.

There were two red flags during the session.  The first came when Road Shagger Racing’s Gavin Ernstone stopped his Audi RS3 LMS Sequential in the infield near West Bend.  The second saw Murillo Racing’s Jeff Mosing spin his Mercedes off at turn 1.

Given the weather situation, lap times were approximately 10 seconds slower than during the ROAR.  Also, only 43 of the 48 teams set times during the session.  Those teams that chose not to participate at all were both TeamTGM Porsches and Bryan Herta Autosport’s No. 77 Hyundai.  The McCann Racing Porsche only completed an out lap during the session, while Ernstone had his on-track issues on his out lap.

The second session on Thursday ended up being very similar to Wednesday’s practice.  The day dawned cloudy and dry, but as practice came closer, it started to spritz rain.  By the time the session started, the track was wet enough to once again require rain tires.

On his very first lap at speed, Bleekemolen turned in a lap at 103.029 mph.  That held up to be the fastest lap of the session.

In TCR, Lewis was fastest with a lap at 97.824 mph, 29th overall.  His lap was a third of a second faster than Taylor.  Mark Wilkins in the No. 33 Hyundai was third, then Road Shagger Racing’s Jon Morley.  Stephen Simpson was fifth fastest.

Similar to the first session, there were two red flags.  Unlike Wednesday, these incidents were more serious.

A few minutes into the session, contact was made between the NTe Sport Aston Martin of Romeo Kapudija (on his out lap from the pits at the time) and the BMW of Random Vandals Racing’s Al Carter exiting the International Horseshoe.  While Kapudija ground to a halt, Carter spun his BMW and hit the Armco barrier to draw the first red flag.  Frontstretch just so happened to be right there when it happened.

The red flag is out as @alcarter3 and Romeo Kapudjia collided exiting the International Horseshoe. Carter spun and made contact with the wall right in front of us. #BMWMEndurance pic.twitter.com/x1gZgYuGJ0

Both Carter and Kapudija walked away from the crash.  As of this writing, the Random Vandals team currently has their BMW up on jack stands in front of their garage stall and are attempt to fix the car.

Later on in the session, Belgard & Techniseal Racing’s Alex Rockwell went straight off at the International Horseshoe and slid on the wet grass into the tires.  This brought out the second red flag.

Got another red flag here at @DAYTONA. Alex Rockwell has crashed the No. 15 Audi into the tires in the International Horseshoe. Appeared to just go straight. pic.twitter.com/CdUHBOHYbG

Rockwell walked away from the Audi, but appeared to be rather disappointed afterwards.  The Belgard & Techniseal team is currently attempting to repair their car.

Of the 48 cars present, 45 set times during the session.  The NTe Sport No. 12 did not because of the aforementioned crash.  Meanwhile, McCann Racing and TeamTGM’s No. 64 Porsche only did out laps.

Qualifying for Friday’s BMW M Endurance Challenge is scheduled for 2:25 p.m. Thursday afternoon.  With precipitation coming off of the Atlantic Ocean continuing to move towards the track, conditions may end up being similar when the field is officially set.