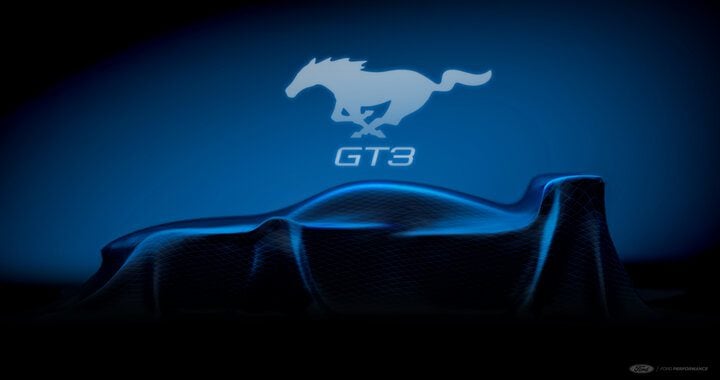 DAYTONA BEACH, Fla. – At Daytona International Speedway Friday morning (Jan. 28), Ford Performance announced that they will be building a brand new Ford Mustang GT3 that will be eligible to race in the IMSA WeatherTech SportsCar Championship’s GTD Pro and GTD classes starting in the 2024 season when new GT3 regulation.  It will be the first factory-supported GT3 car for Ford.

Ford Performance will also re-ignite their relationship with Multimatic out of Canada in the development of the car.  The Canadian company is best known in recent years for helping with the development of both the Ford GT street car and race cars.

In addition, Ford Performance will partner with M-Sport Ltd. for development of the 5.0-liter Coyote V8 engine that will power the Mustang GT3.  MSport Ltd. is likely best known for racing in Europe.  Their most recent new car is the Ford Puma Rally1, which debuted last weekend in the Monte Carlo Rally, the season opener for the World Rally Championship.  Sebastien Loeb used that Puma to claim his 80th career WRC victory.

M-Sport does have experience in GT3 competition.  They ran Bentley’s factory program in Europe and were successful there, winning races with the Bentley Continental GT3.  The last major victory for the marque was the Intercontinental GT Challenge Liqui-Moly Bathurst 12 Hour in 2020.

Joey Hand, who raced as part of the Ford Chip Ganassi Racing factory team in IMSA from 2016-2019, will serve as the official test driver for the new GT3 car.  There is no official design as of yet, but work is already underway.  Ford plans to be testing the new car in 2023 in front of a 2024 debut.

Finally, Ford Performance announced that they will field their own two-car team in the IMSA WeatherTech SportsCar Championship’s GTD Pro class in 2024.  That team, much like Ford’s primary programs in the past in IMSA Michelin Pilot Challenge, will be run by Multimatic.

“[The] Mustang was born to race from the start and we’re thrilled to introduce the GT3 version to compete head-to-head against some of the greatest manufacturers in the world,” said Mark Rushbrook, Ford Performance’s motorsports global director.  “With 58 years of global endurance racing heritage, including NASCAR and Australian Supercars today, we are ready to take Mustang to the next level of global performance.”

In additional news, Ford is also developing a new Ford Mustang GT4.  This new car is scheduled to debut in 2023.  It is unclear which race would be the first race for the car, but the Michelin Pilot Challenge season opener next year is a candidate, as would be the Creventic-run Hankook 24H Dubai.

“It’s important to us to continue to support the Mustang GT4 effort as well,” Rushbrook continued.  “We’ve had a lot of success both here and in Europe with the current Mustang GT4, and we look forward to being able to provide our customers with a brand new car for competition in the GT4 category starting next season.  We’ll have more to say on that in the near future.”

The current Ford Mustang GT4 debuted back in 2017 and is now in it’s sixth year of racing.  The car races using bodywork that dates back to 2015.  It never received the bodywork refresh that street Mustangs got for the 2018 model year.

The Mustang GT4 also raced competitively in GT4 competition in SRO America and in the GT4 class of the Intelligent Money British GT Championship.  In 2019, Priaulx and Scott Maxwell finished second in GT4 points with two class wins.