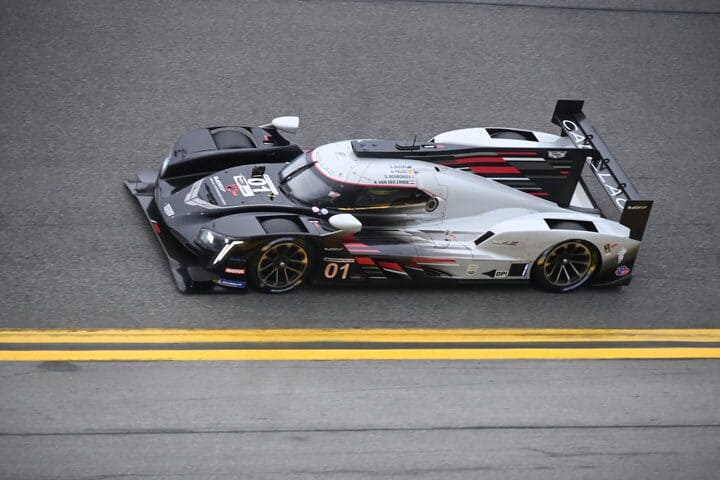 Thursday night (Jan. 27) saw the IMSA WeatherTech SportsCar Championship teams venture onto the track for 105 minutes of night practice.  Normally, this is another critical session since there are few endurance races with as much time in the dark as the Rolex 24 at Daytona.  Once again, the weather did not really cooperate.  As a result, rain that came back with a vengeance during the first Mazda MX-5 Cup race of the weekend held on through the first half-hour of the session.  That kept speeds down.

For much of the early portion of the session, JDC-Miller MotorSports’ Tristan Vautier was quickest.  Once the rain stopped, the track tried to dry out a little, but it’s much harder for that to happen at night as opposed to during the day, regardless of how much wind is around (and there was quite a bit).  During this time, Wayne Taylor Racing’s Filipe Albuquerque set a lap at 117.870 mph, which held to be the fastest lap of the session.

Albuquerque’s lap was three-quarters of a second faster than the Cadillac of Chip Ganassi Racing’s Alex Palou.  Meyer Shank Racing with Curb-Agajanian’s Tom Blomqvist was third in his Acura.  He was ultimately responsible for the session’s only red flag when he stopped on-course in turn 2 27 minutes in.  The car was easily repaired and Blomqvist set his best lap of the session less than 10 minutes later.  Vautier ended up fourth.

After the first 35 or so minutes, you didn’t really see many drivers trying to set quick times in the DPi class other than Albuquerque.  The focus shifted to scrubbing (or scuffing) in sets of tires for the expected chilly weather Saturday night.  While a lot of this scrubbing was done on slick tires, very few competitive times were set in the class.

The LMP2 teams tended to be the workhorses during night practice, putting down lap after lap.  The tricky conditions meant that they were quite a bit closer to the DPi than they would ordinarily be.  35 minutes in, G-Drive Racing by APR’s Rene Rast was fastest overall in the session.

Tower Motorsport’s Ferdinand Habsburg was fastest for the vast majority of the session, but Luca Ghiotto in the No. 69 entry from G-Drive Racing by APR topped him in the final 15 minutes of the session with a lap at 116.938 mph, good enough for fourth overall.

Ghiotto’s lap was a full two seconds faster than Habsburg, who set his lap when the track was wetter.  DragonSpeed’s Patricio O’Ward was third, followed by Rast and High Class Racing’s Anders Fjordbach.

WeatherTech Racing’s Daniel Juncadella was quickest in GTD Pro with a lap at 108.215 mph, 13th overall.  His lap was a quarter of a second faster than Pfaff Motorsports’ Matt Campbell.  TR3 Racing’s Andrea Caldarelli was third in his Lamborghini, while Corvette Racing’s Marco Sorensen was fourth.  Matteo Cairoli in the WeatherTech Porsche was fifth.

Finally, SunEnergy1 Racing’s Raffaele Marciello was quickest in GTD with a lap at 108.180 mph, 14th overall and one-seventh of a second slower than Juncadella for the fastest GT time in the session.  Marciello was nearly a quarter of a second faster than the T3 Motorsport North America Lamborghini of Franck Perera, who was quickest in class off and on during the session.  Alegra Motorsports’ Daniel Morad was third in his Mercedes, followed by the McLaren of Inception Racing’s Ollie Millroy.  CarBahn Motorsports with Peregrine Racing’s Robert Megennis was fifth in his Lamborghini.

54 of the 61 teams set official times during the session.  Three of these teams were Cadillac DPi teams.  They all ventured on-track during the session to scrub tires, but never posted official laps.  Those who didn’t go out at all were the KCMG Porsche, both Heart of Racing Aston Martins and the BMW M Team RLL No. 25.

After the second Mazda MX-5 Cup race, yet another rain shower briefly moistened the 3.56-mile road course.  This kept speeds down early as the cars had to run the moisture off of the track.  However, once that was complete, the times rapidly dropped.

Unlike the other three practice sessions, Cadillac dominated the top of the chart as Pipo Derani and Mike Rockenfeller were quickest in their Cadillacs early on.  Bourdais’ quick time came two-thirds of the way through the one-hour session.

Bourdais’ lap was one-third of a second faster than JDC-Miller MotorSports’ Loic Duval.  Jose Maria Lopez in the Ally Cadillac was third, then Earl Bamber in the second Ganassi Cadillac.  Derani ended up fifth.

Rasmus Lindh was fastest in LMP3 for Andretti Autosport with a lap at 123.714 mph, 18th overall.  Lindh’s best lap was nearly eight-tenths of a second faster than Moritz Kranz in the Muehlner No. 6.  Charles Crews in the Muehlner No. 26 was third, followed by Forty7 Motorsports’ Trenton Estep.  Joao Barbosa was fifth in the Sean Creech Motorsport No. 33.

GTD Pro was led by TR3 Racing’s No. 63 Lamborghini for Mirko Bortolotti with a lap at 120.809 mph, 24th overall.  The lap was a quarter of a second faster than Cairoli, with Vasser Sullivan’s Jack Hawksworth close behind.  WeatherTech Racing teammates Jules Gounon and Dirk Mueller were fourth and fifth, respectively.

In GTD, it was Wright Motorsports’ Jan Heylen who was fastest in the No. 16 Porsche with a lap at 120.452 mph, 27th overall and three-tenths of a second slower than Bortolotti.  Heylen’s lap was nearly three-tenths of a second faster than Marciello’s Mercedes.  Alegra Motorspors’ Michael de Quesada was third, then Gilbert/Korthoff Motorsports’ Mike Skeen.  Gradient Racing’s Mario Farnbacher was fifth in the sole Acura NSX in the field.

The Rolex 24 at Daytona is scheduled to start at 1:40 p.m. ET Saturday afternoon.  Coverage will start at 1:30 p.m. ET on NBC.  Check your local listings to see if your affiliate is carrying the coverage.  The remainder of the race will switch to USA at 2:30 p.m., then switch back and forth between USA and Peacock before returning to NBC for the finish.