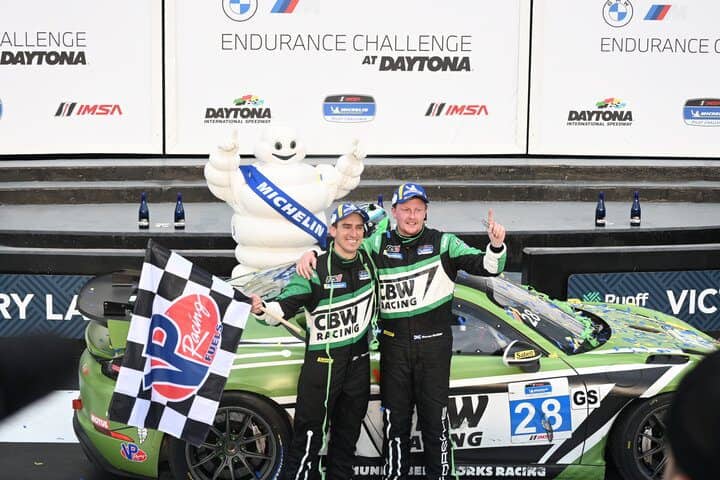 DAYTONA BEACH, Fla. – Rennsport One’s Stevan McAleer ran down TeamTGM’s Owen Trinkler and drafted by him in turns 3 and 4 of Daytona International Speedway’s tri-oval with 13 minutes to go Friday (Jan. 28).  From there, McAleer pulled away to claim victory for himself and teammate Eric Filguerias in the BMW M Endurance Challenge, the season opener for IMSA Michelin Pilot Challenge.

“Owen [Trinkler] was no joke,” McAleer stated during his post-race press conference.  “He didn’t really make a mistake.  I think that we had the better car.  I could harass him and force him into making a mistake.  I got a run on him exiting turn 6 and that’s where it really took off.  I went into the [Le Mans chicane] and that was the closest that I’d been.”

McCann Racing’s Andrew Davis started on pole with KohR Motorsports’ Billy Johnson alongside.  Johnson got a little too eager on the start.  He ended up changing lanes prior to the start-finish line.  Much like in NASCAR, that is forbidden.  As a result, Johnson got a drive-through penalty and dropped to the rear of the field.

Johnson’s penalty left Davis in the lead with McAleer trying to run him down.  That took only a few laps before the lead change occurred on lap 6, when McAleer took the lead exiting the International Horseshoe.  An early caution due to Harry Gottsacker stalling his Hyundai led to a split pit strategy.  Most of the field pitted, including McAleer.  Davis chose to stay out and re-took the lead.

Davis stayed out until JDC-Miller MotorSports’ Chris Miller had mechanical issues and pulled to a stop exiting the International Horseshoe.  Davis and the McCann Racing team noticed Miller’s issues and immediately called Davis into the pits.  They just barely made it before the yellow came out.

Over the course of a run, Johnson’s No. 59 Ford Mustang GT4 was the best car in the field Friday.  After his penalty, he had to overtake the entire field.  He was already back to 20th when the first yellow flew.  Here, he pitted and gave way to Bob Michaelian.  A decent pit stop put Michaelian 13th.  From there, he raced into the top 10.  Johnson got back in the car on lap 42 and immediately made his presence known with the leaders.

Filguerias ended up in the overall lead when Davis made his first pit stop.  Once there, the series debutant was able to pull away from the pack to the tune of seven seconds.  Once McAleer got back in the car, he was still leading, but Johnson was on the move.  It did not take long for Johnson to put the moves on McAleer.

Once out front, Johnson pulled away from the pack and looked good to take the victory.  Then, the Coyote V8 engine turned traitor, billowing out heavy smoke.  Johnson was forced to retire with a little over an hour to go while leading the race overall.

Johnson’s troubles gave the overall lead over to TeamTGM’s Owen Trinkler, who was quite strong in his Porsche.  However, the final round of stops, which occurred under the fourth full course caution, shook up the field.  Trinkler had a bad pit stop and dropped to fourth behind Turner Motorsport’s Bill Auberlen.

On the restart, Trinkler swept all the way onto the apron to sweep all the way back up to second.  A lap later, Trinkler got by Auberlen for the overall lead.

McAleer restarted fifth and methodically made his way forward.  In the closing laps, he was clearly faster than Trinkler, who had already been in the car for the better part of three hours.  Once the pass was made, McAleer pulled away for the win.

Leading into the race, Hailie Deegan was one of the stars of the weekend.  She had qualified fourth and been among the fastest drivers in Daytona.  She ran well in the race as well until she spun out of the top five on a restart.  That put Deegan down in the 20s, something that the No. 42 team could never recover from.  An additional penalty for Chase Briscoe due to avoidable contact resulted in Briscoe and Deegan finishing two laps down in 24th.

The TCR class saw Tyler Maxson start on pole, but he quickly lost the lead to KMW Motorsports with TMR Engineering’s Tim Lewis Jr.  Early on, Miller was the fastest driver out there in his Audi.  It very well could have been a repeat victory for the team, but the on-track stall early on ended their chances of winning.  They still finished, but they were 10th in class, 16 laps down at the finish.

After the Miller issues, Cameron Lawrence took the Honda of America Racing Team (HART) Civic to the top of the leaderboard.  The car, which hadn’t raced for two years, was running very competitively despite the break.  However, a track like Daytona is very hard on suspension parts.  Lawrence ended up retiring from the race due to a broken front axle.

Another team that had a good run end early was Road Shagger Racing.  Gavin Ernstone was running second in class when he lost control exiting the newly renamed Le Mans chicane.  The No. 61 Audi spun and broadsided the SAFER Barrier drivers side first to bring out the third full course caution.  Ernstone spent a while gathering himself before getting out and walking to the ambulance.  There hasn’t been any word on injuries, but he’s more than likely very sore after the wreck.

The race ultimately came down to a penalty situation.  During the final caution, everyone came in for tires and fuel.  A number of the stops were very quick.  Bryan Herta Autosport’s Stephen Simpson came into the pits with the lead and appeared to exit them with it as well.  However, Simpson ran the red light at the end of the pit lane.  This is a no-no and is penalized with a stop and 60-second hold under green.  At Daytona, that is all but a one-lap penalty.

Block and Tim Lewis Jr.’s margin of victory was 9.524 seconds over Michael Lewis and Taylor Hagler.  Robert Wickens, in his return to racing after his Pocono crash, ended up third with Mark Wilkins.  More or less mission accomplished for Wickens.

“It feels pretty good [to podium first time out],” Wickens said after the race.  “The goals for today were to not lose spots on the first lap.  I think I did that.  Regardless of what happened, I wanted to get my drive time in and learn the car.  During the ROAR [Before the 24] and practices, I never got more than five to seven laps in the car at a time.  I just wanted consecutive laps to see how the tire wears away, how the rear feels and how it changes going from full fuel to lighter fulel.”

IMSA Michelin Pilot Challenge teams will be off for the next six weeks before returning to action at Sebring International Raceway.  The Alan Jay Automotive Network 120, the first sprint race of the season, is scheduled for Mar. 17 at 4:20 p.m. ET.