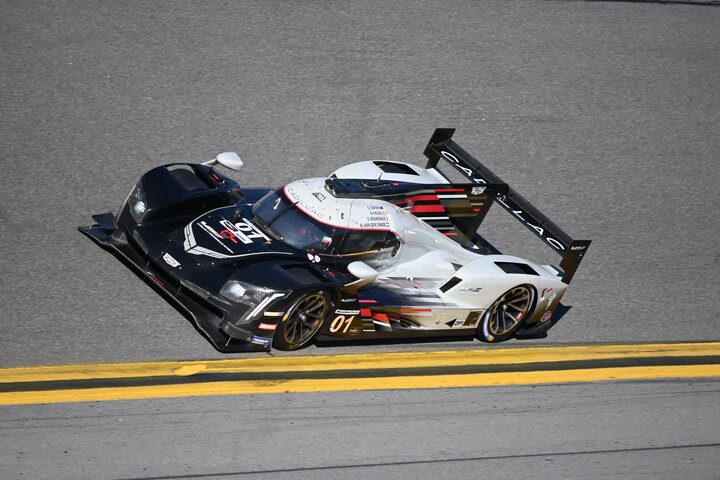 DAYTONA BEACH, Fla. – The first quarter of the Rolex 24 at Daytona has been attrition-filled with multiple on-track incidents and a number of mechanical issues sending teams behind the wall.  As of the end of the sixth hour, Chip Ganassi Racing’s Scott Dixon was leading the race overall.  At the time, the race was under the fourth full course caution.

Wayne Taylor Racing’s Filipe Albuquerque started on the pole, but immediately lost the advantage to JDC-Miller MotorSports’ Tristan Vautier on the start.  Despite all the speed shown during the ROAR Before the 24 by the two Acuras, the Cadillacs have led the vast majority of the race thus far.

Action Express Racing’s Kamui Kobayashi drove up to the lead early on, then had contact with Chip Ganassi Racing’s Sebastian Bourdais.  Bourdais was not exactly pleased with the situation, given how early in the race it was.

When asked about the aggressiveness of @kamui_kobayashi early on, @BourdaisOnTrack simply responds, "That's Kamui." Thinks that Kobayashi is too aggressive early on in a 24-hour race and no one does anything about it. #Rolex24

Both of the Acuras for Wayne Taylor Racing and Meyer Shank Racing with Curb-Agajanian have led the race overall, but ended up having tire punctures that put them way behind.  This happened first to Helio Castroneves.  He cut his left rear tire after contact.  The fender rub cracked the left rear fender, but he was able to get back to the pits without severe damage.

Will Stevens had just lost the overall lead to Renger van der Zande when contact in turn 1 cut his right rear tire.  Having to limp around for three miles at reduced speed dropped the defending champions two laps down.

At the six-hour mark, Dixon had a 1.874 second lead over Action Express Racing’s Mike Conway.  JDC-Miller MotorSports’ Loic Duval was third, followed by Kevin Magnussen, completing a Cadillac 1-2-3-4.  Simon Pagenaud was fifth in the Meyer Shank No. 60.

There have been four full-course cautions to this point.  The first came 49 minutes into the race when Era Motorsport’s Dwight Merriman ran up on a slower car and spun under braking for turn 6.  Merriman ended up hitting the wall fairly hard.

Merriman was ok and the team was able to continue.  However, IMSA forced Merriman to get out of the car when it wasn’t really necessary, as teammate Ryan Dalziel explained here.

Not the start we hoped for. Dwight got caught out with a P3 car and spun into wall. Only damage we had was the front nose which is a 20s fix but IMSA forced him to get out the car and instead of loosing max 2 laps we lost 10 laps waiting for the car to be trailered back to pits.

In the clip above, you can see a track marshal going to the ground.  As per IMSA, he has been taken to a local hospital for observation.  He was said to be aware and alert with good vital signs.

The second caution flew in the fourth hour when GMG Racing’s Kyle Washington lost control exiting the Kink and hit the wall hard with his Porsche.  While the car has not officially been retired, it appears unlikely that it will return.  Washington got out of the car under his own power and appears to be ok.

Shortly after the restart from the Washington crash, Heart of Racing’s Alex Riberas and SunEnergy1 Racing’s Kenny Habul collided exiting the infield and shot up into the SAFER Barrier in front of much of the field.  In the scattering that occurred afterwards, Riberas was hit by Muehlner Motorsports America’s No. 6 Duqueine M30-D08-Nissan driven by Ayrton Ori.  CarBahn Motorsports with Peregrine Racing’s Lamborghini driven by Sandy Mitchell at the time also suffered damage.  Ori’s car only just returned to the race.  Both Riberas and Habul were out on the spot.

The fourth yellow flew when TeamTGM’s Owen Trinkler slid off-course and could not extricate himself from the grass.

LMP3 saw CORE autosport’s Colin Braun come from the rear of the class to lead at the one-quarter mark.  He was a half-second ahead of Andretti Autosport’s No. 36.  Sean Creech Motorsports was third, then Performance Tech Motorsports.

GTD Pro was led by KCMG’s Dennis Olsen with his No. 2 Porsche.  Olsen had less than a second over the Risi Competizione Ferrari.  Pfaff Motorsports was third with their Porsche, followed by Vasser Sullivan’s No. 14 Lexus.  WeatherTech Racing’s No. 97 Mercedes was fifth.

The Heart of Racing’s second car, the No. 27 Aston Martin with Tom Gamble at the wheel, was leading the GTD class at the six-hour mark.  Gamble had a 1.072-second lead over the HTP Winward Motorsport Mercedes.  The CarBahn Motorsports with Peregrine Racing Lamborghini was third, then TR3 Racing’s No. 19 Lamborghini and Gilbert Korthoff Motorsports’ Mercedes.