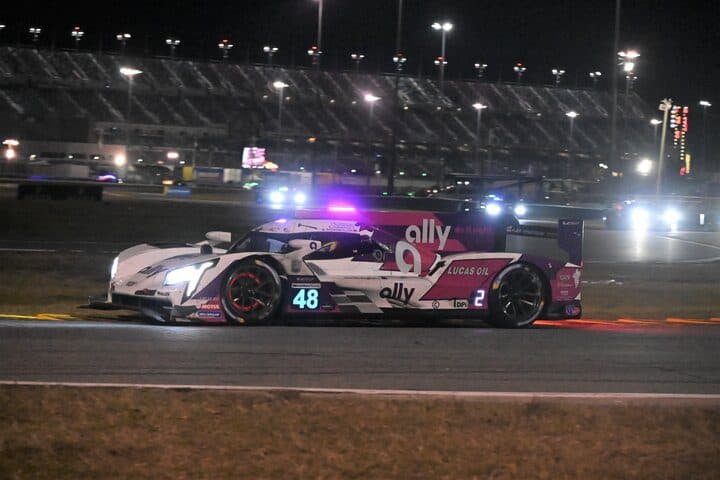 DAYTONA BEACH, Fla. – Wayne Taylor Racing’s Ricky Taylor held the overall lead at the three-quarters mark of the Rolex 24 at Daytona Sunday morning (Jan. 30).  At the 18 hour mark, there were four cars on the lead lap, still fighting hard for every position that they can get.

In recent years, the DPi class could run without too many problems in the first half of the race.  It would be after halfway where the problems would start.  That ended up being the case here as well.

First, the No. 48 Ally Cadillac of Jimmie Johnson suffered a suspension failure after contact with a GTD car.  That pitched Johnson into the grass inside of the International Horseshoe and spun him out.  Johnson then had to limp the car three miles back to the pits.  During that time, Johnson got a flat tire and spun in the Le Mans chicane again.  The team was able to repair the Ally Cadillac, but the team lost 23 laps in the garage before rejoining in 23rd overall.  They have signed moved back up to 13th.

At the end of the 13th hour, T3 Motorsport North America’s Misha Goikhberg stalled on-track to bring out the 12th caution.  During this interruption in racing, Sebastien Bourdais took the Chip Ganassi Racing No. 01 Cadillac behind the wall for what originally seemed like a routine brake change.  It ended up being quite a bit more as the team had to go after the alternator belt, a trickier change that cost the team dozen of laps.  At the 18 hour mark, the No. 01 Cadillac was 40 laps down, way out of the hunt.

Ganassi’s last chance for victory was with the No. 02 Cadillac.  Kevin Magnussen was able to take that car to the overall lead with some aggressive driving.  However, the car had fuel pickup issues that resulted in it cutting off on the tri-oval.  Eventually, the team was forced to take the car to the garage to replace the fuel pump.  They are now 28 laps down in 19th overall.

With three of the strongest Cadillacs running into issues, that allowed the Acuras to come back into position to win.  Meyer Shank Racing with Curb-Agajanian’s No. 60 led a substantial chunk of this quarter of the race, but at the 18-hour mark, it was Taylor who held the overall lead in the No. 10 Acura ARX-05, keeping WTR’s charge for four straight overall victories alive.  Taylor’s lead was 3.949 seconds over Helio Castroneves.  Action Express Racing’s Mike Conway was third, followed by Tristan Vautier.

The LMP2 class was relatively quiet in the deep overnight hours, but Tower Motorsport has continued to show excellent form.  Ferdinand Habsburg has proven to be very hard to beat.  At the 18-hour mark, Habsburg was fifth overall and led by 8.795 seconds over Racing Team Nederland’s Rinus VeeKay.  DragonSpeed’s Devlin DeFrancesco was third, then PR1 Mathiasen Motorsports’ Scott Huffaker was a lap down in fourth.  G-Drive Racing by APR’s Ed Jones was seven laps down in fifth.

The GTD Pro ranks had one of their contenders drop by the wayside when the No. 97 Mercedes with Daniel Juncadella at the wheel began smoking and possibly laying down fluid around 6:30 a.m.  Juncadella went to the garage from the class lead for repairs.  At first, they did a quick fix and sent the car back out with Jules Gounon at the wheel after six laps.  That was short-lived as Gounon took the car back to the garage a lap later.  The car has since been officially retired from the race.

At the 18-hour mark, KCMG’s Laurens Vanthoor was leading in his Porsche by 12.618 seconds over Austin Cindric in the WeatherTech Racing No. 15 Mercedes.  Pfaff Motorsports’ Felipe Nasr was third, then Risi Competitizone’s Daniel Serra.  Vasser Sullivan’s Jack Hawksworth was fifth.

The GTD class saw AF Corse’s Toni Vilander up front in his Ferrari at the 18-hour mark, four laps behind the GTD Pro leaders and sixth of all GT3 cars.  Vilander had a lead of 80.653 seconds over the McLaren of Inception Racing’s Jordan Pepper.  Wright Motorsports’ Richard Lietz was third, then HTP Winward Motorsport’s Philip Ellis and Magnus Racing’s Andy Lally.

Through 18 hours, there were 10 official retirements.  In addition to the aforementioned No. 97 Mercedes, the GTD Pro pole sitting Lamborghini and the Heart of Racing Team’s No. 23 is out.  SunEnergy1 Racing is out after crashing with the No. 23.  The High Class Racing No. 20 is out as well.  In LMP3, the Muehlner Motorsports America No. 6 is out after two crashes.  Finally, seven different GTD teams have been eliminated and an eighth (GMG Racing) is out but hasn’t indicated that they’re done.