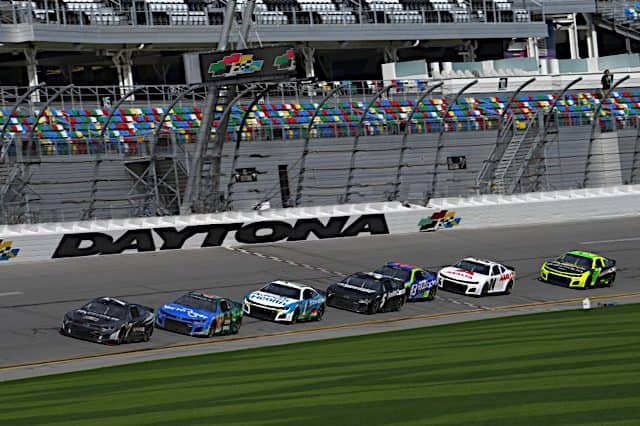 If you have watched football for a short duration, it probably did not take you long to realize that the wristband quarterbacks wear carry a portable playbook. This helps the quarterback have access to plays rather than having to memorize a plethora of them.

Why am I talking about NFL wristbands? Because as a new NASCAR Cup Series season dawns upon us, there are so many changes to memorize, I’d recommend making a wristband to keep track of them.

The time of year pertaining to driver contracts and team situations has famously been coined Silly Season, and like several years in the past, the 2021-2022 Silly Season had no shortage of moves at NASCAR’s top level.

In 2011, Roger Penske moved a young driver named Brad Keselowski from the No. 12 to the No. 2 for Team Penske. The moved proved genius, as Keselowski brought Penske his first Cup title in 2012 behind the wheel of the Blue Deuce. Keselowski drove the No. 2 the past 11 seasons, visiting victory lane 34 times.

Three rookies headline the 2022 Cup rookie class, with Keselowski’s replacement being one of them: Austin Cindric. Cindric came 5 ft. from winning back-to-back NASCAR Xfinity Series titles in 2021, and he made six starts in the Cup Series, too. After originally being announced in the No. 21 for Penske satellite Wood Brothers Racing, the young driver will take the reins of the No. 2 machine.

Filling the No. 21’s seat is Harrison Burton, who comes over after two solid Xfinity seasons at Joe Gibbs Racing. The son of Jeff Burton will look to earn the legendary Wood Brothers their 100th win in the Cup Series.

Two of the three new Cup teams that arrived in 2021 are set to both field two cars in 2022. Trackhouse Racing Team entered the No. 99 for Daniel Suarez last season. It also delivered a bombshell to Silly Season by purchasing all NASCAR assets from Chip Ganassi Racing, allowing it to acquire a second charter, which will be used to field the No. 1 for Ross Chastain, who drove the No. 42 for CGR in 2021.

23XI Racing joined Trackhouse in expanding by signing veteran Kurt Busch. Busch brings back the No. 45 for the first time since 2008, with primary sponsorship from longstanding partner Monster Energy. The Las Vegas native has won in a Dodge, Ford and Chevrolet. Now, he joins his younger brother Kyle from Joe Gibbs Racing in a Toyota for the first time. The Michael Jordan/Denny Hamlin-owned team debuted in 2021 with Bubba Wallace, winning at Talladega Superspeedway.

A second charter for 23XI was acquired from StarCom Racing for $13.5 million, believed to be the highest a charter has sold for since the system was implemented in 2016. StarCom confirmed it would shut down following the 2021 season. However, it recently tweeted a photo with the words “Coming Soon.”

After running a partial Cup schedule in 2021, Kaulig Racing will field two full-time cars in 2022. Justin Haley brings the No. 31 Chevrolet back to the track, a number that hasn’t been on track since Tyler Reddick ran it in two races in 2019. The other car will see a rotation of drivers in the No. 16 between AJ Allmendinger, Noah Gragson and Daniel Hemric. All three drivers qualified for the Xfinity Championship 4 in 2021, with Hemric winning the title at Phoenix Raceway.

Thirteen years ago, Petty Enterprises merged with Gillett Evernham Motorsports, leading to the organization being renamed Richard Petty Motorsports, owned by seven-time Cup champion Richard Petty. Now, RPM has merged with GMS Racing, which will be operating its first Cup team in addition to its Truck team. The team was renamed Petty GMS Motorsports, with majority interest of RPM sold to GMS owner Maury Gallagher. Petty will serve as chairman of the team.

GMS had originally announced its own Cup team, with Ty Dillon signed to drive the No. 94. Thanks to the coalition with RPM, Dillon will instead pilot Lee Petty’s iconic No. 42, while Erik Jones remains in the No. 43. It’s the first time in 39 years that the No. 42 is back under the Petty banner.

Ryan Preece will drive Rick Ware Racing’s No. 15 in multiple races after JTG Daugherty Racing downsized to one car, with Ricky Stenhouse Jr. remaining in the No. 47. Preece was also signed by Stewart-Haas Racing as a reserve driver for 2022 and is expected to compete in three Xfinity races, along with seven Truck races with David Gilliland Racing.

The move by the Berlin, Conn., native may prove to be brilliant, as one of the biggest Silly Season dominoes to fall came in January and will certainly carry over into the 2022-2023 silly season. After 14 seasons in the Cup Series, Aric Almirola will retire from full-time racing following 2022. The 37-year-old has won three races at NASCAR’s premier level and has made four straight playoff appearances. While it is way too early to set anything in stone, especially with the sponsorship market, Preece has to be the the favorite to inherit the seat.

RWR announced in October it will begin an alliance with SHR in 2022. Cody Ware will return to the No. 51 full-time. The team also fielded the Nos. 52 and 53 in 2021, but neither ride is expected to return. The No. 15 will feature a rotation of drivers along with Preece, including two-time Cup winner David Ragan and Joey Hand. Josh Bilicki, who competed full time with RWR in 2021, will move over to Spire Motorsports’ No. 77 in a majority of races.

While Kaulig and GMS come to Cup for inaugural full-time seasons, a new part-time team also joins the circuit. Team Hezeberg, powered by Reaume Brothers Racing, will run a partial schedule with the No. 27, with two-time NASCAR Whelen Euro Series champion Loris Hezemans and former Formula 1 and Indianapolis 500 champion Jacques Villenueve, who last ran a Cup race in 2013.

After driving for Roush the past three seasons, Newman is being replaced by Keselowski. The 44-year-old has not announced any retirement plans, nor does it appear he is ready to do so. At the time of the Keselowski announcement, RFK Racing president Steve Newmark remarked that the team had offered Newman a part-time role with the team. No further indications have been made if that is still a possibility.

Another intriguing note is that of the long-speculated debut of The Money Team, affiliated with former boxer Floyd Mayweather. According to the Sports Business Journal’s Adam Stern, the team has a sponsor, car and driver in Kaz Grala to potentially make their debut at the 2022 Daytona 500.

An additional organization, NY Racing Team, is rumored to be returning to the series in 2022, with Greg Biffle listed as a possible driver for the No. 44.

And on the MBM Motorsports side, the No. 66 will again be driven by Timmy Hill at Daytona, with a potential second entry, the No. 13, for JJ Yeley. The team also has a potential schedule for Boris Said in the No. 66, pending sponsorship.

What is known about the status of the final RWR charter? Has it been sold to Spire yet? Is there a bidding war with The Money Team? That seems like the makings of a story for someone willing to look for information outside of Jayski’s.

Here are where the RWR charters went:

I also saw from either Bob or another Twitter account that The Money Team had acquired the next gen car that Kaz Grala tested for Starcom. So even if TMT got the RWR charter, they would be less competitive than Live Fast (i.e not fast enough for them to plan to run the full season.)

Woohoo…. January is over!!
The 24 hour Daytona race is over, looks like it’s time for the NASCAR season to start. Woohoo!!
There, my excitement for the 2022 season has peaked. LOL

Seriously, good article to get everyone up to speed. Looking forward to the new season and the end of winter.

I think they should start the year with Saturday and Sunday Cup race double-headers at Bristol and Martinsville. 4 races, and double the points for all 4 to add a little more pressure! Get everyone good and mad at each other in the first two race weekends of the year. It would create dramatic storylines to follow for the rest of the season! lol

LOL… and we fans could vote one driver out each week until only one driver was left and he’d be the champion.
36 charters, 36 drivers, 36 races… how dramatic!!!!