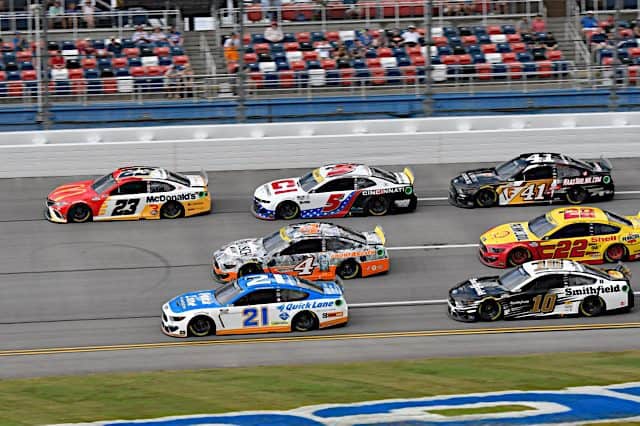 It’s February, which means the NASCAR Cup Series takes to the track to start the 2022 season this month at Daytona International Speedway.

With a wide array of driver and team changes from Silly Season alongside more minor personnel tweaks — or even a few lineups that stayed exactly the same — there’s a lot to discuss as the series moves into the first year of the Next Gen car era.

For 2022, the Frontstretch staff each sent a 30-driver ranking, taking into account each driver’s 2021 season as well as their outlook for 2022.

After spending 2021 as a journeyman driver across NASCAR’s three national divisions, Ty Dillon rejoins the ranks of the NASCAR Cup Series as a full-time driver with Petty GMS Motorsports. From 2017 to 2020, Dillon commanded Germain Racing’s lone entry in 144 races. Despite earning just two top fives and six top 10s, Petty GMS can count on Dillon to finish races and bring his car home; during his tenure at Germain, he failed to finish only 11 times, and in 2019, he finished all 36 races.

The biggest hindrance to Dillon at Germain was the quality of the cars. 2022 brings a new chapter to the Cup Series with a new car and process to build them, which promises better competition. Dillon’s plethora of knowledge and experience will prove vital to Petty GMS and teammate Erik Jones. However, a year away from consistent top competition, coupled with driving for a brand-new Cup team – or at least one half of a new team – will likely see the 2011 ARCA Menards Series champion experience an adjustment period.

Why should you keep an eye on Dillon? Daytona International Speedway and Talladega Superspeedway. He is a sleeper pick for a victory at superspeedways. ~ Josh Roller

One could imagine Corey LaJoie’s second season at Spire Motorsports will be an improvement, but it’s not necessarily a given. After all, his sophomore year at Go FAS Racing in 2020 saw his average finish improve a mere .3 positions, plus one less top 10 and one spot lower in points than in 2019.

However, familiarity still may be a boon for LaJoie, coupled with the general optimism teams like Spire have regarding the Next Gen Cup car — not to mention his own comments on the subject. That optimistic outlook can often beget confidence, something that’s probably at an all-time high for the 30-year-old anyway after 164 career Cup starts.

Keep an eye on LaJoie as Cup returns to the superspeedways, and if you see an uptick in results on the other tracks — let’s say more top 20s than top 25s and 30s — in the early part of the season, know that 2022 could be a career year indeed for the driver of the No. 7. ~ Kevin Rutherford

Kaulig Racing has already proved to be a competitive Cup team and it hasn’t even run its first full season yet. After only nine starts in 2021, the fledgling Cup team had already earned its first Cup race win with AJ Allmendinger at the Indianapolis Motor Speedway road course. Meanwhile, Allmendinger’s Kaulig Xfinity Series teammate Justin Haley was fielding Spire’s secondary car in the No. 77, earning two top 10s in 30 starts for the team.

But while Allmendinger may rule the right-handed turns in the Kaulig camp, Haley has proven to be a superspeedway savant in the Xfinity Series. All four of Haley’s Xfinity wins, plus his lone Cup victory, have come on the high-banked, behemoths and it’s where he will strive in 2022.

Don’t expect Haley to be racing for a top five at Darlington or Auto Club Speedway, but with the inclusion of a second Kaulig car driven by a part-time roster of drivers there to push him, don’t be surprised if we see the No. 31 in the lead at Daytona and/or Talladega. ~ Dalton Hopkins

Winning the 2021 Daytona 500 was a dream come true for Michael McDowell. For both the veteran driver and Front Row Motorsports, it was a magical moment that nabbed them a playoff berth.

But while the 16th-place points finish and Daytona 500 win were notable achievements for McDowell and FRM, the real test for them will be getting into the playoffs for the second-straight season. Hypothetically, his best chance of making the playoffs twice in a row will be winning at either a superspeedway or a road course, his two best types of tracks. Not saying it’s impossible, but with the team’s history of not being a frontrunner every week, it’ll be a tall task. ~ Jesse Johnston

After finishing eighth in both of his Xfinity campaigns, Harrison Burton is seeking to earn the 100th win for Wood Brothers Racing. Son of Jeff Burton, Harrison provides the team with youth as it ushers in the Next Gen car.
Burton scored four races and 49 top 10s in 75 Xfinity starts. Burton also finished inside the top 10 at least half the time on all the varying circuits, so he knows how to drive a fast car around many of the Cup tracks.

Nobody’s expecting Burton to win this season, but running inside the top 25 is an attainable goal. Former Wood Brothers driver Matt DiBenedetto finished 18th in last year’s standings. If Burton finishes less than 10 places lower, his rookie campaign would not be far behind DiBenedetto’s performance.

He has quietly grown from the oft-criticized Kyle Busch Motorsports NASCAR Camping World Truck Series driver he was a few years back. Once he finds success, Burton’s marketability will grow rapidly. He might not be an Earnhardt or Petty, but he is young, talented and marketable. Burton should occasionally turn some heads wheeling the No. 21 Ford. ~ Mark Kristl

It was a down 2021 for Stewart-Haas Racing as a whole, but Cole Custer definitely regressed too. 2022 presents the opportunity for a fresh slate of sorts for the 2020 Rookie of the Year, who only scored two top-10 finishes to his seven in 2020 (including his win at Kentucky Speedway).

But it can only go up from here for SHR and Custer. That’s a plus, along with the Next Gen car allowing driver talent to theoretically shine through a little more. Custer clearly can win (see his nine Xfinity checkered flags and seven in 2019 en route to a runner-up finish in the standings).

Now it’s time for him to run consistently up front in Cup with his teammate Kevin Harvick and show SHR it has someone around whom the organization can build. ~ Davey Segal

A 22nd-place finish in the standings isn’t anything that Ricky Stenhouse Jr. and JTG Daugherty Racing are necessarily proud of, but it was their best finish since the two joined forces in 2020.

It’s entirely possible the Next Gen car levels the playing field just enough for JTG to become more competitive and contend for a playoff spot. The obvious events that stand out for Stenhouse are superspeedways at Daytona and Talladega. But with the parts shortage a real concern and Stenhouse’s knack for aggressive driving, will we see him taper it back a bit during Speedwees?

Time will tell for driver No. 47, who’ll also be racing by his lonesome as JTG downsized from two to one full-time car. ~ D.S.

Jones enters his sixth full-time Cup season with new teammate Dillon. It’s likely a welcome change for Jones, who had his statistically worst year in Cup in 2021. For the first time since 2017, he ended the season with no top fives and just six top-10 results, with his last one coming at Martinsville Speedway in the fall. He finished around 20th on average and ended the year 24th in the standings.

Part of it could be because he previously ran for stronger teams in Joe Gibbs Racing and the defunct Furniture Row Racing. With GMS in the fold now and Dave Elenz as his crew chief, Jones could have a better season in 2022.

The Next Gen car could also help close the gap between teams like JGR and Petty GMS, so top 10s and even top fives are not out of the question for this upcoming year. Jones might even take the checkered flag at a superspeedway if he and Dillon don’t crash out right away. ~ Joy Tomlinson

For their first season together, Daniel Suarez and Trackhouse Racing Team were a positive surprise in 2021. Suarez scored the team’s first top five at the Bristol Motor Speedway dirt track, where he led 58 laps in the main event. He even had an outside chance to make the playoffs well into the summer. However, the No. 99 team could not shake a series of mechanical gremlins, especially at the road course races, that cost it a lot of momentum.

This season will be the first time since 2018 that Suarez will compete with the same team for which he raced the previous year. A little more stability will be helpful for Suarez. Meanwhile, Trackhouse expands to a two-car team following its buyout of Chip Ganassi Racing.

The No. 99 team may still encounter some growing pains in 2022, but it feels like Suarez and Trackhouse have a plan in place to keep moving the team forward. If they can avoid the mistakes that popped up last year, Suarez could be right in the middle of a tight race to make the playoffs. ~ Bryan Gable

Chase Briscoe had quite the rough rookie year in 2021. In the first 14 races of the season, he finished 20th or worse before grabbing his first top 10 at Circuit of the Americas. Though he didn’t crash out until Nashville Superspeedway in June, the first-half results were indicative of SHR’s struggles as a whole. However, the Indiana native was able to add two more top 10s in the summer, both at road courses.

The highlight of the year was when he battled Denny Hamlin for the lead at the Indianapolis Motor Speedway road course in the last two laps. Unfortunately, he cut across the grass, bypassed turn 2 and failed to stop to serve his penalty. As a result, NASCAR parked him and Briscoe finished 26th, though not before he bumped Hamlin out of the way.

The Next Gen car may prove to be a breath of fresh air for Briscoe and the entire SHR organization. If the No. 14 team is able to get solid finishes early on in the year, Briscoe might just contend for victories in his sophomore season, especially on road courses. ~ J.T.

Check back tomorrow (Feb. 3) for the second installment in Frontstretch’s 2022 preseason power rankings, this time Nos. 20-11.

Uh, Jones can run circles around Dillon. Sleeper in the 500, only if you watch him for ten minutes.

McDowell needs to be higher. Remove the 500, and he still had a career year across the board last year.