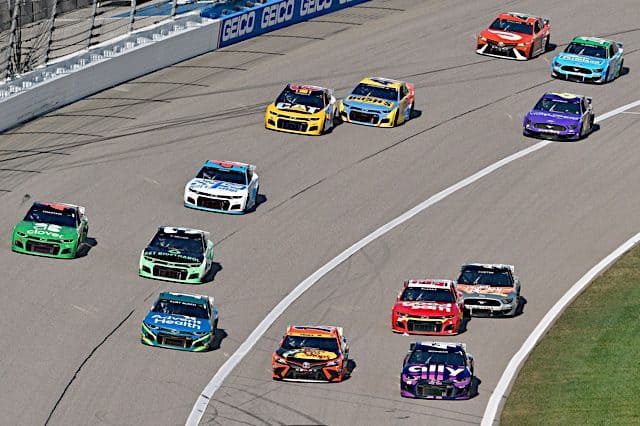 It’s the final day of Frontstretch‘s 2022 NASCAR Preseason Power Rankings, where we’re counting down the top 30 NASCAR Cup Series drivers before the cars hit Daytona International Speedway this month, as voted on by the Frontstretch staff.

And if you missed parts one and two, catch up here and here.

Alex Bowman didn’t have big shoes to fill heading into the 2021 Cup season. No, they weren’t big — they were massive.  How could a driver in only his fourth year of Cup competition and only two series’ wins ever hope to live up to the expectations of a seven-time series’ champion like Jimmie Johnson?

However, not only did Bowman meet expectations, he also exceeded them — by a lot.

Together with crew chief Greg Ives, Bowman gave the No. 48 a whole four wins throughout the year, doubling his entire career amount and snagging the most for the No. 48 since Johnson’s five-win championship season in 2016.

But intermittent inconsistent runs gave the team a 14th-place points finish, far away from the championship run a four-race winning team deserves. It’s time to fill in those 20th-place finish gaps and catch up to his teammates. If the No. 48 can do that, it’ll be a threat for even the championship. ~ Dalton Hopkins

Joey Logano is now the veteran at Team Penske. But 2021 was his worst season since 2017. He scored his lowest laps led since then, and only won once, at the inaugural Bristol Motor Speedway dirt race. A testament to his veteran consistency, the 31-year-old still finished eighth in the championship standings.

Why, then, should Logano be optimistic he can muster another top 10 season? After that aforementioned 2017 season, he won the Cup title.

The Next Gen car should equalize the competition. With that in mind, Logano’s experience at those courses should help him this season. Beyond that, Logano has 27 career wins. He has only gone winless twice in his career, so it is a safe bet to pencil him in for at least one victory this season. ~ Mark Kristl

2021 was quite the fall from grace for Kevin Harvick and the No. 4 team. After winning nine races in 2020, Harvick recorded a goose egg in the win column for 2021. It didn’t help that Stewart-Haas Racing struggled to find speed all season. The 550-horsepower tracks that were Harvick’s bread and butter in 2020 suddenly turned into the races where his team was out to lunch in 2021.

Despite the disappointment in having his first winless season at SHR and his first since 2009, there is still optimism for Harvick heading into 2022. He still recorded 10 top fives and 24 top 10s in 2021, which is impressive given the challenges that the team faced all year. Harvick also turned it on at the end of the season, finishing in the top 10 in eight of the final 10 races to record a fifth-place points finish.

The No. 4 team’s 2022 season will rely on how well Harvick and SHR are able to adjust to the Next Gen car. If they manage to find something that clicks, watch out. ~ Stephen Stumpf

A reunion with crew chief Rudy Fugle sparked a breakout season for William Byron. Although he only won one race, his consistency improved considerably and he was a more frequent frontrunner. After spending most of the regular season in the top five in overall points, it was a shame that Byron’s title hopes ended in the Round of 12.

Could 2022 be the first time that Byron makes a deep playoff run? He certainly looked like a better driver than ever last season, but Hendrick Motorsports as a whole flattened the competition in 2021. The introduction of the Next Gen car might erase some of Hendrick’s advantage on the rest of the field. On the other hand, Byron showed an ability to dominate in NASCAR’s lower divisions once he got acclimated to his surroundings.

If he and the No. 24 team had caught a few more breaks, especially in the playoffs, he would have hauled in a lot more trophies. Do not be surprised if Byron visits victory lane on several occasions in 2022. ~ Bryan Gable

Ryan Blaney enters his seventh full-time Cup season with new crew chief Jonathan Hassler, as Todd Gordon retired from the position at the end of 2021. Hassler first stood atop Matt DiBenedetto’s No. 21 pit box at Martinsville Speedway in April and returned in June to finish out the rest of the year. Though it was his first time in this role, he led DiBenedetto to six top 10s in the final 20 races.

Blaney, meanwhile, had his strongest year to date, earning three wins, 11 top fives and 20 top 10s. Two of those victories came in the final two events of the regular season. He finished around 12th on average — his best yet in Cup — and ended the season seventh in the standings.

However, the 28-year-old didn’t snag a win in the playoffs, and a crash at Kansas Speedway left him in a deep hole heading into Martinsville, one out of which he couldn’t quite crawl. If he’s able to sneak in a victory or two and grab stage wins and good finishes in the last 10 races of the season, he’ll be able to contend for a championship.

Look for him to take his No. 12 Ford Mustang to victory lane three more times and earn a spot in the Championship 4. ~ Joy Tomlinson

For most drivers, a season featuring two wins, 22 top 10s and an average finish just below 10th might be a career-best effort.

For Kyle Busch, though, it was another down season after his one-win 2020 performance 2020, which followed five straight years of at least four wins each and two titles bookending that span. Busch also failed to lead more than 1,000 laps after four seasons of doing so, finishing ninth in points.

Things started strong for Busch and new crew chief Ben Beshore, taking advantage of a final-corner spin in the Busch Clash to win the season opener. Busch didn’t lead a regular-season lap until the Bristol dirt race, though, while it took him until May to win; his first victory of 2021 came on his birthday at Kansas, and the No. 18’s only other visit to victory lane came on fuel mileage at Pocono Raceway.

Busch has shown a quickness to adapt to new cars, becoming the first driver to win in the Car of Tomorrow in 2007. Conversely, he did recently go for a spin in the Next Gen test at Phoenix Raceway, so the No. 18 team has some work to do as the season approaches. ~ Adam Cheek

Chase Elliott comes off a subpar 2021 (by his standards), visiting victory lane twice. With no oval victories, the 2020 champion is poised to claim just as many if not more checkered flags, and add an oval back to his repertoire along with right and left turns.

With the Next Gen car as an obvious unknown, it’ll be nothing new for Elliott. This is the same driver who has willingly pushed himself out of his comfort zone racing midgets on dirt (and flipping doing so) and has adjusted better than fine, according to his peers. ~ Davey Segal

After a disappointing 2020 season brought a host of questions to Martin Truex Jr. and the Cole Pearn-less No. 19 team, Truex silenced all the doubters in 2021.

He was red hot to start the season, as he picked up three wins in the first 12 races and added a fourth at Richmond Raceway in September. In the finale at Phoenix, Truex looked poised to win his second championship until a late caution put Kyle Larson in the lead, and Truex was forced to settle for second after he was unable to catch Larson in the closing laps.

Truex was feast or famine throughout 2021, as there were several stretches in the summer where he wasn’t in winning contention. But when he was on, he looked like one of the best drivers in the sport.

Truex and second-year crew chief James Small have continued to improve the No. 19 team since their start in 2020, and it isn’t hard to imagine that they will be back in championship contention for 2022. ~ S.S.

You’d be forgiven if you assumed Denny Hamlin won more than two races in 2021. More than 1,500 laps led, 25 top-10 finishes and an average finish around eighth were all career bests for the longtime Joe Gibbs Racing driver, following seasons of six and seven wins in 2019 and 2020, respectively. Hamlin also finished each of the 36 Cup races in 2021, not recording a DNF all season long.

The Chesterfield, Va., native didn’t visit victory lane until the opening race of the postseason, though, despite nearly winning the regular-season championship. He claimed the points lead after the second race of 2021 and didn’t relinquish it until after race 23 at Watkins Glen International, locked in a points battle with Larson for the majority of the regular season. Hamlin finished in the top 10 in eight of the 10 playoff races but failed to lead a lap in the finale at Phoenix and missed out on the title, his third close-but-no-cigar result in as many years.

Now 41 years old, Hamlin returns with JGR for another season and the fourth generation of car during his career. He’s still chasing that elusive title. ~ A.C.

After Hendrick Motorsports signed Larson for 2021 in the wake of his Chip Ganassi Racing firing and NASCAR suspension, the longtime No. 42 pilot got to work early and often.

The driver of the No. 5 recorded 10 wins, 20 top-five finishes, 26 top 10s, more than 2,500 laps led and an average finish of 9.1, earning the regular-season title and his first season championship in the process. He was at the forefront of a bounce-back season for HMS as a stable, recording 17 wins overall — more than half the schedule.

Larson suffered just two DNFs all season, recording four straight top 10s to start the postseason before ending up 37th at Talladega Superspeedway. The No. 5 then reeled off three straight victories, his second such streak of the year, and despite finishing 14th at Martinsville had all the momentum as the tour headed to Phoenix for the finale. After some competition and losing the lead late, Larson retook control and secured the 2021 series crown.

The defending champ faces a new challenge in 2022 with a new generation of car, the first time that NASCAR has executed such an overhaul during his tenure in the Cup Series. ~ A.C.

Hard to argue about the top ten. Clearly Larson gets the nod on his last 18 months in all formats. Elliot Hamlin Busch and Truex all pretty equal. Hendricks dominance may wain with new spec chassis

Completely new ball game for every team and real racers. The guys who are the real deal will figure out the car, the drivers will be all over the place. I think you need to consider Kurt Busch and maybe even Brad into these top 12 say. They are both smart thinkers and wheelmen and even though their teams aren’t top notch, this car is totally unknown. I like to enjoy the real racers, and I have to tell you I’m excited to see how Kurt does even though I don’t think much of the team he drives for.