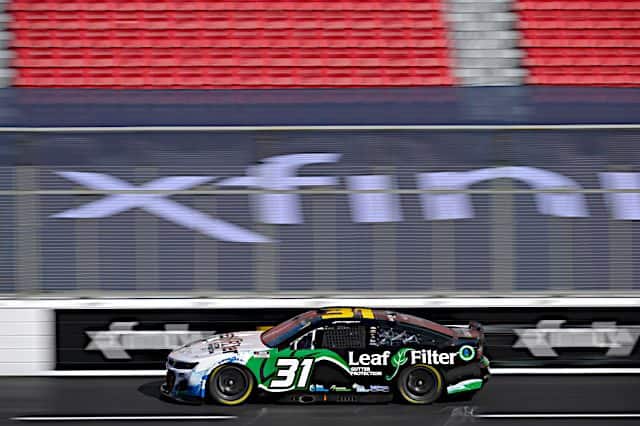 But that was nowhere near indicative of his race and overall weekend.

Haley, who posted the third quickest time in qualifying Saturday night and won his heat leading flag-to-flag, was a solid top-five contender during the main event. He looked to be a dark horse contender for victory until contact sent the No. 31 Kaulig Racing Chevrolet careening into the infield barriers on lap 116, ending his day.

The contact came courtesy of the No. 5 Chevrolet driven by Kyle Larson. His move was a bit uncharacteristic for the defending NASCAR Cup Series champion, but Haley told Frontstretch he and Larson talked things out and were “all good” following the race.

“I just talked to Larson actually,” Haley said. “(Larson) said he lost his cool for a second. I was obviously getting a lot of help from behind when I hit the No. 5, so it’s all good. It’s just a restart. I just got low and the No. 24 (William Byron) jacked me up and hit me into the No. 5. I was on the brakes as hard as I could, and then Larson said he just lost his cool and cut down on me.

“So it’s all good. I talked to him. We’re all good and will move on, it doesn’t really matter here. It was already a win coming in how we showed so much speed, so we’ll be OK.”

Team president Chris Rice echoed his driver’s sentiments. With the race being an exhibition and the finish not mattering in the grand scheme of things, the competition knowing Kaulig was there and a force to be reckoned with was the biggest takeaway.

“Just to show the growth of Justin Haley over the full weekend is what what the win was,” Rice told Frontstretch. “Our race team is amazing. We got a lot of things to work on and got a lot of ways we’re gonna improve, but it’s a long season and to start it off where and how we started off is really cool. So very proud of Justin Haley, very proud of the whole Kaulig Racing group. We gotta go to work.”

In 2015, Haley started second and finished third at Bowman Gray Stadium in a then K&N Pro Series East event. But the 22-year-old was quick to dispel that experience having any impact on how he ran at the Coliseum.

“That was way too many years ago. I can’t even remember what happened last week,” he said with a chuckle. “This race is like the great equalizer, kind of like a rain race. I mean, the outcome obviously wasn’t what we wanted. We had a fast race car. That’s all that really matters.”

Even Rice was a bit surprised at the No. 31’s speed from the get-go, posting quicker lap times than drivers at Team Penske, Joe Gibbs Racing and Hendrick Motorsports.

“I think everybody was [a bit surprised],” Rice said. “They’ve seen [Haley] drive around and not be at the top of the board or anything like that. But you look at his season last year, and he ran inside the top 10 24 times. And that was what was cool… to come down to the end and be racing with the champion, that’s fun.”

We proved that we belong, and that means more to me than anything. Unreal weekend from @LeafFilter & @KauligRacing.

“I said on the radio before the race, ‘no matter how we end, this was a huge win’,” Haley added. “I thought we were just going to be on the cusp of just making the show, right? We obviously were a contender for the win. So the cards didn’t play out our way this time, but that can change any race.”
You could see Rice’s face cringe a bit when the beaten and battered No. 31 car rolled back into the garage area on a wrecker. Due to ongoing supply chain issues, losing any parts or pieces of a Next Gen car can be a significant setback for an organization, moreover a new one to Cup competition.
“Inventory issues are a bad deal. But you know, hey, it’s racing. It’s Bowman Gray style, you know,” Rice said. “It’s a long season, I always say that you smile at your competitors in this long season. And you just have to pay attention to who you race and how you race them…
“This momentum is good for our Xfinity team, it’s good for our Cup team. It’s a lot that you can carry on when you come out here and run as solid as we ran. We outran Kyle Busch all day. AJ (Allmendinger) got better and better with the No. 16 car, so yes, you can take this momentum. Our crew chiefs are amazing. And our engineers are amazing. And we’re not done. That’s it. We’re just getting started.”

I’ve always like Kyle Larson but have lost some respect for him after the dirty driving with Justin Haley. If Larson looks at the video, he might see that Haley had someone behind him pushing him forward into Larson.