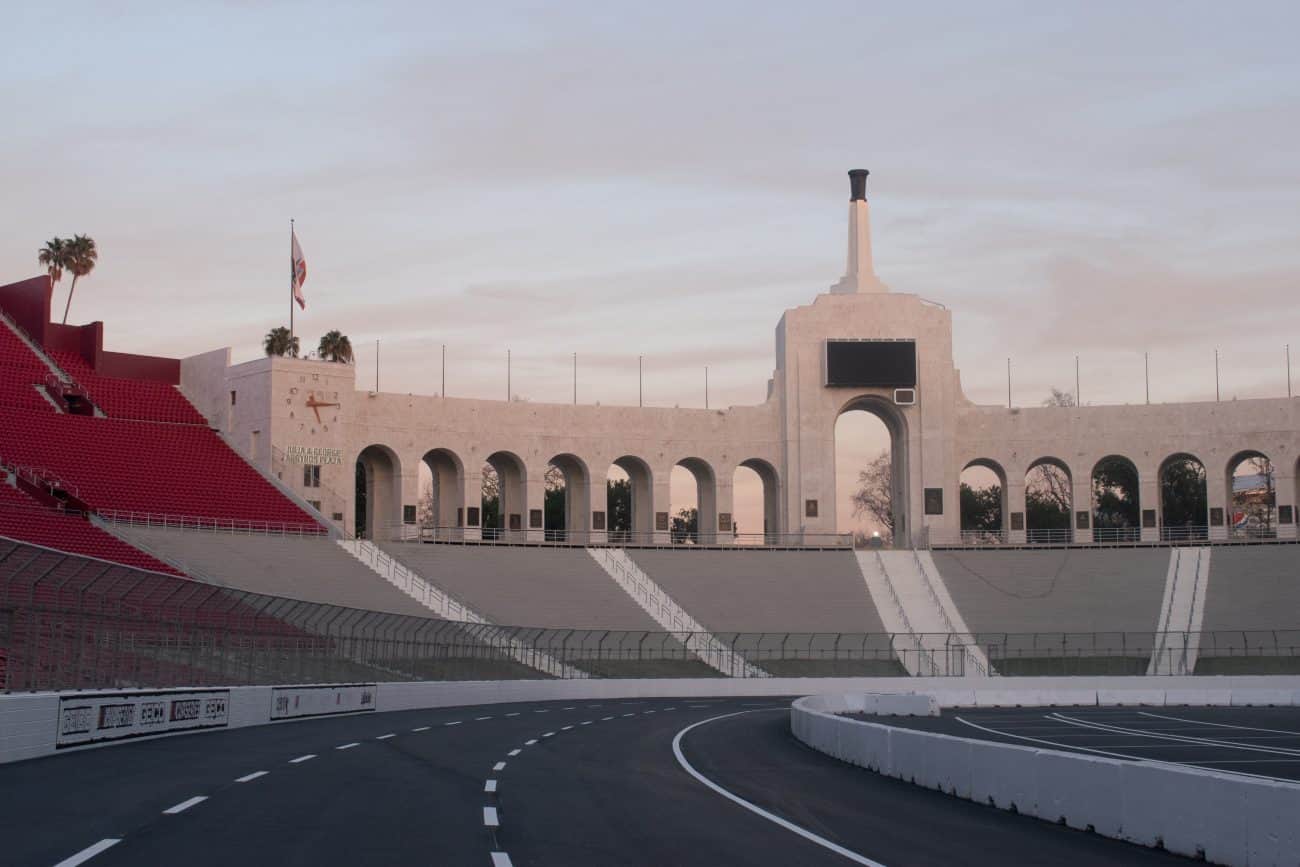 Finally, the NASCAR season is once again upon us! Up first is the 2022 Busch Light Clash, so let’s get your daily fantasy NASCAR DraftKings rosters ready for Sunday’s (Feb. 6) main event, airing at 6 p.m. ET on FOX.

For the first time ever, the Clash will be held at the Los Angeles Memorial Coliseum, a historical football stadium where the University of Southern California Trojans play. NASCAR laid down asphalt on top of the grass and set up a catchfence, surrounding a quarter-mile racetrack. It’s so small that the main pit area is outside the stadium.

This is also the debut of the Next Gen NASCAR Cup Series cars. What better place to see the cars in action than at a short track, right? Well, since it is the first race, I think some drivers will be more apt to conserve their vehicles than to beat and bang for the race win. Teams don’t have a full fleet in their hands yet, so they likely will just race for the win if they do well in the heats. Then again, there are drivers who just want the victory no matter what and would love to be the first Clash winner at the famed venue.

So how should you approach this event for daily fantasy? In short, very carefully. All kidding aside, you’ll likely need to pay attention to who qualifies well for the heat races (as the first four take the poles in each heat) as well as which drivers move on to the main event. The winner of heat one will be on the pole for the main, while heat two’s victor takes the outside pole. Drivers who take heats three and four lineup in row two, and so on.

The top four in each heat move on to the feature race, while the rest tackle two separate last chance qualifiers. The podium finishers of each LCQ make the main; the last spot is reserved for whoever finished highest in points in 2021 from those who didn’t qualify. Twenty-three total cars will run in the 150-lap feature race.

The video below tells the gist of the format.

The format for the Clash at the Coliseum on FOX. #RaceHub pic.twitter.com/LWzuwxNsb1

Heats will start at about 3 p.m. ET and air on FOX.

As far as scoring, DraftKings will only count what happens in the main event, so you can change your rosters if one of your drivers doesn’t make the race. The rules are the same as last season: 0.45 for each fastest lap and 0.25 for each lap led. Additionally, drivers can earn a point for each position they gain on the track (relative to where they start). They can also lose a point for each spot lost, so keep this in mind if you decide to play the polesitter.

DraftKings Picks for the 2022 Busch Light Clash at the Coliseum

The stats above count only Martinsville, Richmond and Bristol, but we can look at the other 1-mile tracks as well, especially Phoenix Raceway and New Hampshire Motor Speedway. Speaking of Phoenix, Larson secured his championship there last year after his pit crew helped him get in the lead at the end of the race. He also led 107 laps en route to victory.

That said, the track at the LA Coliseum is much shorter than Phoenix and is shaped somewhat like a paperclip; in other words, it’s a fairly unique course.

Still, Larson’s dominant 2021 season makes him the favorite coming in to this weekend. For example, at Bristol he led 175 laps and won after his Hendrick Motorsports teammate, Chase Elliott, blocked Kevin Harvick and allowed Larson to get by.

Then at Dover, Larson led over half the race before ultimately coming home second. I’m sure he wouldn’t mind adding a Clash win to his resume.

Hamlin has many victories at 1-mile or less tracks but not within the last 10 events. However, he does have six top fives in that span. Last fall at Martinsville he was on his way to the win but was moved out of the way by Alex Bowman. He ended way back in 24th after leading 103 circuits and showed his displeasure with Bowman after the race.

The No. 11 Joe Gibbs Racing pilot also was out front for 197 laps at Richmond last fall and 207 laps in the spring; Hamlin finished runner-up in both events. His experience and dominance at these short tracks could help him get the win on Sunday.

Blaney was on my mind this week as I thought about this upcoming race. He could be a sneaky DraftKings play for the Clash, as he crossed the line fourth after leading 33 laps in the 2021 season finale. Then in the spring, Blaney led 35 circuits en route to 10th place.

Plus, you may have noticed a little tidbit in the news section on DraftKings. Blaney held the fastest lap time at Phoenix on the second day of the Next Gen test there last week. While it was just a test, it could be an indication that Blaney has adapted well to the car, making him a prime contender for the win Sunday.

As previously mentioned, Bowman snuck in a win at Martinsville after he bumped Hamlin, causing him to spin in the closing laps. This is partly why I’m picking Bowman on DraftKings — his aggressiveness and competitive nature could come in handy at an exhibition race like the Clash.

He also won at Dover after leading 98 laps. In three of the four Dover races prior to that, Bowman earned top-five finishes. Plus at Martinsville in 2020 he ended in sixth in both the spring and fall events.

Keep track of Bowman’s speed this weekend. If it’s strong, he could run up front and score the win.

I actually wanted Allmendinger to be my dark horse, as he’s driving for Kaulig Racing. This may not be the best equipment, so you’ll need to pay attention to the heat races to see if he qualifies for the main.

He earned Kaulig’s first Cup win last year at the Indianapolis Motor Speedway road course. However, it wasn’t his first rodeo, as he raced in Cup from 2007-2018, earning a victory at Watkins Glen International for JTG-Daugherty Racing in 2014. His veteran presence could be an asset for this weekend.

Also, Kaulig is trophy hunting and would love to snag the victory at the Clash. Like Bowman, Allmendinger was aggressive at Bristol in the Xfinity Series regular season finale. He and Austin Cindric slid coming across the finish line and ended up crashing. This aggressive behavior could appear once again, though the team might want to conserve their resources for the regular Cup season.

I chose Almirola because he finished sixth in the final two races at Martinsville and Phoenix last year, adding on 14 fastest laps in each. This produced over 50 fantasy points on DraftKings for each race- his best score since his win at New Hampshire Motor Speedway. He also was sixth at Richmond in the spring.

This will be the final full-time Cup season for the No. 10 Stewart-Haas Racing driver, so starting off the year with a win would be great. Even if he doesn’t, though, Almirola could carry the momentum from last year into this season and earn a good finish.