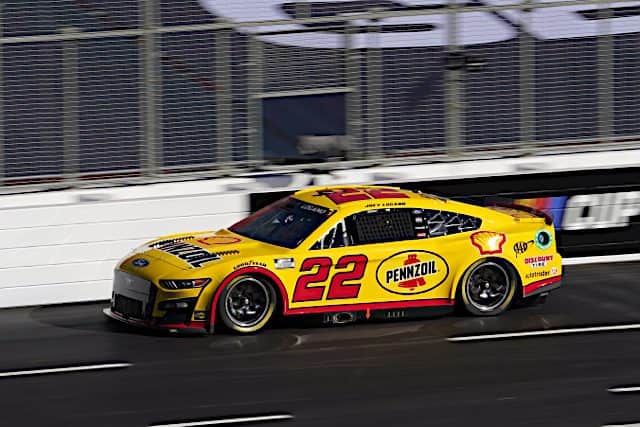 Joey Logano won the first Busch Light Clash at the Los Angeles Coliseum Sunday (Feb. 6). In doing so, he captured the first race in the NASCAR Cup Series’ Next Gen car and became the first repeat winner of the season-opening event in the past six years.

After a few calm heat races and chaos eventually abounding in the last chance qualifiers, 23 cars transferred into the main event. Denny Hamlin won the opening last chance qualifier while everything hit the fan in the second. Wreck after wreck and caution after caution plagued the 50-lap length, while Ty Dillon eventually emerged the winner … but was disqualified due to jumping the final restart. As such, Ryan Preece inherited the win and Harrison Burton earned the extra spot.

Heat winners Kyle Busch, Tyler Reddick, Justin Haley and Logano rolled off first through fourth, respectively, while Martin Truex Jr. elected to take the provisional transfer spot via being the highest driver in 2021 points not to make it into the 150-lap feature.

Busch and Reddick helmed the start of the race, the No. 18 leading a couple of laps before Reddick took control. Cars began getting lapped just 20 circuits into the main event, with the traffic helping Reddick hold Busch at bay but allowing Logano to get within striking distance.

Hamlin and Ricky Stenhouse Jr. became the first victims of the main event, Stenhouse spinning near the lap 50 mark and Hamlin suffering a power steering failure.

Before the green flag flew after the Stenhouse spin, both Reddick and Chase Briscoe were forced off track due to trans-axles failing. In all, four drivers suffered mechanical DNFs in the first race running the sport’s new chassis.

Elliott was the next casualty of a mid-race incident, looping his No. 9 in the corner by himself. NASCAR’s Most Popular Driver was never a factor and finished the race outside the top 10.

Out front, Logano and Busch waged a battle for the lead during the lead-up to the mid-race break, with the No. 22 scooting slightly ahead of the No. 18 at the caution.

Once the halftime concert, courtesy of Ice Cube had concluded, Busch took off with the lead while Logano and Byron battled behind him. Logano closed in but his march was halted by a caution for Team Penske stablemate Ryan Blaney, who rolled slowly into the infield after contact. A frustrated Blaney chucked his HANS device at Erik Jones‘ No. 43, the apparent cause of the incident.

A closer look at what happened on the track. 👇 pic.twitter.com/58NArpdmQs

The other primary incident came after contact between Kyle Larson and Justin Haley, where an errant block from the No. 5 sent the No. 31 hard into the inside wall. The hit destroyed Haley’s left front wheel, ending his bid at a win after running inside the top five.

This is how @Justin_Haley_'s day came to an early end. pic.twitter.com/ZdT1QL8xkB

Everything settled down until Kyle Busch closed in on Logano with mere laps remaining. But the old rivalry didn’t rear its head as Busch was unable to close to the No. 22’s rear bumper. Successfully fighting lapped traffic, Logano held on for the victory and promptly did a burnout in front of over 50,000 screaming fans.

“I can’t believe it, we’re here,” Logano told FOX Sports. “L.A. Coliseum, we got the victory with the ol’ Shell-Pennzoil Mustang. This is an amazing event, congratulations [to] NASCAR. Such a huge step in our industry to be able to do this, put on an amazing race for everybody. I’m out of breath, I was so excited about this one. It’s a big win. My wife’s having a baby tomorrow, our third one, so pretty big weekend for us.”

For Logano, it capped off an amazing turnaround after an awkward start to the weekend.

” […] The guys working on the car did an amazing job,” Logano added. “We were 28th or so on the board yesterday. Made some good changes.”

And now, Logano travels back with the trophy to celebrate another big moment: the couple’s third child will be born this week.

“I’m headed home right after this,” he said. “I told her, ‘if you’re having the baby, I’m just running right off the track from here.’ I don’t think it’s happening right now, but this is special to get the first Next Gen win, to get the first win out here in the Coliseum, it’s a special one so we’re gonna have some fun and celebrate it.”

Cup Series teams now have two weeks to prepare for the Daytona 500, which will be held on Sunday, Feb. 20 with coverage beginning at 2:30 p.m. ET. Prior to the Great American Race, the two Bluegreen Vacations Duels will run on Thursday, Feb. 17 starting at 7 and 9 p.m. ET, respectively.

I hate that Reddick and Briscoe broke transaxles. Both seemed to be good enough to contend for the win.

Bill B
Reply to  JD in NC

I wouldn’t say I am a fan but I’ve been waiting for Reddick to break through. He’s impressed me on more than a few occasions.

The one hopeful takeaway IMO, is that maybe attrition from mechanical issues will be an issue this year. I don’t have a problem with that as it makes those 400 and 500 races more suspenseful if you have to worry about parts lasting. May make drivers have to take care of their car more in the early stages.

I’ve been waiting on Reddick also. I know he can run circles around Dillon, maybe just a tad more experience will do it. At least Ty Dillon lived up to my expectations, he doesn’t belong .

trying to figure out how Ty Dillon was dq’ed for jumping the final restart in the LCQ. He was the control car and if the car on the outside was caught sleeping, well, too bad.

Bill B
Reply to  Kicks

Who cares. He drove like an idiot the entire time so he deserved to be parked.