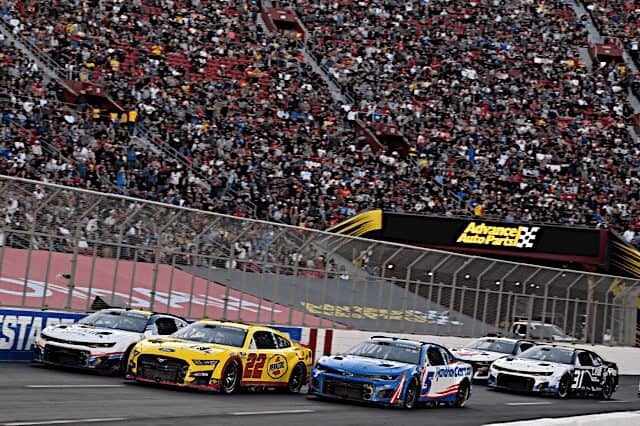 LOS ANGELES — From the very start, NASCAR knew trying to race inside the Los Angeles Memorial Coliseum was a gamble.

The risk was worth it and NASCAR hit the jackpot.

The 2022 Busch Light Clash at the Coliseum was an undeniable success. Inside the confines of a football stadium sat over 50,000 spectators, 70% of which were reportedly first-time NASCAR attendees. And by the time Joey Logano found himself celebrating with donuts at the start/finish line — 75 laps after an Ice Cube performance in front of the iconic peristyle — none of those fans were sitting down.

The energy was palpable all weekend, but never more so than when it came time for Sunday’s feature event. To see the Coliseum filled with fans was nothing short of electric.

Credit for the first-in-a-lifetime production must go to FOX Sports, which played a significant role in making this event, well, an event.

What truly convinced me that the Clash was an unmitigated success, though, was the fact that my girlfriend was texting me about the race as it was happening.

For background, she is a native of Southern California, growing up some 70 miles southeast of the coliseum, and has never willingly turned on a NASCAR race in her life. She joined me as a spectator at Dover Motor Speedway back in 2015 and enjoyed the experience very much, but that never evolved into her seeking out the sport on her own.

That changed Sunday (Feb. 6) when she voluntarily tuned into the Clash from home across the country, deciding to see what all my excitement was about.

First came astonishment — the number of people packing the stands, the absurdity of the setting right smack in the middle of L.A. Then came the same thing diehard fans have been saying for years.

“They need more short tracks in the series. This is so fun,” she texted. “Tight, compact, competitive.”

She’s aware of all the different tracks on the circuit and how strung out things can get, but I don’t think we’ve ever had a conversation regarding the “more short tracks” push across NASCAR. Turns out we didn’t need one.

And while long-time fans had their issues with FOX’s broadcast — complaints of too-tight camera angles and too many in-car camera shots opposed to the racing peppered social media feeds — this first-time viewer found Mike Joy, Clint Bowyer and Tony Stewart genuinely funny.

Some basic questions came up, like the difference between inside and outside, noting how well some drivers were doing and unfortunate circumstances of others.

Ice Cube’s performance was clearly the peak of the event for her. I could tell from her text: “YOU’RE LIVING MY BEST LIFE.”

Ice Cube really just performed in the middle of a Nascar race 🔥🔥pic.twitter.com/Kc10VsyFFv

Then it was back to the racing — how quickly it goes by; feeling bad for Ryan Blaney,then laughing at him throwing his HANS device at Erik Jones; being mad at Kyle Larson for hip-checking Justin Haley hard into the frontstretch wall.

As the race wound down, she pulled for Logano over Kyle Busch and got her wish when Logano took the checkered flag. His post-race burnout sealed the deal for her: “SO COOL. God he ate THAT [expletive] UP.”

I couldn’t believe my eyes. Not only had I just watched a race inside the Los Angeles Memorial Coliseum, but my doesn’t-give-a-damn-about-racing girlfriend was happily, willingly watching a race on her own volition and legitimately enjoyed it.

It was the ultimate proof that NASCAR hit a grand slam with this event. When is the last time anybody — even diehard fans — cared about the Clash? Suddenly, even the casual fan wanted to tune into this race.

So that begs the question: How does NASCAR capitalize on this?

If there’s anything we’ve learned over the years, it’s that when NASCAR strikes gold, it has shown tendencies to overdo it — the most key example these days being road courses.

But NASCAR has to bottle this energy and carry it forward for at least the next three weeks.

See also
The Big 6: Questions Answered After the 2022 Busch Light Clash at the Coliseum

This is an entirely new era of stock-car racing. That was already evident because of the Next Gen car in addition to some bolder scheduling moves. But the whirlwind of enthusiasm that surrounded the sport this weekend — on-site and abroad — proves NASCAR carries an enormous amount of momentum into Daytona International Speedway and Auto Club Speedway (back in SoCal on Feb. 27) instead of any overwhelming concern or skepticism regarding the new car.

Back to the question: How does the sport capitalize on it?

It’s a difficult question to answer because so many things are already set in place. Luke Combs will perform in Daytona, which is always a plus. Then Collective Soul will play a pre-race concert in Fontana, which … is an objectively smaller headliner.

My point here is this: NASCAR can’t suddenly call The Weeknd or Doja Cat and expect them to show up to make a race at New Hampshire Motor Speedway feel like an A-list event. But the more mainstream NASCAR becomes, the more the sanctioning body and its television partners can do to make each race feel like a big deal again.

The key to all of this is authenticity.

Taking a risk like this is something NASCAR would never have done even five years ago. Now that its officials have tried it, there have to be more consistent efforts going forward to not only attract the casual viewer, but keep them.

In the words of my girlfriend: “Might catch me watching more.. but prob not.”

It’s now NASCAR’s job to convince that fan to keep coming back.

Sorry, but your girlfriend’s enthusiasm isn’t indicative of the clash being a success or not. It was in the heart of L.A., many tickets cost nothing because Nascar and Fox had to appear successful. We never got close ups of the crowd, but I’d bet a big percentage were there for the pre race and intermission rappers. California has always shown Nascar what they think of their sport. You and your girlfriend may think this was a success, but we really don’t care. We see it for what it truly was.

And the gimmicks and distractions will continue ad nauseum. I’m sure the brain trust at Daytona are planning some more, as in “We need more TV time outs to satisfy the networks. They don’t think there are enough commercials.”

Intermission at half time during a Nascar race wow, for a concert no less. Is Nascar headed for heat races like the dirt racers ! Or are we going to eventually see intermissions like this one ! We know they can see the commercial dollar signs, so there are definitely going to be major changes coming in the near future. I’ll probably switch to watching curling.

Yeah, I agree with you. I didn’t think the whole qualifying heat thing made for a good overall race. In fact, I didn’t like that process at all and if they ever go that route I will also be switching to curling.
I can’t see them going for the long intermission when they already have two short ones in the form of stages. That would just be overkill. I wonder if the NFL has ever considered extending the 1st and 3rd quarter breaks?

They’re showing women’s curling from the Olympics. You’ll like the scenery.