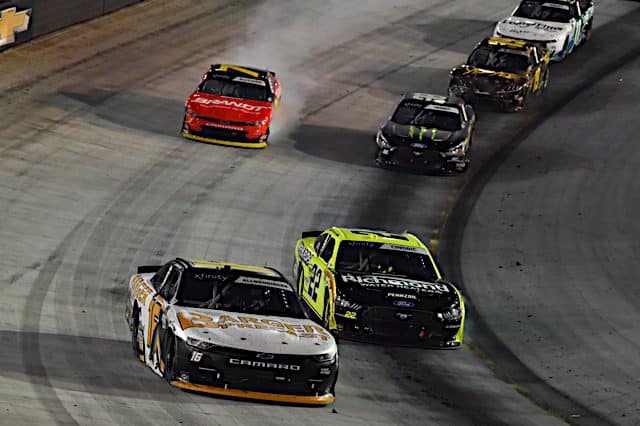 Since 2005, Roger Penske’s team has graced NASCAR’s second-highest division with at the very least a couple of handfuls of starts. But Penske EVP Walt Czarnecki told FOX Sports’ Bob Pockrass last month that the team has no plans to field a car in 2022.

The team made back-to-back trips to the Championship 4 race with Austin Cindric, winning the championship in 2020, making Penske’s absence certainly a loss to the series. But some will see it as an opportunity for a smaller or up-and-coming team to fill the void.

One of those teams is Alpha Prime Racing. Formerly known as Martins Motorsports, the revamped organization is a collaboration between drivers Caesar Bacarella and Tommy Joe Martins. APR expands from one entry when it was Martins to two cars: the Nos. 44 and 45. It will field Chevrolets and has multiple drivers slated to make starts for the team.

Joe Gibbs Racing is another team retracting in 2022. Gibbs is fresh off winning the 2021 driver championship with Daniel Hemric, who has departed the team for Kaulig Racing. The team has also lost Harrison Burton to the NASCAR Cup Series but has retained Brandon Jones, who enters his seventh full-time season in the Xfinity Series and fifth with JGR.

Alongside Jones is expected to be Ty Gibbs, who would run the full calendar of races in 2022, though his move to a full-time role hasn’t yet been officially announced by the team.

Jones and Gibbs will be the only full-time drivers for JGR, with a third car, the No. 18, featuring a variety of competitors, including Trevor Bayne. That’s one car less than 2021, when JGR fielded four.

Brett Moffitt was the team’s solo full-time driver in 2021 and returns again in the No. 02. Our’s second car, often the No. 23, was driven by various drivers last season. But after spending one year in the NASCAR Cup Series, Anthony Alfredo moves to Our’s No. 23 for the full schedule.

The team’s newfound third entry, the No. 27, will be driven by Jeb Burton, who moves from Kaulig, with whom he won his first Xfinity race in the rain-shortened Talladega Superspeedway event in April last year.

For the first time since 2018, Richard Childress Racing will field two full-time drivers.

Creed and Hill are expected to factor heavily into the conversation for the series’ Rookie of the Year honors.

Myatt Snider spent the 2021 season with RCR. But despite a late-season surge in performance, Snider was released from driving duties at RCR — though not from the RCR network. His new home is at the fledgling Jordan Anderson Racing, which has a technical alliance with RCR and had several outstanding performances with various drivers in its premiere Xfinity season in 2021.

With the departure of Penske, Ford will be represented by three full-time driver-team combinations, at least at press time. Riley Herbst returns to Stewart-Haas Racing’s No. 98 group, and Ryan Sieg and RSS Racing remain with Ford in 2022 after joining forces in 2021 for its No. 39.

Both Herbst and Sieg underperformed compared to expectations last season. Herbst stepped into a ride with nine wins and a trip to the Championship 4 race in 2020 with Chase Briscoe but was unable to visit victory lane, and Sieg’s overall performance dropped from his best season in 2020.

They will be joined by Joe Graf Jr. and SS-Green Light Racing, who move their No. 07 entry from Chevrolet to Ford, following a technical alliance with Stewart-Haas Racing. Chase Briscoe and Cole Custer will also see seat time behind the wheel of an SSGLR Ford in 2022.

Since starting an Xfinity Series team in 2016, Kaulig has rapidly become one of the teams to watch out for on race weekend. In 2022, Kaulig moves to Cup full time with the team’s three-season veteran Justin Haley.

Haley was a part of a trio of drivers in 2021, alongside AJ Allmendinger and Jeb Burton, and Allmendinger remains and will attempt to win the Xfinity championship once again in the No. 16 Chevrolet.

Haley is replaced in the team’s flagship No. 11 car by 2021 Xfinity champion Hemric, and Landon Cassill will pilot the No. 10. Cassill, a 15-year NASCAR veteran and former Hendrick Motorsports test driver, has spent the bulk of his career as a journeyman driver. 2022 represents his first significant opportunity to compete for wins and a championship.

THE REST OF THE FIELD: HOLDING THE COURSE

The appearance of JR Motorsports from 2021 to 2022 looks very similar. Justin Allgaier and Noah Gragson return to the Nos. 7 and 9 Chevrolets, respectively, while Josh Berry, who started 18 of his 22 races in 2021 with JRM and won two races, moves to full-time status, piloting the No. 8.

The main change is Sam Mayer, who drove the No. 8 for JRM in the second half of 2021. He replaces Michael Annett in the No. 1 entry after Annett retired following 2021.

Team owner Dale Earnhardt Jr. will attempt to start his sole Xfinity event of the season at the spring race at Martinsville Speedway in the No. 88, and Miguel Paludo will also return and attempt races for the fifth car at Circuit of the Americas, Road America and the Indianapolis Motor Speedway road course.

Three underdog team and driver combinations return in 2022, including Jeremy Clements, who returns to family-owned Jeremy Clements Racing, where they’ll look to improve on 2021, which was the best statistical season for Clements’ career.

Big Machine Racing Team finished a respectable 24th in owner points in its inaugural season in 2021, and Jade Buford returns in 2022.

Brandon Brown and Brandonbilt Motorsports also return in 2022. Brown scored his first career victory at Talladega last season and signed a deal with cryptocurrency meme coin LGBcoin.io to sponsor him for the entire 2022 season. NASCAR ultimately denied it the sponsorship, but Brown will reportedly continue to be partnered with LGBcoin, though no decals will be featured on his car.

Except for one weekend in 2022, the Xfinity Series will accompany the Cup Series throughout the season as a support series.

Minor changes include the return of Auto Club Speedway, which was dropped from the 2021 season due to COVID-19 restrictions at the beginning of last season. As a result of Auto Club’s return, the road course at Daytona International Speedway is absent from the schedule.

Homestead-Miami Speedway moves from early spring to October. It will be one of the three races in the Round of 8 for the Xfinity playoffs, alongside Las Vegas Motor Speedway and Martinsville.

COTA moves from May to March, and the first trip to Texas Motor Speedway moves from June to May, where the Xfinity Series will be a support race for the NASCAR All-Star Race.

The first major change pertains to the sole standalone race weekend the Xfinity Series will have in 2022. In 2021, that honor fell to Mid-Ohio Sports Car Course, but Portland International Raceway replaces Mid-Ohio in 2022.

A traditional host to American open wheel racing, Portland previously hosted two NASCAR Camping World Truck Series races in 1999 and 2000. It has also hosted six races in the ARCA Menards Series West, including one in 2021.

The inaugural Xfinity race at Portland takes place on June 4. Mid-Ohio, meanwhile, isn’t dropped from NASCAR entirely as it will host a Truck race on July 9.

The second major change is Atlanta Motor Speedway’s reconfiguration, as it joins Daytona and Talladega under the superspeedway track classification.

Speaking of types of tracks, the 2022 calendar will be filled out by six superspeedway races, six road courses and four short tracks, and the remaining 17 races will be on traditional speedways between 1 and 2.5 miles in length.

The regular season again consists of 26 races, beginning at Daytona (Feb. 19) and ending at Bristol Motor Speedway (Sept. 16). The twelve drivers who make the playoff field will compete in seven playoff races, beginning with the Round of 12 at Texas Motor Speedway (Sept. 24). The Round of 8 starts at Las Vegas (Oct. 15), and the Championship 4 race takes place at Phoenix for the third straight year on Nov. 5.

WHY YOU SHOULD WATCH

Allmendinger, Cindric and Gibbs were the overwhelming favorites at road courses last season, winning five of the seven races.

2022 will feature only Allmendinger and Gibbs, as Cindric moves up to the Cup Series. Both will be the favorites to win on the tracks featuring left and right turns and the championship. Allmendinger was one of the strongest contenders last season, and Gibbs finished 13th in the final standings, despite only starting 18 races.

Allmendinger finished in the top 10 last season in two thirds of the races and finished in the top five just about as much. The same can be said for Gibbs, who scored 10 top-10 finishes and nine top fives. Their consistency and composure under pressure will be critical to defeating the other across 33 races.

Of course, Allmendinger and Gibbs won’t be the only drivers with a chance to win on road courses or the championship, but if 2021 is any indicator, they will be the early favorites. Other notable picks to win the championship are undoubtedly Allgaier, Berry, Creed, Gragson, Jones and defending champion Hemric.

Speaking of Berry, will he be able to retain the magic of 2021? As last season progressed, his confidence grew, and his ability shined brighter. He’s given short-track racers across the country a voice and hope that given the right opportunity, any driver can shine. Going full-time with JRM and having an owner that believes in him fully in Earnhardt, Berry is one to watch and maybe even a sleeper pick for the Championship 4.

Cassill is another driver to pay attention to across the whole season. The opportunity he has with Kaulig is similar to Alex Bowman subbing for a sidelined Earnhardt at Hendrick or Ross Chastain racing for Chip Ganassi Racing in select Xfinity races in 2018 instead of his usual JD Motorsports with Gary Keller ride. Before his season, Cassill hasn’t raced a car capable of winning outside of a freak weather-shortened or superspeedway race. Kaulig, meanwhile, doubled its career win count in 2021, and its 2022 lineup is arguably the strongest ever.

Don’t expect Cassill to win right away, but as the summer months approach, start paying closer attention to the driver of the No. 10.

But one thing is for sure; the Xfinity Series will continue to provide some of the best racing you can watch anywhere. The field contains veteran racers and future stars of the Cup Series. The top teams are always ultra competitive, and mid-field is a strong weekly battle.

Will the dominant driver and team win, or will a late caution give the underdog team a chance to squeak out a win to avoid the worry of pointing their way into the playoffs? If you’ve never taken the time to watch the Xfinity Series before, do it in 2022.

It’s weird that NASCAR denied a Crypto-currency literally based on this guys name. Had it not been for the reporter, this would be perfectly fine. His stats have been solid the past couple of years, and he is a fun guy to watch on the track. Wish NASCAR would step in and help this guy get a sponsorship, but I guess it would take away from there pockets.