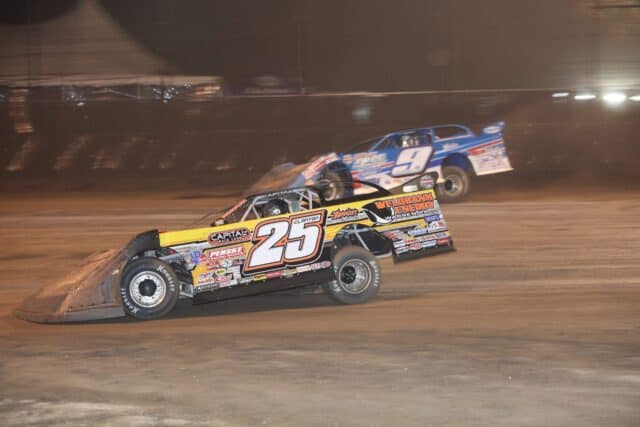 Brandon Sheppard’s bid for Winternationals history was finally stopped courtesy of Speedweeks’ other hottest driver. Taking the lead with a ferocious charge on a lap 34 restart, Devin Moran passed Sheppard and drove off to the $15,000 victory in the East Bay finale, his third win of the 2022 season.

Sheppard, who after winning on Friday already became the first driver since Josh Richards in 2009 to win three consecutive Winternationals features, quickly overtook Brandon Overton for the lead on lap 4 of Saturday’s feature and proceeded to lead the next 29 circuits before Moran’s eventual race-winning pass.

Sheppard, who still remains the LOLMDS points leader leaving East Bay, hit the wall in turn 4 the same lap that Moran took the lead, falling to 12th and soon retiring from the race.

David Gravel spanked the World of Outlaws field with a dominating performance Saturday that saw him win the Dash before leading flag-to-flag in the feature event, but the series’ real headlines came Friday night, with Sheldon Haudenschild coming out tops over a three-car battle for the race lead that came down to a photo finish.

. @DIRTVision REPLAY: It was a photo finish tonight at @VolusiaSpeedway Park!@Haudenschild_17 steals the win after being third with the white flag waving!#OutlawTough pic.twitter.com/xrevwt9GQ3

The closing 10 laps of Friday’s feature was the best sprint car race of any kind in recent memory, with last year’s 1-2 finishers in Outlaw points, Brad Sweet and Gravel, both proving unable to keep Haudenschild’s late-race charge at bay.

Gravel leads the early-season points standings leaving Volusia, with the Outlaws now on hiatus until returning to Magnolia Motor Speedway on Feb. 25.

Larry Wight not only won his first career Short Track Super Series race Thursday at All-Tech Raceway, he followed that up with a points crown in the Sunshine Swing on the back of three consecutive top-five finishes.

Justin Grant swept the two opening features of the 2022 USAC national midget season at Bubba Raceway Park, scooping up $9,000 for the victories. Grant’s performance on Saturday was masterclass, both in keeping defending national champion Buddy Kofoid at bay for the final five laps and for the precision “pick-pocketing” he used to make the eventual race-winning pass on Jade Avedisian in lapped traffic with 12 to go.

Nick Hoffman won his first three features of 2022 despite a revamped UMP rulebook that is believed to have been configured in response to his dominance of this form of racing in 2021, including the $5,000 Saturday finale at Volusia in commanding fashion. Maybe DIRTcar would be better off funding a super late model for Hoffman to drive as a means of making modified racing more competitive?

Volusia update. Made enough to cover the pit passes, and a trip to Disney. I now own 29 gators. Full fender racing this week at Volusia.

Kraig Kinser’s strongest WoO run in recent memory went all for naught just after halfway in Saturday’s feature, with a blown right-rear tire sending him into the turn 4 wall while running second at Volusia.

Thomas Meseraull flipped not once, but twice, in Saturday’s USAC midget feature at Bubba, with the second proving to be a violent affair that broke his rear axle and send the right rear tire on the car flying down the length of the frontstretch. Meseraull was uninjured.

.@TMezdriftz takes a nasty roll after he loses the right rear on the front stretch @BubbaRaceway! TMez is ok 🏁

Brenham Crouch also endured a flip in USAC midget competition this weekend, being diagnosed with a concussion but released from the hospital.

Not only did Josh Richards struggle in the races he did contest at East Bay this week, he endured a disaster of a different kind with his camper suffering a total loss.

Our Lord and Savior Jesus Christ saved us 2 nights ago. We were in our camper parked at a Walmart in Florida waiting to…

I’m sincerely unsure if I’ve watched a modified feature during Speedweeks 2022 that didn’t see the No. 22 of Plant City, Fla.’s Dale Kelley spin out in it. He brought out three yellows for unassisted spins in Saturday’s third makeup feature.

The hardest wreck of the late model Winternationals at East Bay came in the second LOLMDS heat race on Friday, when Chad McClelland absolutely clobbered Josh Putnam after he spun in turn 4.

Xfinity Series regular Justin Allgaier finished second in Friday’s modified feature after leading the pre-race invocation at Volusia. Allgaier was adamant that his car had something for Friday winner Wil Krup in the closing laps had the race not been cut short. He finished sixth in Saturday’s modified finale at Volusia, tops among NASCAR drivers in the field.

Former Xfinity Series competitor Steve Arpin dropped like a rock from his up-front starting position Friday, falling to the back of the top 10 before spinning on his own early in turn 4. Arpin rebounded to finish second in the fourth makeup feature on Saturday, but despite a top-five run in his last-chance showdown missed Saturday’s finale.

Cup Series regular Alex Bowman went three-for-three in qualifying for WoO features in his debut weekend with the tour, though he found himself lapped early in both Friday and Saturday’s features.

Truck Series regular Matt Crafton was the biggest beneficiary of Friday’s first modified feature at Volusia being cut short, snagging the 10th and final transfer spot into Saturday’s finale. Crafton opened Saturday with a strong charge into the top 10 during the fourth makeup feature, then finished 11th in the finale feature.

Truck Series regular Stewart Friesen scored a top-five finish Friday in Short Track Super Series competition at All-Tech Friday night, charging from outside the top 15 to do so. A late-race yellow and Friesen may have challenged for the race win.

Former Cup Series competitor Kasey Kahne’s WoO campaign is off to a pedestrian start, with the team owner finishing 16th in Friday’s feature on a night where teammate Brad Sweet challenged for the win. Saturday didn’t get better, with Kahne enduring the hardest crash dirt racing has seen in 2022 on the first lap of the last-chance qualifier.

Defending Cup Series champion Kyle Larson proved to be a complete non-factor in Friday’s WoO feature at Volusia, finishing 12th after having to pit mid-race. Larson again struggled mid-pack on Saturday, forced to pit mid-race with a flat tire while running 12th.

Former Cup Series competitor David Stremme used the extreme low side to get underneath Mike Harrison with seven to go, taking the win in the fourth makeup feature at Volusia Saturday. Stremme finished seventh in Saturday’s finale feature.

Not to be overly dramatic, but the efforts of Volusia Speedway Park’s track crew to improve their racing surface after Thursday’s ugly display forced the entirety of the UMP modified program to be canceled over safety concerns were the stuff of miracles. The surface did get chunked up over the course of the modified marathon program later in the evening, but the surface put on a World of Outlaws feature for the ages. Job extremely well done VSP.

Maybe it’s just because I had the God-awful Jurassic World: Dominion trailer on the brain, but this was the first image that came into my head looking at the massive piles of clay that Volusia had to remove from their track surface to get back into racing shape this weekend. Maybe once the final Winternationals is contested at East Bay in a few years they can move that clay from Tampa to Volusia?

I’m assuming the decision to put a time limit that saw the first modified feature at Volusia on Friday end nine laps short of the finish was to give the track maintenance crew as much time as possible to rework the facility for Saturday, but it’s kind of hard to stomach sitting through a racing program that lasted more than eight hours end short come feature time. The damage was done by that point.

There was a ton of complaining on social media about a delay in the start of Friday’s LOLMDS Winternationals feature at East Bay, a delay that occurred due to a medical emergency in the grandstands that necessitated the ambulance at the track leaving the facility. As a result, the race was delayed until another unit arrived on the scene.

I obviously don’t know the situation.. and don’t want to be unsympathetic as the situation might warrant major attention.. BUT, here’s my tweet reminder that all tracks should have EMS designated for both grandstand and pits.

While Ms. Rumley’s comments on the delay were among the most civil of the bunch, the entirety of the consternation from race fans about the delay came off tone-deaf. It’s 2022. The COVID pandemic is ongoing, no matter how impatient the citizenry is, adding onto an existing nationwide shortage of EMS personnel. Short tracks have already had to delay races this season due to lack of EMS availability. Eat some more shortcake and keep some perspective.

13 – number of dirt tracks that ran circle-track programs this weekend.

75 – top car count at the late model Winternationals at East Bay this week.

Where it Rated (on a scale of six cans with one a stinker and a six-pack an instant classic): We’ll give the weekend a solid four Blue Moon with some sweet orange slices. Friday’s Outlaws feature will be a race of the year contender at season’s end, and East Bay’s late model Winternationals didn’t feel like nearly the yellow-flag parade it was a year ago. If only Volusia’s UMP modified program hadn’t gone for literal ages.

Up Next: The DIRTcar Nationals roll on at Volusia with the World of Outlaws late models coming to town starting Monday night, and the All-Star Circuit of Champions heading to East Bay. Coverage can be found on DirtVision and Flo Racing, respectively.