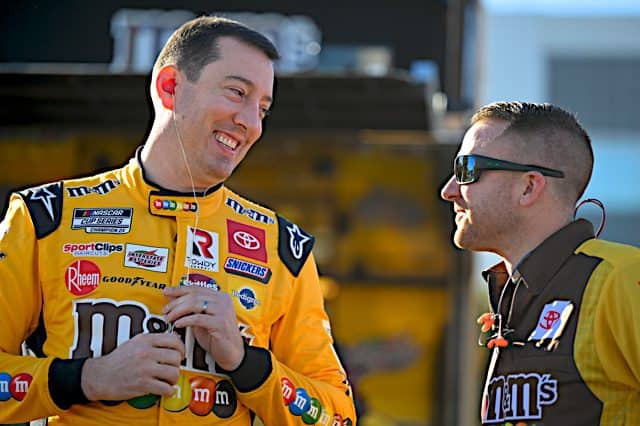 Did You Notice? … The 2022 NASCAR Cup Series season is finally upon us? As Speedweek kicks off down in Florida, the sport hopes to keep momentum flowing two weeks after its well-received L.A. Busch Light Clash at the Coliseum. Sunday’s (Feb. 20) Daytona 500 launches 36 points-paying races in 38 weeks, the most condensed schedule in the sport’s modern era.

Front and center is the sport’s Next Gen chassis, a brand new stock car for the first time in almost a decade. There’s a lot riding on its success (or failure) as the sport tries to sell itself to a new wave of potential owners and manufacturers.

But to focus on just the car would be silly in a sport where driver personalities ultimately take center stage. Here’s a look at where we stand in the Cup Series and how 2022 is set to shape up.

Can Hendrick Motorsports be beaten? Since the sport’s Championship 4 format was adopted in 2014, no driver has pulled off back-to-back Cup titles. But HMS did it at the ownership level in 2021, following up Chase Elliott’s first ever championship with one from the unemployed-turned-unstoppable Kyle Larson. HMS drivers combined to win 17 of 36 races last year and joined Joe Gibbs Racing in sending a pair of drivers into the championship round (Larson, Elliott).

This organization enters the year with the youngest quartet of drivers in the entire series: Elliott, Larson, William Byron and Alex Bowman are all under 30 years old and entering the prime of their careers. Each one is backed by multi-million dollar sponsorship, almost all of which is signed well beyond 2022.

Compare that to the other major teams in the sport. Team Penske is in transition, welcoming a rookie to their three-car team (Austin Cindric) after losing veteran Brad Keselowski to an ownership opportunity. JGR suddenly looks past its prime, with two contenders over 40 years old and a third (Kyle Busch) turning 37 this year and slated to lose primary sponsorship at the end of the season. Stewart-Haas Racing’s lone title contender, Kevin Harvick, is the oldest full-time driver on the circuit at age 46.

That sets up HMS to have a monstrous season across the board if they can figure out the Next Gen quickly. Some obstacles: common parts and chassis selection will erase (somewhat intentionally) their competitive advantage over the field. Everybody starts from square one, and past success means even less compared to past years.

There’s also two contracts that need to be extended: Elliott and Byron. It seems inconceivable either will leave after 2022 but keeping everyone happy and winning is always a tricky balance. As NASCAR’s Most Popular Driver, Elliott clearly played second fiddle all last season to Larson (10 wins to two) and is not someone you’d think would embrace the role of sidekick long-term.

How will Harvick and Stewart-Haas Racing respond? Speaking of Elliott, his rivalry with Harvick was a dominant storyline within the NASCAR playoffs. In the end, while Harvick got revenge for their Bristol Motor Speedway contact at the Charlotte Motor Speedway ROVAL, it was the No. 4 team knocked out of the playoffs. Harvick suffered through his first winless season since coming to SHR in 2014. Keep in mind that’s one year removed from a nine-win season close to the domination Larson showed in 2021; it was the most wins in modern NASCAR history for a driver age 44 or older in a single season.

Somehow, Harvick still finished fifth in points, a miracle for a SHR organization ending 2021 suffering across the board. Aric Almirola, despite scoring the team’s only win and making the playoffs, struggled all year and announced his retirement effective the end of the 2022 season. Chase Briscoe had more high-profile arguments with Championship 4 drivers (one, Denny Hamlin) than top-five finishes (zero) over a frustrating rookie campaign. And Cole Custer couldn’t even muster Paul Menard-like numbers, finishing no better than 10th as the son of SHR’s president found his NASCAR Xfinity Series stardom fading into the distance.

That brings this organization to a full crossroads. Co-owner Tony Stewart is newly married and newly enamored with a successful SRX project entering its second year. The TV booth is ready and waiting for Harvick, money in tow should he choose retirement. And will the sponsorship money from Smithfield stay when Almirola bolts at the end of the year?

Can old dogs learn new tricks? The first year of the Gen-6 chassis, in 2013, found some familiar faces up front. Jimmie Johnson won his sixth NASCAR title, trailed by 2003 series champion (then age 41) Matt Kenseth. Harvick and Kyle Busch finished right behind them; all of them had 9+ seasons of experience at the Cup level.

The question is whether this new chassis will tilt the veterans’ way once again. Changes meant for equality are also designed to put racing back in the driver’s hands. On paper, you’d say that favors guys like Harvick, Truex, Hamlin, guys with top-tier support who have been around a while.

At the same time, a lot of offseason buzz in the garage area concerned the Next Gen learning curve. It’s a completely different type of car to drive, the shape and feel surprising even one-time celebrity drivers like Clint Bowyer and Dale Earnhardt Jr. Will the older drivers, balancing everything from family to ownership (Hamlin) be able to put in the OT needed to succeed?

If not, Harvick may not be the only driver slated to retire in 2023. Think Truex, Kurt Busch, even Hamlin as 40-something year old drivers approach expiring contracts.

The conundrum of Kyle Busch. Busch started the 2022 season learning primary sponsor M&Ms would leave him at the end of the year. He also announced a retirement (at least for now) from a NASCAR Xfinity Series where he’s moonlighted for a record 102 career wins, going a perfect five-for-five during a limited schedule last season.

That leaves Busch developing Kyle Busch Motorsports, his Camping World Truck Series and now ARCA Menards Series team, while running just Cup for Joe Gibbs. And the thing about that No. 18 Toyota? It hasn’t been visiting victory lane so much on that side, winning just three times the past two seasons. It’s the fewest number of wins for Busch in a two-year time span since he drove the No. 5 for HMS in 2006-07.

At the end of that, Busch bolted HMS for JGR. Is he prepping for another big move in 2023? Busch said he was “not ready” to discuss his future last month and came out of the box strong, leading the most laps during the Coliseum exhibition main event. But Busch needs sponsorship and a young, hungry Ty Gibbs is about to light up NXS full-time. I’m not thinking Grandpa Joe is going to stick him on a satellite team somewhere.

It leaves Busch perhaps the biggest Silly Season domino if he becomes available. Even juicier, he could be in championship contention when contract negotiations are underway. Ask Brad Keselowski how that goes.

Bits and pieces. Will Kurt Busch push Bubba Wallace to be a star in his second season with 23XI Racing … or will Busch’s presence backfire if he runs circles around the No. 23? Can Hamlin finally dump the Mark Martin label and win a title at age 41? Will Austin Cindric buck the trend and actually have a successful, winning rookie season after some awkward transitions from NXS? How far behind is RFK Racing; is it possible to clean it up in time for them to make the 2022 postseason? And how will the hotshot new Kaulig Racing team do, in particular its second team (No. 16) built as win-or-bust with NXS stars Daniel Hemric, AJ Allmendinger and Noah Gragson? That mentality earned Allmendinger a surprise 2021 victory in a crown jewel race, the Indianapolis Motor Speedway road course.

The new car is the only thing that matters to NA$CAR. If it flops, like a lot of us expect, after all the hype it will not look good on them.

Can’t believe Kyle Busch is 37. At least I am not the only one growing older.

One other note about Tony Stewart: In addition to the recent marriage, season 2 of SRX, don’t forget he is also launching 2 new NHRA teams. Guess we’ll find out if Zipadelli can lead the comeback charge for SHR.

I don’t think the comeback can happen until both Harvick and Almirola are in the rear-view, even though either could have a successful 2022 season. The point is that until they can see their path for the next 5 years (at least), they are clinging to their past. Sort of like the Steelers were this year with Ben Rothlisberger. Now that he has retired they can start building what they hope will be their next 5 year plan.

You’re right, Haas apparently lost interest on the NASCAR side a long time ago. Last season it looked like Stewart has as well. Don’t see that changing anytime soon.

Guessing Haas has been distracted by his F1 venture. He probably spent most of last year stomping out all the fires started by Mazepin. lol

The most important key to the new car, is people. From drivers, to CCs, crews, engineers & the entire support people at the shops. With a team like Hendrick, their people are all top notch.
They have that advantage, but if a season is judged by whether it wins the Championship. Then things get tougher, NASCAR has deliberately designed it’s championship format not to deliver the most deserving champion. But to create drama.
Don’t forget that Larson was only a brake rotor away from finishing 4th. There won’t be any runs like Jimmie Johnson’s string of championships with this format.
That having been said, I still expect HMS to have at least 2 cars in the final 4 again. Which 2?, time will tell.

So has anyone heard if qualifying and/or practice will be back or are they sticking to their “algorithm” to make sure the top drivers always get to start up front?

I would think with a new car, practice would be needed each week until they build up notes for each track.

I still think they should do a reverse starting order based on season points standing since drama is the new way of NASCAR. Think about all the nail-biting moments (especially later in the season) as the top 16 all try to get by Wrecky Spinhouse without incident!

You better stop saying stuff like that in print. While we all know you are joking, NASCAR will think it’s a good idea and say they are just giving the people what they want.

Are you the one that came up with The Chase?!!!

The Chase was definitely NOT my idea! lol

Maybe next year NA$CAR can run the Clash on the Long Beach track. It could be set up for the right price. Give them one more lefty-righty EVENT.