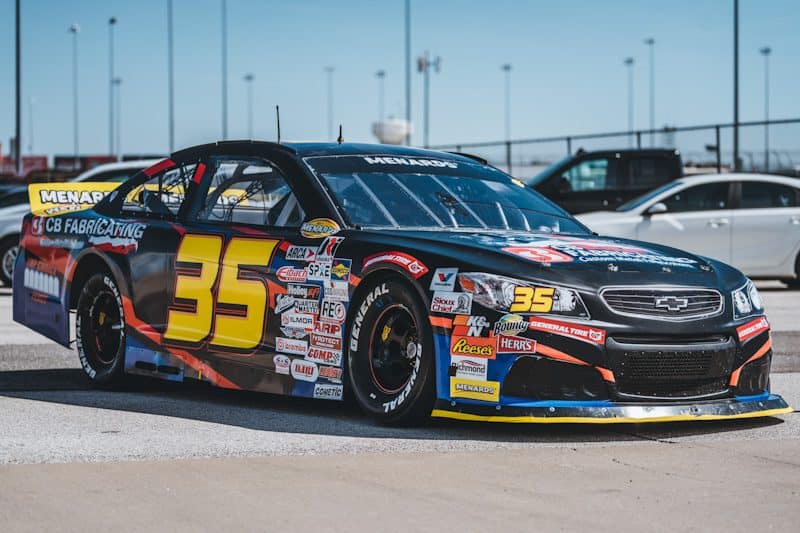 Greg Van Alst, driver of the #35 CB Fabricating Chevrolet, drives back in to the garage area during practice runs at the Dutch Boy 150 for the ARCA Menards Series at Kansas Speedway in Kansas City, Kansas, on May 1, 2021. (Jason Hanna/ARCA Racing)

Greg Van Alst is focused on the ARCA Menards Series this year. He intends on contending for victories and running the full season, Van Alst told Frontstretch.

Van Alst will again pilot his own No. 35 with Jim Long reprising his role as crew chief.

“We are starting out like we are running the full schedule,” Van Alst told Frontstretch. “We have the first five races for sure. Just going to take it race-by-race through the season. We are just doing everything we can do on our end to make each race happen. We’re still looking for more sponsorship.”

When Van Alst is at the racetrack, he expects to be a contender, though Van Alst Motorsports does not have any full-time employees. He reinforced the idea that his first goal this year is to win a race and running full-time chasing the ARCA championship is second.

“First, our goal is to win a race,” he said. “I am doing everything I can, CB Fabricating [owner Barkdull] is doing everything he can, we are trying to do some business-to-business deals to secure some sponsorship funds. The second goal then would be to run full-time. If we put our focus on each race, then we can put something together to win a race. On the back end of things, I have to worry about the business side so we can make it to every race.”

Van Alst is committed to being as competitive as possible at every race.

“I don’t want to sacrifice something at the track so I can make another race,’ he said. “We’ll have the maximum tires bought for every race so we can be competitive, not to continue throughout the season. We’re going to the racetrack to win first and foremost.”

The road course car is a new addition to the Van Alst Motorsports fleet. Van Alst bought it from Chad Bryant. Van Alst funded that purchase by selling all his late model equipment.

Van Alst is psyched to race that car at Mid-Ohio Sports Car Course, noting it is Barkdull’s favorite road course.

This offseason has been a busy one for Van Alst. His late model equipment funded purchasing both that road course car and two engines. Overall, Van Alst has three engines in his fleet.

To further focus on excelling in ARCA this year, Van Alst built a new barn on his two-acre property in Anderson, Ind.

“Our problem was also we didn’t have enough shop room,” he said. “Our shop now is 45 by 30, and once there’s a car in there, there are five feet in front and behind of it. There are two lifts for two cars. So we started building a barn, hopefully finished by Daytona so my team can work on any car at any time.”

Got the drive for the new race shop cut in today! pic.twitter.com/9x1WXEjGjC

In preparation for running the full ARCA schedule this year, Van Alst wants to always have three race-ready cars. His team is already working on the car for the second race of the season at Phoenix Raceway, then they will turn their attention to their Kansas Speedway car.

Last year, the team lacked the equipment and inventory to prepare for future races when they had time. This new goal should allow the team to maximize their time on each car.

There are only five races on the ARCA calendar before Memorial Day. Van Alst is hopeful that in-between time will give the team time to prepare for the grind of the season so they are not thrashing and sweating for an upcoming race.

Last year, the team did all the maintenance work on the cars at their small shop with a basic setup. Then Van Alst took the cars to Bryant’s former ARCA shop, where Long used the pull-down rig there to finish the race setups.

With more shop room now, Van Alst expects to do more work on the cars so they can set up two cars simultaneously down in North Carolina thanks to his hauler capable of holding two cars.

At most races, Van Alst’s pit crew is guys from his late model team. As a result, the modified pit stops procedure is beneficial for Van Alst.

“The modified pit stops are huge for us because all these guys have full-time jobs and volunteer their time with us,” Van Alst continued. “So, we do not have to be fast on pit road. We may come in towards the front, and with these [modified pit stops], we get to keep our spot.

“Sometimes we hustle so we do not lose a lap, but they’ve gotten better. Hopefully, the extra room in the shop will allow these guys to get some pit road practice. The modified pit stops are one of the major reasons we can run ARCA. If it were not for those modified pit stops, we would be able to run, we would not run as many races, or we wouldn’t be competitive because we would fall back every time.”

At a few races where ARCA was in town with the NASCAR Camping World Truck Series, Van Alst used some Truck pit crew members. He acknowledged they are faster at pit stops, but they only pit the car. All the other work falls onto his team.

Van Alst earned his career-best finish of second at Winchester, and he was in contention at Talladega Superspeedway before a wreck ended his race. He is still jubilant as he begins this endeavor of running full-time.

“I’ve been racing for so long and it’s always been a dream to run at this level,” he said. “Last year it was hard to get upset with anything. That may crack some this year if we have some unfortunate issues. I truly want to keep everything in perspective that not everyone gets to race at this level, and I know how fortunate I am to be able to do it. I have been racing longer than a lot of people who run in this series have even been alive. It’s still surreal.”