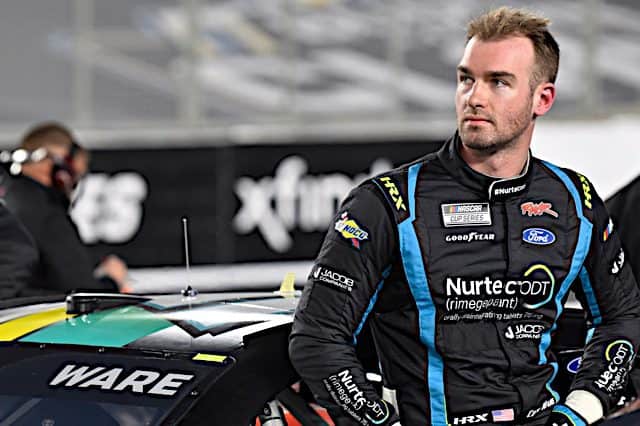 DAYTONA BEACH, Fla. — For years, Rick Ware Racing was seen as the tail end of the NASCAR Cup Series field — a program without the funds to afford top-level equipment but dedicated to getting four cars on the racetrack every week.

But today’s NASCAR Cup Series is different than the one we witnessed three months ago. The Next Gen car has been advertised as the business and engineering model that will level the playing field more than any other decision in NASCAR history. Things have even changed for RWR — they’ve downsized from four cars to two and now have a technical alliance with Stewart-Haas Racing.

Cody Ware, driver of the No. 51 Nurtec ODT Ford Mustang for his father’s team, is capitalizing on what appears to be his best opportunity in his young Cup Series career.

Sure, there have been extremely limited chances in 2022 to glean from, but look what we’ve seen so far: a fourth-place finish in the first last-chance qualifier for the Busch Light Clash at the Coliseum — one spot short of transferring into the main event — and a fourth-quickest lap in Tuesday evening’s (Feb. 15) second practice for the Daytona 500 at Daytona International Speedway.

His teammates have been equally impressive — Ryan Preece wheeled the No. 15 to a de facto win in the second LCQ at the Clash and David Ragan posted the second-fastest time in Tuesday’s opening practice.

Ware admitted he was “cautiously optimistic” after the Clash. That certainly didn’t waver after a strong start to his Speedweeks effort in Daytona.

“To back that up here at Daytona where, obviously, you’ve got to have a fast car, you’ve got to have a good engine to be able to come out here and also back it up with a P2 for Ragan in first practice and a P4 for me in second practice,” Ware told Frontstretch, “[that] really gives me confidence that not only is this Next Gen car a good equalizer, but it’s also a chance for us to step up our program with Haas and with Ford. I’m just really excited to see what we can do this year.”

Ware is conscious of those who have doubted the program even heading into the new season. But there were signs that things were on the upswing over the offseason. In tests at Daytona, the Charlotte Motor Speedway ROVAL and the Charlotte oval, Ware found speed each time he hit the track. Still, the 26-year-old tempered even his own expectations.

“I was happy with how we ran there, but obviously wanted to get to race conditions,” Ware said. “So obviously, doing well at the Clash and now doing well here, it’s like now we have some more valid proof of what we’re doing and what we’re accomplishing this year. And I think that I really couldn’t ask for more.

“I mean, if you’d have told me I’d be top five today, I would have been a little skeptical. So I mean, all things considered, I’m just super, super happy and really proud of this team and obviously having Nurtec ODT on board, and just all this has been really positive so far.”

Nevertheless, the unknowns linger ahead. Neither the Los Angeles Memorial Coliseum nor Daytona are truly representative of the majority of the 2022 Cup Series schedule. Momentum can be critical to a team’s outlook, though. And with help from SHR, Ware has set higher expectations for himself this season.

See also
Did You Notice? ... 2022 NASCAR Storylines Besides the Next Gen

“My goal for the year is top 25 [in points],” Ware said. “Pretty stout ask. That’d definitely be really hard to attain; you’re racing against guys like Stewart-Haas, [Cole Custer] and [Chase Briscoe] and stuff like that. But I think that’s a good way to try to better ourselves from where we’ve been in the years past.

“My goal is much more of a long-term goal than it is just going for broke every weekend. And so I think if we just keep these cars in one piece, keep building our stable of cars with the Next Gen car and be able to just have these good points days, I think it’s gonna pay off throughout the season.”

And while that alliance should pay dividends toward rising RWR through the Cup Series points standings, Ware explains the partnership is “mutually beneficial.”

“They got to have an additional car to work with and learn from,” Ware said of testing. “And then, from our side, we’re getting a lot of this setup information, the shock builds with these new spec shocks and things like that. And they get to try things with us, and a lot of what we’re going to be doing throughout the year is hopefully kind of being one of their R&D cars and trying things for them and working with them to be able to make some risks, but also hopefully have some speed as well.”

It’s impossible to say whether this first impression is indicative of what’s to come for Cody Ware and the rest of the RWR outfit. But starting on the right foot gives hope that maybe, just maybe, this is the start of an uptick in performance for an up-and-coming team.

Daytona 500 pole qualifying begins Wednesday, Feb. 16 at 8:05 p.m. ET on FOX Sports 1 and the Motor Racing Network, followed by the Bluegreen Vacation Duels to set the rest of the starting lineup Thursday night at 7 p.m. ET on FS1 and MRN.

I’ve been favorably impressed by RWR with what I’ve seen so far. We can get an idea by the way they run at Daytona. But the finish always seems to come down to mostly luck. After Daytona, it’s more in their hands, & RWR, & RFK, are two teams that I will be watching closely.