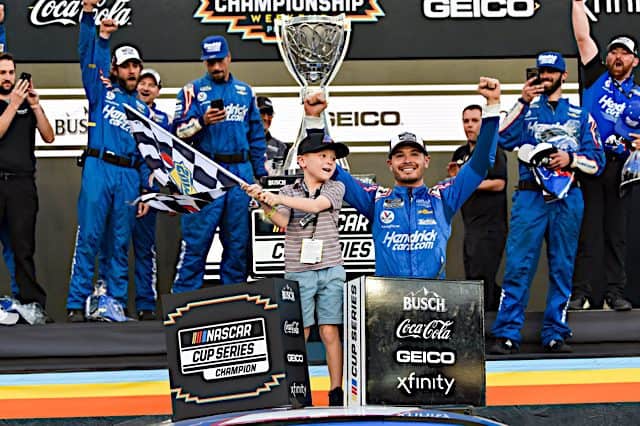 Coming off a remarkable 2021 season that saw him win 10 races and his first championship (that really never seemed in doubt), Kyle Larson would, in most years, be the odds-on favorite to repeat his success. With the 2022 NASCAR season set to kick off this weekend with the 64th installment of the Daytona 500, the landscape for this season is almost unrecognizable compared to the last six years. A completely different car for one, new venues and scheduling changes, plus – the numbers have MOVED! But the biggest variable is, of course, the NextGen car itself.

Given all these changes, is Larson the 2022 Cup Series championship favorite? In this year’s first installment of 2-Headed Monster, Jesse Johnston and Vito Pugliese offer their takes on what the new season may hold.

Kyle Larson repeating as a Cup Series champion? How could anyone even doubt this, especially considering he just won the Daytona 500 pole?

Last year, Larson put together one of the best-performing championship seasons by any driver in the current millennium: 10 wins, 20 top fives, 26 top 10s, multiple stage wins and over 2,500 laps led. You could put his 2021 season on par with Jeff Gordon from 1996-97 or Jimmie Johnson from 2007. It’s just that good.

Larson was seen as a hot prospect from his early days in sprint car and midget racing. His first full-time season in a stock car was in 2012, competing in what is now the ARCA Menards East Series. Guess what? He won the championship. He rocketed through the Xfinity Series in 2013, having several great runs. Then he graduated to the Cup Series by 2014 under the wing of Chip Ganassi. You ought to thank Chip for making this gamble in the first place, because NASCAR and its fans would miss out on a lot if he hadn’t. And it’s sure paying off.

Another reason why Larson can pull off a second straight championship is because of how stout the entire Hendrick Motorsports organization has been.

Ever since Chase Elliott’s maiden Cup Series win in 2018, Hendrick Motorsports has been on a notable upswing. HMS is coming off back-to-back championship-winning seasons (2020 — Elliott, 2021 — Larson) and scored a combined 17 wins with all four of its drivers in 2021, the most since 2007 when the team scored 18 total wins.

Before joining HMS, Larson only had six career wins. Now he’s up to 16 and counting. He couldn’t have landed a better opportunity when coming back to NASCAR in 2021. Now team No. 5 is strong and alive with “Yung Money” continuing to thrive.

Larson’s racing talent is a rarity and shouldn’t be ignored. He’s been in the playoffs for all but two of his full-time seasons in Cup and certainly has enough strength to bring himself and Hendrick Motorsports more glory. He has one championship in the bag, and with him turning a fresh 30 years old this year, he’s bound to win another one eventually, right? The way I see it, him winning another Cup Series championship is more certain than death and taxes. – Jesse Johnston

Jeff Gordon had arguably his second most impressive season in 2007, winning six races and finishing in the top 10 an astonishing 30 out of 36 races. That transition year saw him finish second to Hendrick Motorsports teammate Jimmie Johnson, who was on his way to winning his second out of five consecutive championships.

Looking back at that transition year, you’d think that might actually benefit Larson. Larson’s performance last season was very reminiscent of peak Jimmie Johnson years: 10 wins and an ability to overcome virtually any obstacle on pit road or in the middle of the race turned many weekends into uncontested, dominant performances.

Granted, there were some factors that helped lay the groundwork for that. The last season in an obsolete car meant that Larson and the Cliff Daniels No. 5 team could focus exclusively at the task at hand and maximize the performance of the then-current Gen6 Camaro. Larson, coming off essentially a year layoff, was eager to prove himself and pick up where things left off, prior to the turmoil of 2020. He was largely in a league by himself last year, his three HMS teammates combining to win 30% less races than he did.

It would certainly not be for any shortage of engineering resources. Hendrick Motorsports is the winningest organization in NASCAR history for a reason — and not just because it’s been around for 40 years. The head pig at the Chevrolet trough, it’s long been the dominant Bowtie team. What’s more, Hendrick Motorsports always wins the Daytona 500 pole no matter how its drivers are running.

But a new car brings new challenges. Back when the new Camaro debuted, it took almost two seasons for Chevrolet teams to get their feet under them and figure out the front-end aerodynamics anywhere other than Daytona or Talladega. It’s no coincidence that this also seemed to coincide with the swift production decline of Johnson, who won zero races from 2018 through 2020.

There is a lot of new technology in the new car, with single parts suppliers providing exclusive components. A ground-up launch and rebuild to this degree is one that requires OEM process for testing and development, and engineering resources that have dabbled with similar layouts in the past. This points to a couple of teams who may have a leg up on the competition: the TRD-led efforts of Joe Gibbs Racing and 23XI Racing, and Penske Racing. TRD has always played things pretty close to the vest on the Cup Series side of things, limiting its resources to what is essentially one team in JGR following the demise of MWR after the 2015 season.

Similarly, Penske has long been a racing engineering company whose successes have stretched from the Daytona 500 and Indianapolis 500 to the Bathurst 1000 in the V8 Supercar series. While the Next Gen car is not an Australian Supercar (those actually are pretty close to being stock cars), there are some obvious similarities: independent rear suspensions, sequential transmissions and how these components hold up to shock, heat and impacts over the course of an endurance event.

While not a guarantee of how their NASCAR counterparts will fare, it’s worth noting that there will undoubtedly be some teething issues during the first half of the season as the new car goes through some growing pains.

That’s not a knock on the new car; this happens anytime a new-generation car is brought to competition. Circle of life, Simba.

The playoff championship format will help mute some of those early-season stumbles for the teams, and likely by the time we’re in the elimination rounds, the usual faces will invariably rise to the top. The first half of the year, though, is going to be a crapshoot, with some top teams stumbling and teams which have been relegated to the back half of the top 15 may emerge as early-season contenders.

While I am obviously not counting Larson and HMS out by any stretch of the imagination, I do think we’ll see a reshuffling of the field to a large degree. If there was going to be a team that does hit on it right away and rack up a bunch of wins quickly, I’d be more inclined to put my money on either a TRD- or Penske-aligned driver for this season.

But, if you told me Larson would still be in the Final Four at Phoenix, I’d hardly be surprised. – Vito Pugliese

Taking absolutely nothing away from Larson or the other talented HMS drivers, I think Chad Knaus has a lot to do with their overall success.

The premise that Larson’s championship was never in doubt is news to me. It seemed to me that absent an exploding brake rotor, he was headed for a fourth place finish. NASCAR designed the current format to be a crap shoot, & it is. That having been said Larson has to be considered a favorite any time he straps into any type of car on any surface.
He was a little off (for him) at the Chili Bowl so he’s got some making up to do. He’s in the right place to start.

The concept of a favorite at Daytona is almost ludicrous. The race itself is a total crapshoot. Winning it is more about missing the big wrecks, which is luck, than it is about having a good car. Being the reigning champion does nothing to help you miss the big wrecks.

Crapshoot is right. Brad had it won last year until his teammate wrecked him in the last turn. And Aric had it won until Dillon wrecked him on purpose In the last corner. I just read that some of these teams are racing their ONLY car today. No wonder Brad is holding back.

Granddaughter going to chalk 40 squares with a driver’s number in each square. Pet chicken going to make a dropping in the winners square. That’s as scientific as it comes. Unless there is rain and then all money on the 23.