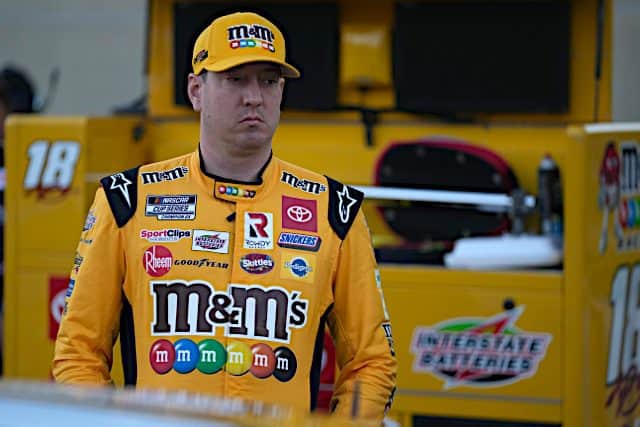 None of those are the “Great American Race.” And he doesn’t need anyone to remind him because he’s conscious of the gap on his remarkable resume.

Busch hasn’t won a points race at Daytona or Talladega Superspeedway since 2008. And yet his teammate, Denny Hamlin, has managed to avoid the calamity and win three of the last six Daytona 500s. The difference, Busch said Wednesday (Feb. 16) during Daytona 500 media day, starts with how each driver prepares.

“I don’t know what his preparations are, but they are probably different than mine which have become more fruit(ful) for him than me,” Busch said. “Maybe I need to change something.”

Busch quickly noted that no amount of preparation makes you immune to fateful incidents on the track.

“In reality, I feel like it’s so circumstantial anyways, I’m like ‘What’s the point?’” Busch wondered aloud. “Do your certain amount of study, watch some film and talk to your guys and strategize what you can, but past that – I was leading the Daytona 500 a few years ago and had a flat left rear, crashed. I was leading the Daytona 500 with 13 laps to go and blew up. Running top eight, top 10 most of the day, another year, finished second or third in that one. Whatever happens, happens. You could be running fourth going into (turn) 3 and win the race or be leading and get wrecked. What’s to study?”

The 2015 and 2019 NASCAR Cup Series champion remains the lone active driver with multiple Cup titles to his name, accompanying 59 Cup wins, 102 Xfinity victories and 61 Truck wins for a grand total of 222. He’s won the Coca-Cola 600 at Charlotte Motor Speedway, the Southern 500 at Darlington Raceway, and two Brickyard 400s at Indianapolis Motor Speedway.

A Daytona 500 win on Sunday would only further Busch’s legacy in the sport.

Some other notes from Wednesday’s media day:

Bubba Wallace has yet to make the NASCAR Cup Series postseason in four full-time Cup Series seasons. His new teammate, Kurt Busch, has been a playoff driver in each of the last nine years.

The duo has their eyes on playoff glory this season as 23XI Racing looks to secure its first postseason berth. Team owner Hamlin made no bones about that on Wednesday.

“I think it is a goal for us to have both cars in the playoffs,” Hamlin said. “I think Bubba isn’t far off from that. It’s one DNF away when you look at the standings of who is a contender to beat. I remember last year we were talking with two races to go from the layoffs – two or three races to go – and it was like, ‘We’re 30 points behind. That’s not that much.’ It’s not that much.”

Wallace had an average finish of 19.7 in 2021, his best in a full-time campaign, but was wildly inconsistent: His October triumph at Talladega was his lone top 10 over the final 10 races of the season.

“Smoothing out the graph on the results chart is important to us and bringing that graph lower and lower,” Wallace said. “It’s something we are just going to fight for each and every week – be more competitive, be more consistent to get that speed up and figure out this new car.

“Everybody is figuring out this new car but making sure we are on the upper tier of those who figure it out first so we can have that advantage. It will take a lot of hard work from myself and my team, but Bootie (Barker, crew chief) and I know that what we have to do is go out and win races and be the best that we can be.”

An underlying storyline heading into the 64th Daytona 500 is that most teams were forced to leave for Florida without the luxury of a backup car.

That stems from parts shortages as common suppliers haven’t been able to distribute said parts as quickly as anticipated due to supply chain issues.

Erik Jones, driver of the No. 43 Chevrolet for Petty GMS Racing, was notably weary about his equipment if he were to crash in his qualifying race (7 p.m. ET, FS1).

“Unfortunately, we’re in a spot where we cannot wreck this car before the 500,” Jones said. “We have to get it into the race and start it.

“I think most people are in that spot, but I think we’re a little more than some with the parts and pieces and the cars we have lined up going forward from here onto Fontana and on from there.”

Of course, not everybody has that same mindset. Joey Logano, for example, said his plan is to race Thursday exactly as he plans to race Sunday.

“I am planning to go race,” said Logano, the 2015 Daytona 500 champion. “I think as soon as you get scared of crashing and those types of things, you are never going to win. So I am going to go race and if we crash, so be it, we will figure it out. I feel like going out there to race to win and try to get those points.”

Wallace had an average finish of 19.7 in 2021, his best in a full-time campaign, but was wildly inconsistent: His October triumph at Talladega was his lone top 10 over the final 10 races of the season.

No backup cars after tonight’s races, for many teams, according to this article. So what’s the incentive for a lot of teams, to attempt to win it. A driver owner like Brad is smart and just try to stay out of trouble.