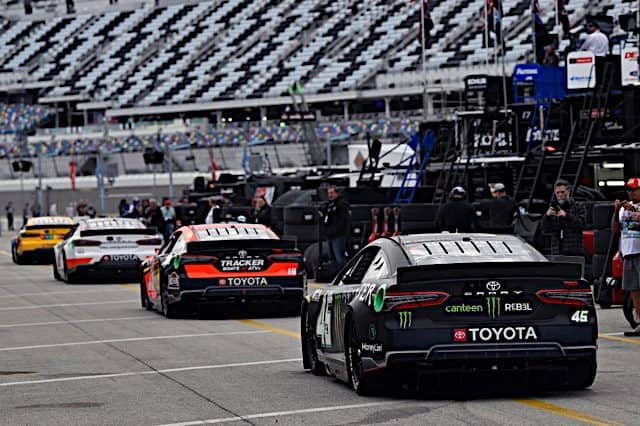 The NextGen car presents a new era for NASCAR, but will the normal drivers who dominate at superspeedways remain up front for Sunday’s Daytona 500? – Aaron P., Orlando, Fla.

The real answer is that we won’t know until the checkered flag of the 64th running of the Great American Race, but conventional wisdom points to yes.

It’s hard for me to believe the likes of Brad Keselowski (albeit with a new team), Denny Hamlin (who – *GASP* – didn’t win the Daytona 500 last year), Joey Logano and a host of others will suddenly be mired mid-pack and unable to make any progress forward. NASCAR might not look the same, but the drivers’ talent remains unchanged.

But as is the case with any superspeedway race, unpredictability comes at every corner … literally. The seas parted for Michael McDowell last year entering Turn 3 and boom, he’s a Daytona 500 winner. Hamlin has repeatedly said despite his three triumphs, the ones that got away haunt him even more.

And as for the potential to “hang back” and not go too hard to damage equipment that’s already scarce with the supply chain issues, that’s true to an extent. Sure, going all out on lap 15 of a 200-lap race doesn’t make much sense in any scenario — moreover one where parts are a genuine concern.

But as multiple drivers have said: once the visor comes down, the engine comes on and the green flag comes out, race car drivers become, well, race car drivers. They’re not team owners, financial managers or anything on the other side of things (well, maybe not Hamlin and Keselowski as much anymore, but you get my point).

Daytona and Talladega always present the opportunity for the lesser teams to shine. But the best drivers at the superspeedway craft, regardless of what series of vehicle, will always rise to the top.

With the new wheel, pit stops will likely fundamentally change. But how will strategy also be affected? – David M., Queens, N.Y.

Strategy will change a ton with the Next Gen car. Because of the time it’ll take to change tires versus fuel the car, crew chiefs will be forced to make decisions: pack it full or gamble? Take two or four tires?

With the single lug wheel still requiring two tire changers, two tire carriers, a jackman and a fueler, the choreography of the pit stop will largely remain unchanged. Teams have been experimenting on a different flow of pit stops, but one thing is unsurprising: the times are going down.

And with that will come the aforementioned decisions from crew chiefs while races are playing out. Tires could make the difference between winning and losing a given event, but so could the lack of said Goodyears. What about fuel mileage? Will waiting an extra 2-3 seconds on fuel cost a driver the win, or will it do the opposite and allow them to milk it for every last drop?

We won’t see any of those strategic games played at Daytona, but once the West Coast swing hits in full force and the real 2022 season is off and rolling, it’ll be the beginning of a shift in mindset for those atop the pit box.