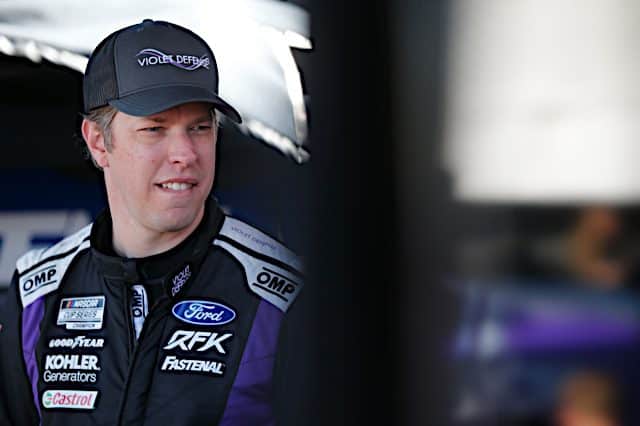 It’s Keselowski’s first win in the Duels and the second-ever Duels victory for his team. He will start the Daytona 500 from third place.

“I felt pretty good about our car in practice,” Keselowski told FOX Sports 1 after climbing out of his No. 6 Ford. “Give credit to the other Fords, we worked really well together. Ryan Blaney, Chase Briscoe, Austin Cindric … we had a great strategy, we stuck together, and we drove away and put ourselves in a position to control the finish of this race and I’m happy to see those Fords up front. Good job to all those guys. Great start for our team. This is special.”

Rookie Cindric finished second. Cindric replaced Keselowski as the driver of the No. 2 Team Penske Ford.

See also
Podcast: Kaz Grala on Attempting to Qualify for the Daytona 500 With The Money Team

“Brad surprised me with how early he made the move,” Blaney said post-race. “I wasn’t expecting it. He did a good job on that. I thought we learned a lot. It got shaken up there after the green flag stop so we were kind of in our own little pack. Then the last few laps we got racing pretty hard of getting runs and knowing what was what, and what it takes to make that pass so that was good to learn. The car’s in one piece so that’s nice. Looking forward to Sunday; I think we got a pretty fast car.”

On the final lap, Kaz Grala passed JJ Yeley to make the Daytona 500.

The No. 55 will not make Sunday's field. pic.twitter.com/tJ0uPOqJJz

It will be Grala’s second start in the prestigious race and the first for The Money Team Racing. Grala overcame a speeding penalty during a green flag pit stop to best Yeley by one spot.

“I made it happen not the way I wanted to,” Grala said post-race. “I made a mistake, I sped on pit road and I thought we were out of it. But I wasn’t going to give up, no matter what. I got into a little line there with Kurt Busch pushing us. We were running fast lap times and I was hoping the timing would work out. It wasn’t by much but we did. We caught those two on the very last lap and caught the No. 55 [Yeley] for it. Pulled a couple of years off my life, but it doesn’t matter cause we’re going to be out there on Sunday. We got a shot to win the Daytona 500. We do; all 40 of us.

“It’s stressful,” Grala remarked about joining the brand new TMT Racing. “Being with a new team where a lot of things had to be done from scratch, the administration of being here, the entry blank, getting everything inside the car that I need for cooling so I stay cool in there, equipment, you name it. We’ve had to start from scratch the last 33-35 days and we somehow made it here. We built a car and we made the Daytona 500. That’s pretty cool no matter who you are. So, this is really big for us. I’m excited for everybody on the team. We’re going to celebrate tonight.”

These drivers now make up the odd-numbered starting positions for the Daytona 500. The season opener will take place on Sunday, Feb. 20, at 2:30 p.m. ET, with TV coverage provided by FOX.

The way Brad was bumping Ryan forebodes he will cause a big one on Sunday.

If so, then I hope it’s Joey on the receiving end. I think Ty Dillon will cause a big one mid pack.