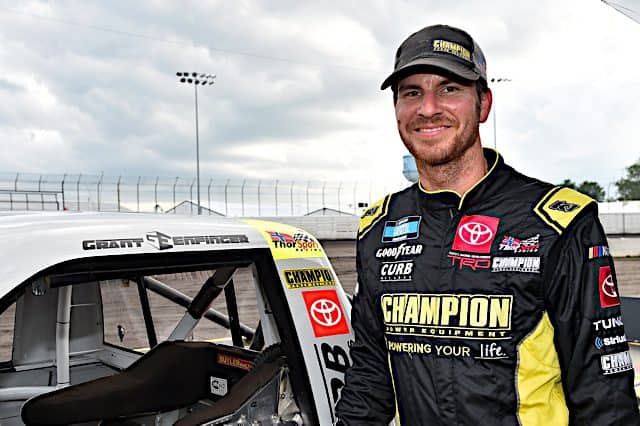 Enfinger wheeled his No. 23 Chevrolet to the fastest lap of 187.044 mph in the NASCAR Camping World Truck Series practice at Daytona International Speedway on Feb. 17.

Enfinger won the 2020 Truck season opener at Daytona, and he has one win, two top fives and three top 10s in his Truck career there.

Derek Kraus missed the top of the leaderboard by 0.014 seconds, but he still clocked in second quickest at 186.99 mph.

This practice session had a few incidents. Attempting to make his series debut, Jason Kitzmiller got his race weekend off to a poor start when he totaled his No. 97 in a single-vehicle incident.

As a result, Kitzmiller subsequently withdrew from the race, so there are 41 drivers entered for qualifying for 36 positions Friday, Feb. 18.

Then, owner/driver Bret Holmes spun his No. 32 Chevrolet, though he didn’t hit anything.

You spin me right 'round, baby, right 'round 🎶#CampingWorldTrucks | @FS1 pic.twitter.com/nTgnwyiGhq

The trucks will next hit the 2.5-mile superspeedway Feb. 18 for single-vehicle qualifying at 3 p.m. ET. The season-opening NextEra Energy 250 will will follow at 7:30 p.m. ET, with TV coverage provided by FOX Sports 1.