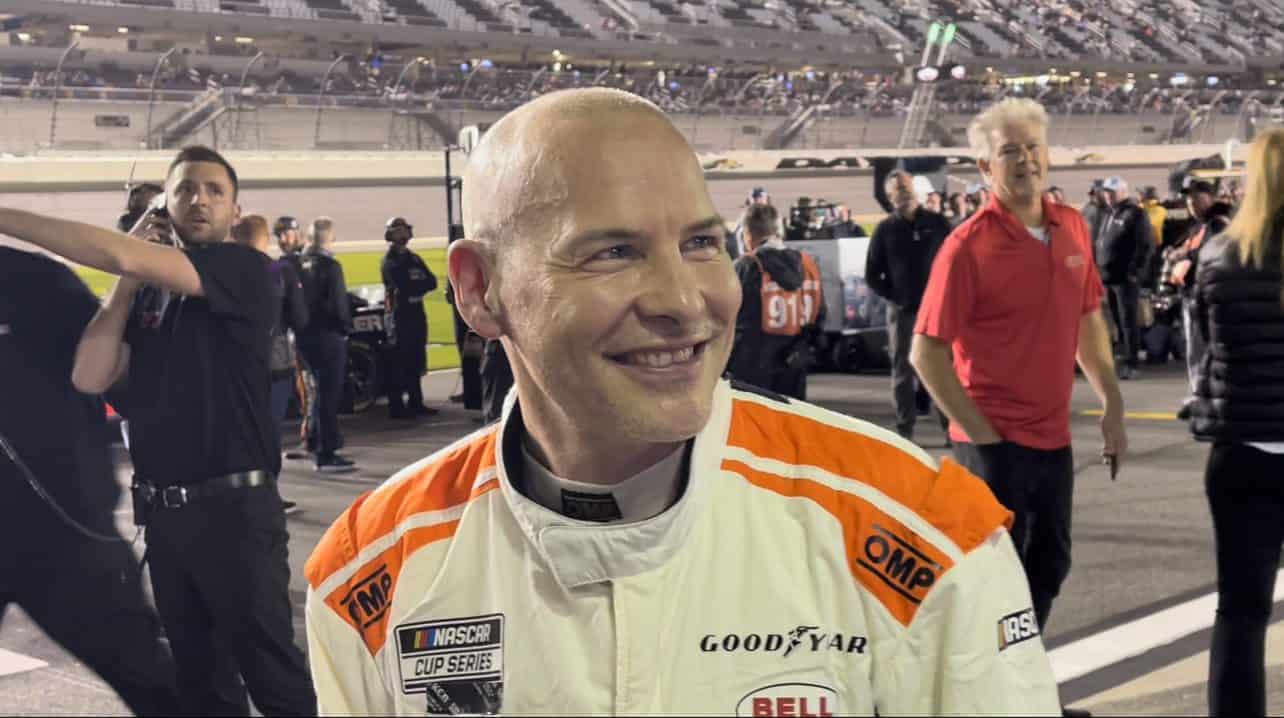 DAYTONA BEACH, Fla. — Jacques Villeneuve was adamant that failing to qualify a second time for the Daytona 500 would be “embarrassing.”

Thanks to his qualifying lap on Wednesday night (Feb. 16), Villeneuve won’t have to face that disappointment again.

Villeneuve posted the 36th-fastest lap in pole qualifying, but that 51.010-second lap was fast enough to lock his way into the 64th “Great American Race,” besting four of the other non-chartered entries to ensure his spot on Sunday’s (Feb. 20) starting grid.

Villeneuve, who won the 1995 Indianapolis 500 and 1997 Formula One world championship, was convinced after Tuesday’s practice session his No. 27 Chevrolet wouldn’t be fast enough to lock in on speed. But with six open (non-chartered) cars on the entry list, Villeneuve just needed to outrun four of his competitors heads-up.

Once Timmy Hill — the fifth of the six open cars to qualify — crossed the line with a slower lap than Villeneuve, the Canadian motorsports legend erupted with emotions. Villeneuve ran across pit road to celebrate with some of nearby crewmembers, but not everyone was there.

Villeneuve quickly hurried down pit road to find his wife and celebrate with the rest of the newly-formed Team Hezeberg.

Another look at the pure elation for Jacques Villeneuve moments after learning he qualified for the #Daytona500. #NASCAR pic.twitter.com/fwnJxFxCoc

“Sometimes, you know you’re quick and you expect [to make it] and it goes wrong,” Villeneuve said on pit road. “And that’s a big letdown. Well now I thought, ‘okay, we can’t get in on time.’ So it’s the biggest surprise and it’s such a relief. It’s amazing.”

Villeneuve was on Cloud 9 trying to process the moment for himself and the members of his team.

“We’re a tiny team from Europe,” Villeneuve said. “We didn’t work with a big team to get here. And we really think we didn’t think we had to speed to get in on time. So we were hoping to get maybe third or fourth (of the open cars) so we would have a better shot at the race tomorrow. But to be in on time is a big load off our shoulders. And it’s been 14 years since I tried. It’s been a long time coming.”

Indeed, Villeneuve last tried to make the Daytona 500 back in 2008 — his only other attempt to qualify for a NASCAR Cup Series event. That attempt for Bill Davis Racing — also in the No. 27 car — went awry in turn 3 when his Toyota got loose and crashed hard into the outside wall and other cars.

That experience 14 years ago has only made this accomplishment that much sweeter.

“It does because I started racing a long time ago,” Villeneuve said. “And then a lot of people say ‘Oh, you know, you got five kids now and 50 years old. [What’s he] doing still racing?’ But I just can’t get it out of my system.”

In Tuesday’s opening practice sessions, Villeneuve posted the 40th- and 41st-fastest laps. The team knew it had to focus on single-car runs, but the stopwatch only convinced them locking in on speed wouldn’t be an option. But on Wednesday, after some adjustments to further lower the splitter, the team found just enough speed to make it happen.

“We never expected it because (Tuesday), it didn’t go very well,” Toine Hezemans, team owner and former 24 Hours of Daytona winner, told Frontstretch. “But I think we were the only ones who actually did a lap on our own. So that was difficult to measure. But we have no experience with oval at all. But we saw already with my son, Loris (Hezemans, a two-time NASCAR Whelen Euro Series champion), in Phoenix, in the end, we were right on the pace. But here, it’s all flat out. It’s the car. So the guys did an amazing job, I have to say.”

Villeneuve was so sure he wouldn’t clock a time worthy of making the event that he wasn’t worried about thing when he hit the track for his qualifying lap.

“I wasn’t stressed because I didn’t think we would get in anyway,” Villeneuve said. “So I thought, ‘okay, let’s see if we can do a lap where I hit the line, I don’t lose half a tenth, we get maybe P4 or P3 (of the open cars).’ So if something happened in the races, I get in anyway. I really did not stress about getting out on time because I didn’t think what it was going to happen.”

A lot has changed since the last time Villeneuve drove a Cup car. Fourteen years ago, he was wheeling a Car of Tomorrow with a wing on the back of it — its first voyage in the Daytona 500. The Next Gen car, he said, is unlike anything he’s ever driven before, which says a lot for a driver who’s driven as many diverse vehicles as Villeneuve has.

“Obviously, it’s not a win. It’s not like winning the Indy 500 or the F1 championship,” Villeneuve said. “But at this point in my career, the last time I tried to qualify here was 14 years ago. Just to make the show is incredible because it’s a small team. We didn’t link up with a big team to get the car ready and it’s highly unexpected to be able to make it on time, so it ranks right after these big wins.”

Next up are the Bluegreen Vacation Duels, which start at 7 p.m. ET on FOX Sports 1 and Motor Racing Network on Thursday night (Feb. 17). His goal is to escape unscathed, then put everything on the line come Sunday afternoon.

“Sunday we’re racing,” Villeneuve said with a laugh. “We didn’t run much in the pack because our focus was trying to get in on time, and it worked out so that was the right decision to make. Now, will anybody want to race with me or to draft with me in the race? That will be a little bit more difficult, but come Sunday then there’s nothing to lose anymore. The key is to not destroy the car [Thursday].

This should, but won’t be the story of the weekend. This little team did an amazing job.
Anything else is gravy. I had this team as the last place of the open cars. Happy to be proven wrong. Now if Carl Long could just get one of his cars in, I’d be double happy, but that’s a steep hill too.