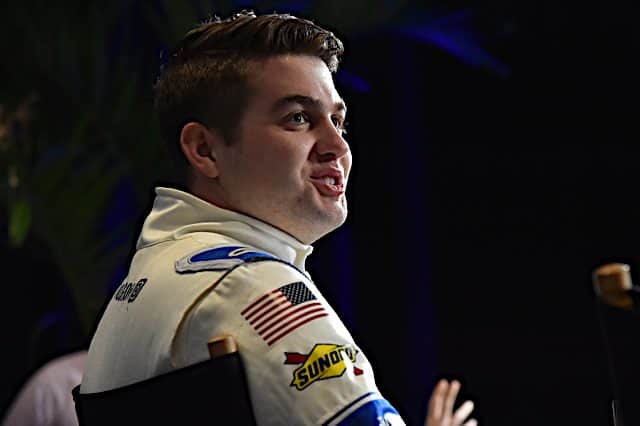 DAYTONA BEACH, Fla. — Nearly 49 years ago, Linda Beard went on a date with a racecar driver.

Their romantic evening began at a short track in Auburn, Michigan and ended in victory lane. That was how Linda Beard began dating her eventual husband Mark Beard.

Years later, Linda and Mark Beard became involved in the sport of auto racing through team ownership with a new Cup Series venture – Beard Motorsports. In 2022, however, she would have to lead the race team alone after her husband passed away in 2021.

Because they are an unchartered team, Beard Motorsports was not guaranteed a starting spot in this year’s Daytona 500 until qualifying night on Wednesday, Feb. 16.

With a qualifying lap time of 50.689 seconds, Noah Gragson and the rest of Beard Motorsports will race in the Daytona 500 on Sunday (Feb. 20) based on speed.

Team owner Linda Beard on the significance of Noah Gragson locking in @BeardOil62 to the #Daytona500.#NASCAR pic.twitter.com/WZNaOa0W1t

“Just being here is a thrill,” Beard said after her team solidified their spot into Sunday’s race. “Being a small team, having this happen to us … and having the tragedy of losing my husband makes this so much more emotional for all of us.”

Joining Gragson in the show is 1997 Formula One World Champion Jacques Villeneuve, who was the second fastest of the six go-or-go-home cars.

Despite their vastly different racing careers, both drivers have one thing in common – this is their second attempt at qualifying for the Daytona 500 after failing in their first. What’s even better for the duo, is they both won’t have to wait for a third.

Unlike Villeneuve, however, Sunday will be Gragson’s first career NASCAR Cup Series start.

“It’s really emotional to be able to make the race after last year,” said Gragson. “I’m very grateful for the Beard family. I wish Mr. Beard could be here, but we’re carrying on his legacy into the ‘Great American Race.'”

It was smiling faces for Beard Motorsports, the Las Vegas-native, and the globe-trotting Canadian race car driver.

However, as one door opens, four more stay closed – at least for tonight.

Timmy Hill, J.J. Yeley, Kaz Grala, and Greg Biffle will all have to compete in Thursday night’s twin 60-lap qualifying races. Only two of the four drivers can advance into the main event on Sunday.

“It’s going to be a challenge,” Hill told Fronstretch. “Our car is significantly slower than all the others, but we’ll have to find a way.”

Thursday night’s twin races will be the first time race fans will see the Next Gen car racing for a win on the high banks of Daytona International Speedway.

“Hopefully, we can find some more speed when we get into the pack than the others,” said Hill. “(I’m) just going to try to stay in the draft as best as possible and, hopefully, our car can hang on.”

Much of the weekend has been speckled with the storyline of part replacement issues, leaving many drivers with the issue of conserving their equipment through all on-track events until Sunday – that includes tomorrow night’s qualifying duels.

Gragson, while still having to save the equipment, at least won’t have to worry about racing for a spot in the big show.

For the four drivers yet to solidify their spot in this year’s Great American Race, the pressure is there even more so.

“There’s times when you need to go and not to go,” said Cup Series veteran Biffle. “I’m going to let those play out. We all know you can enter turn 4 in fifth and be 14th at the line. We’re going to be aggressive as we have to be.

“If we wreck this thing, we’ve got three days to fix it with no parts. It’s going to be a challenge if we have any issues with it.”