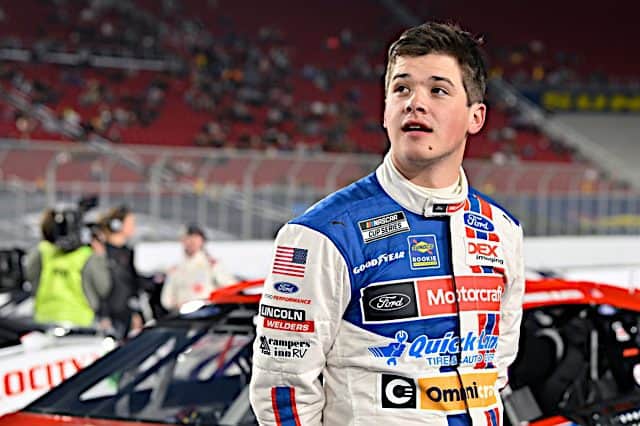 DAYTONA BEACH, Fla. – The three members of the 2022 NASCAR Cup Series rookie class have been here before.

OK, technically only Austin Cindric has been in this position before, preparing to compete in the Daytona 500.

But this time, the pressure isn’t nearly the same.

“My anxiety level was significantly lower today than it was Wednesday of last year’s Speedweeks,” Cindric said Wednesday (Feb. 16).

In 2021, Cindric made his Cup debut after racing his way into the Daytona 500. He did so while not having a charter that guaranteed him a spot in the field. That was in addition to his regular NASCAR Xfinity Series duties.

“I’m feeling like I can actually enjoy this a little bit more,” said Cindric, who enters his first season driving Team Penske’s No. 2 Ford.

Now in their early 20s, the rookies are no stranger to the spectacle that comes with NASCAR’s biggest race of the year after watching their fathers compete in it.

But Sunday is the first time that spectacle will include them.

“As an excitement level goes, it’s pegged,” Burton said. “I’m just over the moon that I’m here and able to kind of live out this dream I’ve had since I was a little kid. As far as nerves go, I’m sure there will be some. I’ve done two Cup races so far and one was (his Cup debut at) Talladega, which is an electric atmosphere.”

There was also the first Clash at the L.A. Coliseum, which was the definition of an “event.”

“It felt like a college football game and … it was cool to be a part of that,” Burton said.

However, it wasn’t the Great American Race.

One twist to the Rookie of the Year battle this season is the dynamic between Cindric and Burton.

How will being teammates shape that battle?

“I think it’s just a respect thing,” Cindric said. “Harrison and I have raced each other for a little while and we went to high school together, so we’ve known each other for a while. We’re obviously here for the same reason and it’s because we want to be successful and not just as the Rookie of the Year, but understanding and grasping what it takes to be successful at the Cup Series level.  I think from that standpoint, there’s a lot more that we can gain out of helping each other than there is doing anything different. ”

For Front Row Motorsports’ Gilliland, whose prior national NASCAR experience is limited to the Camping World Truck Series, experiencing the Clash was good preparation for what a full Cup weekend would be like.

“As a rookie, I have been on track with some of the stars of the Cup Series, but it is different when you walk in the garage and the cars are all wrapped in the sponsors you see on TV every weekend,” Gilliland said. “I think just running through every single [team meeting and practice session] was definitely a good thing.”

Like Burton, Gilliland knows from experience the gravity of a race that takes place in Daytona.

But in three Truck Series starts here, his best finish is 16th.

“Every time you go through the tunnel, it just gives you chills,” Gilliland said. “The World Center of Racing is right there huge across the frontstretch. It is definitely different coming here for the Daytona 500, being here for five days. I feel like everything just adds to the significance of it and I am really excited to see the intensity pick up throughout the week.”

With Cindric a former Xfinity Series champion and Burton a multiple-time Xfinity race winner, what are Gilliland’s expectations for his debut Cup campaign in a brand new Next Gen car?

“It is really hard to set any hard expectations,” Gilliland said. “I would say for me personally it is just to not take myself out of learning opportunities. I would like to be on the track making as many laps as possible this year. I would say I definitely have a ton to learn the first half of the season, but the second half of the season I would like to be competitive compared to Michael (McDowell). I would say the main goal is to just finish as many laps as possible this year.”

The rookies’ starting spots for the Daytona 500 were solidified in Thursday night’s qualifying races.

Cindric will roll off fifth and Gilliland starts 29th. Burton will begin his inaugural Daytona 500 from eighth. That’s after he was involved in a last-lap incident in his duel that saw him run into Joey Logano‘s spinning No. 22 Ford.

Luckily, the sturdiness of the Next Gen car means Burton won’t be in a backup for Sunday.

“I feel great,” Burton told Frontstretch. “I feel I’ve got the most practice I’ve ever had in my life compared to what we have been having. Tested the most in the offseason than I ever have in my life, got an extra race in here.