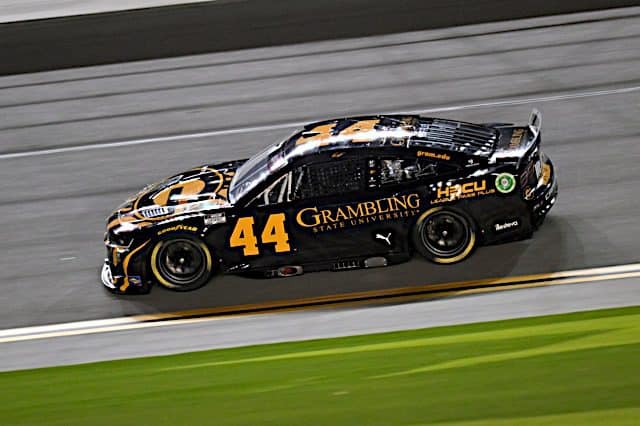 Greg Biffle, after competing in his first NASCAR Cup Series event since Homestead-Miami Speedway in 2016, raced his way into the Daytona 500 on Thursday, Feb. 17, during the second of two 60-lap qualifying races.

It’s the first Cup race for Biffle, 52, since leaving Roush Fenway Racing at the end of the 2016 season. Paired with the new No. 44 NY Racing team, it’s a deal the veteran’s worked on for several months to get back on track.

But with two laps to go, it looked as if his comeback was about to run out of gas.

“It was a nailbiter for us,” Biffle told Frontstretch after faulty fuel threatened to derail his Speedweeks. “Everything seemed to work out for us, and we were able to get in.”

Before the late-race problems, Biffle was cruising to what seemed to be a guaranteed spot in the field. After all, he had a comfortable lead over his Daytona 500 qualifying rival Timmy Hill – a whole two laps’ worth. In fact, unlike the other unchartered teams in the Duels, he and the Grambling State University Chevrolet actually seemed to be competitive.

The former NASCAR Xfinity and Truck series champion was mixing it up with the Cup regulars of today on the high banks of Daytona — like the good old days. What was even better, Biffle’s gap to Hill was only getting bigger.

Then, with a bad pit stop, that comfortable spot that NY Racing had gotten themselves into had disappeared, and for a moment, they were on their own.

“I knew that we had gone by (Hill) a couple times, so I knew he was two laps down I thought,” Biffle said. “My biggest fear all night and these last couple days was losing the draft. So, we come down to pit, and we’ve got some new guys there, and we had an issue getting fuel in it, and I knew we lost the draft.”

Eventually, the new race team was able to get involved with a train of other Chevrolets to stay in a pack, even if it wasn’t the lead draft.

With two laps to go, and a whole two laps separating Biffle from Hill, the team of NY Racing was ready to celebrate on pit road.

Until the fuel light on Biffle’s dash came on.

“We ran out of fuel with two laps to go, so the fuel light came on coming to the white (flag). I had to move up and let the 42 go and get out of the pack in turn 3 and 4 because the motor started laying down to about 22 pounds of fuel pressure.

The No. 44 Chevrolet was able to draft into turns 1 and 2 with the goal of limping back to the line for the checkered flag. In the end, however, there was no need, as race leader Joey Logano crashed on the backstretch, surrendering the lead and the race win to Chris Buescher.

It was Logano’s misfortune, but Biffle’s treasure. He had qualified for his 15th Daytona 500.

Time to celebrate! Greg Biffle and NY Racing have raced their way into the #Daytona500!#NASCAR #BluegreenDuel pic.twitter.com/aryGZ5VsaA

“I wasn’t sure if we were going to get stuck on the racetrack or make it around,” Biffle said. “Then that wreck happened on the backstretch. I think we would have made it, I guess, but I’m just not sure. I don’t know how the fuel system works in these cars yet, but it kept running all the way back to the checkered flag and then of course around on the cool-down lap, it kept running.”

NY Racing — a team that had only prepared and wrapped the car last Friday — will now compete for the first time since the 2018 Coca-Cola 600 at Charlotte Motor Speedway.

Indeed. Qualifying worries are over. Now it’s time for the big show.

Did he actually run out of gas? He kind of explained, but not really?

Biff said in the interview he did last night with @PitLaneLT right after the race his fuel light came on and he lost fuel pressure.

It sounds like a fuel pick-up problem and since the yellow came out he didn’t need full power (such as it is) to get to the finish line.

What’s the back story on Biff’s sponsor, Grambling State University. GSU and NA$CAR an unlikely pair. FOX and NA$CAR missing an opportunity to show how diverse and woke they are.