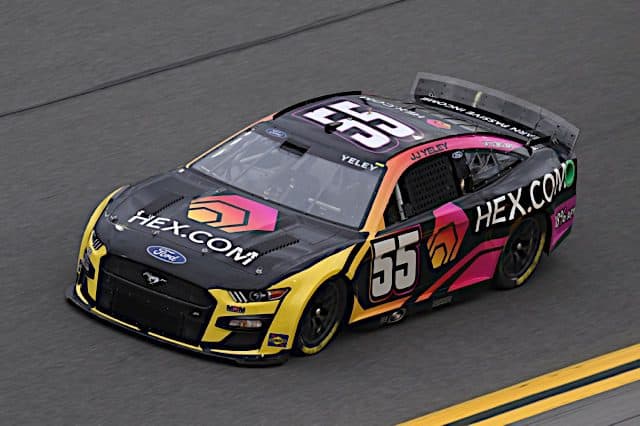 DAYTONA BEACH, Fla. — JJ Yeley was sitting pretty on the final lap of Thursday’s (Feb. 17) first Bluegreen Vacations Duel, firmly in position to qualify for the Daytona 500 for the first time since 2015.

That sunshine quickly vanished on that last circuit when Kaz Grala wheeled the No. 50 Chevrolet past him, booting Yeley and the No. 55 Ford off the starting grid for the 64th Great American Race.

Yeley’s heartbreak was obvious — coupled with frustration for how he ended up in this position on the racetrack.

“Obviously, that’s the high to low, knowing that it looks like you’re solidly in the Daytona 500 after a crazy race and the way things played out,” Yeley said. “We were about three quarters of a second faster following the [No.] 16 [of Daniel Hemric] and we were running good lap times. And at that point, I thought we were really, really safe.”

But as the leaders approached, Hemric went high to allow the frontrunners through and Yeley made sure to follow him as to not lose the draft. To Yeley’s dismay, Hemric never went back low.

“We lost more than a second and that was enough to just drag us back to that Chevy pack,” Yeley said. “Those guys got a run on us, and they were going so much faster than to just jump down in front of them and force them to do something stupid. So just a huge heartbreak and disappointment for Hex.com, again knowing that you look like you’re in good shape and then have the rug pulled out from under you.”

Yeley implied Hemric, driving the No. 16 Chevrolet for Kaulig Racing, intentionally slowed to allow the No. 50 car of Grala an opportunity to pass Yeley’s Ford to get another bowtie into the Daytona 500.

“Just watching lap times and trying to figure out what Hemric was doing, it took me almost the last two laps to come to the realization that he was just slowing down,” Yeley said. “And then, he finally let me go down the back straightaway. But at that point, we lost too much speed. The [No.] 78 [of BJ McLeod] was kind of off me and those guys were coming.

“I guess it was my fault for not being more aware. But just disappointed that the 16 did that. Obviously, if he just continued doing what he’d been doing the last 20 laps, there’s no issues for us.”

Hemric, the defending NASCAR Xfinity Series champion, had a slow pit stop after fueling issues, disconnecting him from the lead draft in the first place. He claimed he was completely unaware of the go-or-go-home situation and was simply trying to keep his car in one piece for the main event.

With 20 laps remaining, spotter Frank Denny confirmed the pack would catch Hemric if the race went green and again with 10 to go.

“When they got to us, I told him to let them know, when they get to us, we’re going to the top,” Hemric said. “And we’re gonna go top and make sure we’re nowhere near anything when stuff starts going south, if it goes south. And then in the middle of that, we’re also catching a single car in front of us, as well as the other pack of I believe Chevys coming. And the last thing we wanted to do was be in the mix of that when we came down to two or three to go, and that’s where we ended up.

“So I was trying to get out, bail out. And it just so happened that the cars that were around us were around us, and the ones that weren’t, weren’t. I had zero communication on the other side.”

That did little to console Yeley, who joins his MBM Motorsports teammate Timmy Hill as the lone entries heading home.

“I didn’t want to get away from the 16 because we were so much faster with him being a part of our group,” Yeley said. “… Obviously, [it’s] a NASCAR rule, you’re not supposed to dictate the race so he’s not going to self-incriminate himself. But there’s a timer on my dash. I know exactly what every lap time is every lap we go. I could tell we went from running 49.10s to 50.20s.”

Hemric emphasized, though, none of that was done to intentionally ensure another Chevrolet made the race.

“I literally asked coming down the pits who got in,” Hemric said. “I didn’t even think about it until I saw the [No.] 50 up on the screen there. Obviously I made sure that I got Kaulig Racing, everyone on this team in the Daytona 500 with this particular racecar and that’s what we did.”