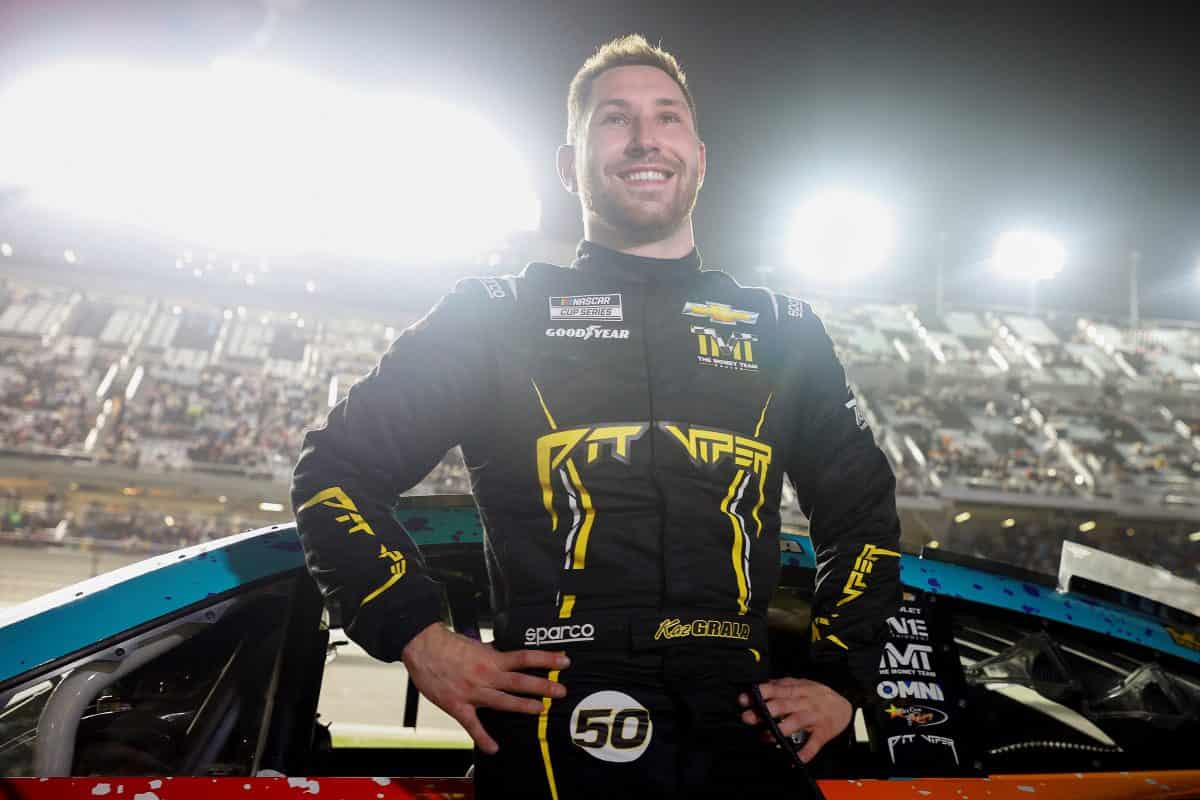 DAYTONA BEACH, Fla. – When Kaz Grala was without a full-time ride in 2021, he got a call from The Money Team Racing, a new NASCAR Cup Series race team owned by Floyd Mayweather.

With it came an offer to drive for the yet-to-be-created race team for 2022.

Grala was looking at other options, and it seemed like a too-good-to-be-true offer to drive for a team backed by a celebrity boxing champion.

However, shortly after Christmas 2021, sponsor Pit Viper joined the organization, and suddenly the idea of TMT actually racing in the Daytona 500 became very real. With that, Grala, who has had a journeyman career in the world of NASCAR, decided to take a chance on the team and their bid to enter the Daytona 500.

With no guaranteed spot in the field, forced to prepare a car in less than five weeks, the road was difficult for TMT to even show up at Daytona International Speedway. Building a team last-minute from scratch made it a bigger financial risk.

But it was a gamble that paid off, as the team was able to race their way into the Daytona 500 during the first of two Thursday night (Feb. 17) Bluegreen Vacations Duel qualifying races.

💰 @tmtracing50 was, well, money when it counted. @FloydMayweather and co. will race in the #Daytona500. pic.twitter.com/QLlKzC9C03

It wasn’t easy. Grala survived a pit road penalty and losing the lead draft to somehow recharge and surge by Yeley on the final lap of the race.

“It went from puke to puke, puking nervous to puking excited at the end,” said Grala, who will be making his second Daytona 500 start on Sunday.

Grala started the event off in great shape. By staying in the draft, running with the lead pack, The Money Team built plenty of gap to stay ahead of Daytona 500 qualifying rival JJ Yeley. At one point, it appeared all Grala had to do was follow the leader, and a start in the Daytona 500 was secured.

Then it started to go very wrong.

The No. 50 Chevrolet lost the draft and was all on his own. Yeley, who had the drafting help of fellow Ford driver BJ McLeod, was closing in on Grala – and fast.

For The Money Team, it seemed the green-flag pit stops were a saving grace, as it gave the chance to reconnect with more drafting help.

Instead, that’s when it went from bad to worse. Grala was hit with a pit road speeding penalty, and suddenly, it seemed there was no hope at all for the team.

“When we first blended off after that penalty, we were pretty much by ourselves,” Grala said. “We picked up the No. 41, but just the two of us weren’t going to be able to do anything as far as catching (Yeley).”

Then, another car joined the line. And another, and another. Grala looked down at his dash, and not only were his speeds much faster now, his gap to Yeley was closing in chunks.

On the final lap, Grala’s drafting train caught and passed the No. 55 of Yeley, turning the pain of the team’s anguish to the thrill of victory in seconds.

“I was still asking on the radio even after the checkered,” Grala said post-race. “I’m like, are we in? Are we sure? Was that definitely the last lap? Are we definitely squared ahead? And luckily, we were.”

Congrats to the kid from up here in Westboro Massachusetts! Good luck Kaz!