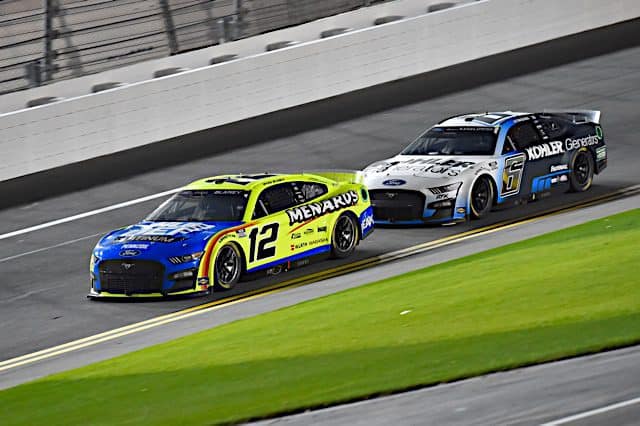 A NASCAR spokesperson told Frontstretch the wheels had been examined during a “spot check” Friday morning (Feb. 18) and NASCAR officials found something they didn’t like.

NASCAR declined to say which cars the wheels had come from.

RFK Racing driver/co-owner Brad Keselowski told Fox Sports that wheels were taken from both of the team’s cars. He said RFK Racing made “safety changes” to the wheels.

Brad Keselowski on NASCAR confiscating RFK and Penske wheels. “Not a performance-related item. … We made some safety changes to the wheels. Once NASCAR sees all the data behind it, I think we’ll be fine.” pic.twitter.com/9Awekzauai

The confiscated wheels will be taken to the NASCAR R&D Center in Concord, North Carolina, for further inspection.

Any penalties will be determined following the R&D Center inspection.

With the introduction of the Next Gen car in the Cup Series, NASCAR recently announced a new three-tierd penalty system as a deterrent to cheating. The tiers go from from L1 to L3.

Punishment for violating L3 penalties could include the deduction of Cup Series points, playoff points, crewmember suspensions and postseason bans among the penalty options.

Two of the top three Ford teams suspected of cheating already? I guess they would do whatever it takes to have a chance against the Hendrick juggernaut which, by the way, is under no suspicion of cheating whatsoever. No, they took the top four positions in the first round of qualifying fair and square. Talent and a Chevrolet engine under the hood, not having to resort to breaking the rules THAT APPLY TO EVERYONE to succeed. If found guilty, both Penske and RFK teams should be given the maximum penalties, up to and including being ineligible for the Chase. Don’t do the crime if you can’t do the time, guys. No, grow up and play by the rules. A win achieved by cheating is no win at all, and everyone will know you cheated to win.

OMG that’s rich! A fan of the cheatingest organization in NASCAR finally gets to point a finger at the cleanest…

How many times has Penske been fined or had a suspension over the last decade? I can think of 3 times.

How about Hendrick? Well over 50, wouldn’t surprise me if it’s in the triple digits… Chad Knauss has been fined and suspended more times himself than the whole Penske organization!

This could be another Mark Martin decision. “It’s not illegal but we don’t like what Roush did.” It cost Mark the championship when it was really a championship.

After seeing the wheel issues during the races this weekend, RFK racing may have the right idea.