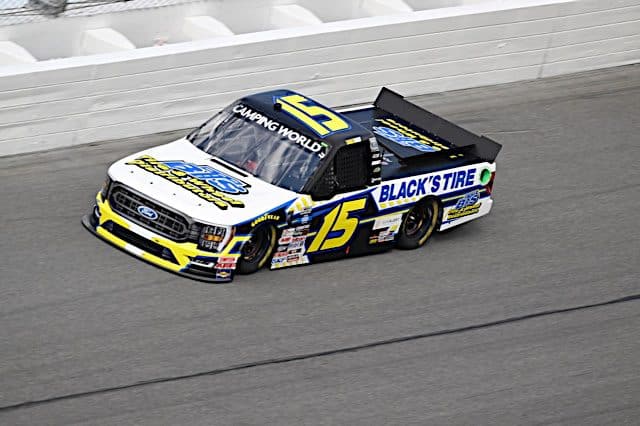 DAYTONA BEACH, Fla. — In what was an uncharacteristically calm NextEra Energy Resources 250 (Feb. 18) at Daytona International Speedway, Tanner Gray dodged a couple of late-race wrecks en route to a fourth-place result, a welcome development for the third-year driver.

“Every speedway race we’ve been to, I don’t think I’ve even finished,” he said. “It feels good to finally finish one and kind of have some luck go our way.”

Remarkably, Gray is right. In his four prior superspeedway starts, he’s failed to finish all of them. A crash and drivetrain issue hindered him at Daytona and a pair of accidents at Talladega Superspeedway prevented him from running at the finish.

Plenty of hugs for @dgr_racing and @tannergray5 following their fourth-place finish tonight at @DAYTONA, his sixth career top five finish and first superspeedway race he’s EVER finished in his @NASCAR_Trucks career. pic.twitter.com/u4BoB1SYtg

Friday night was different, though. And if that’s a sign of things to come for the No. 15 David Gilliland Racing team, Gray is all for it.

“We needed a lot of luck to change this year compared to last year,” he said. “Headed in the right direction so far, but it’s a long season. Just gotta keep on top of things, minimize the mistakes on my part and just keep marching on.”

After a rookie campaign that saw Gray score four top-five and eight top-10 finishes, 2021 was a step back. Only once did he score a top five en route to an 18th-place finish in the standings. But thanks to evasive action and avoiding the Big One in the closing laps, he kept his nose clean and equaled his top five total from last year after race No. 1 of 2022.

A wild scene just before the field took the white flag.

The red has been displayed and we'll prepare for #NASCAROvertime. pic.twitter.com/ZJ9maznIWI

“I was surprised at how calm everything was,” Gray said of the single-file racing that dominated the majority of the evening. “Everybody migrated to the bottom and kinda (rode), which is unusual for speedway races that I’ve been in anyway. But I feel like it was a good race, an uneventful one for me. I feel like we didn’t do anything spectacular. Just rode around and picked off people that were making mistakes and tried to capitalize on it.”

Gray is a believer in momentum, even this early in the season. Despite how last season went for him and DGR as a whole, they ended 2021 well and started odd 2022 with a bang. Gray has finished inside the top five in two of his last three races (Martinsville and now Daytona).

Plus, with the addition of veteran crew chief Jerry Baxter atop the pit box as his crew chief, a new veteran presence calling the shots will (and has already) done wonders for Gray’s mentality.

“I think once you get confidence, the team gets some confidence,” he said. “It kind of keeps rolling and a lot of good finishes can come from it. Last year, it was like one bad race, you’d go to the next one and it was another bad race, and it’d just snowball. So when you come here and you run good, it sets you up good for the next weekend and for the rest of the year.”

Made it through the mess and scored a P4.

Gray and DGR will look to build upon their early season momentum on Friday, March 4 at Las Vegas Motor Speedway for the Victoria’s Voice Foundation 200.