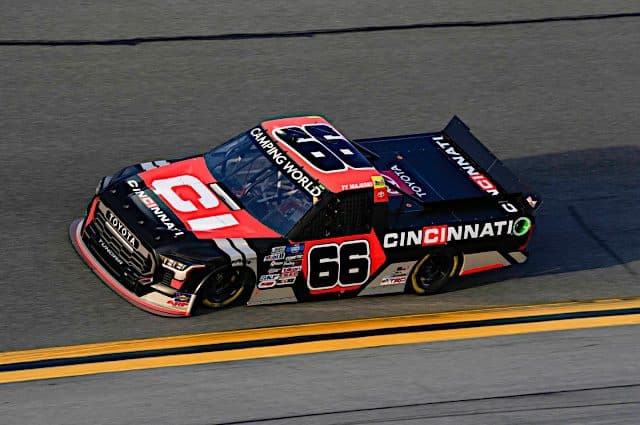 Ty Majeski began his first full-time Camping World Truck Series season with ThorSport Racing on a high note, as he recorded a speed of 179.122 mph in the second round of qualifying to capture his first career Truck pole for the season-opening Nextera Energy 250 at Daytona International Speedway

The second round of qualifying was dominated by Toyota, as Toyota drivers swept the top six starting spots.

John Hunter Nemechek, who had the fastest time in the first round of qualifying, will join Majeski on the front row for tonight’s race. Nemechek, who won a series-high five races in 2021, will look to begin his 2022 championship campaign with his first win at Daytona.

Behind Nemechek was Kyle Busch Motorsports teammate Chandler Smith, who will start third. Smith won his first career Truck race at Bristol Motor Speedway last summer, and he followed it up with his secondwin in the season finale at Phoenix Raceway.

Corey Heim, who won the pole for tomorrow’s ARCA race, rounded out the KBM trucks and qualified sixth, while Grant Enfinger qualified seventh in his return to GMS Racing.

Rounding out the top 10 was Riley Herbst, Jesse Little and Lawless Alan.