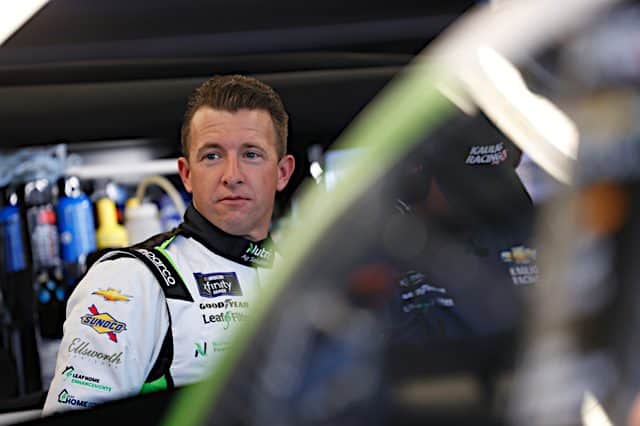 Saturday night in the Beef. It’s What’s For Dinner. 300 (Feb. 19), he fell short yet again of that elusive checkered flag.

As the caution came out due to Myatt Snider‘s horrific backstretch crash on the final lap, Allmendinger was scored second behind Richard Childress Racing’s Austin Hill, his second straight runner-up and third consecutive top-five result at Daytona.

“We got single file and I saw Austin (Hill) kind of move up to the top there,” he said. “I’m still learning and trying to be better at not getting too far out in the lead there, but he just timed it perfectly. He backed up, and for the last 20 laps or so I’d been pacing myself off the top and saying ‘okay, how big of a run can he get?’ He just timed to where that thing got a big push.”

Allmendinger led three times for a total of 18 laps on the night, including 13 of the last 15. As Snider was sent airborne into the catch fence, it came down to mere inches that Hill bested Allmendinger by at the time the caution was officially displayed.

In his rookie season for @RCRracing, the No. 21 machine ends up in victory lane on a last lap pass on @AJDinger

“I actually thought I was gonna be okay,” he said. “I made (Hill) go to the bottom so I didn’t get the car to the outside of me. I thought ‘alright, if he goes to the bottom I’m going to have the momentum and side draft him and still win this thing. Unfortunately, as soon as he started to pass me I looked at my mirror and saw the big wreck behind me. So hopefully everybody’s okay.

“Just proud to have Nutrien Ag Solutions back with Kaulig Racing, to have them believe in me and be on my racecar, I so bad want to give them a win. But damn, we were about 20 feet away.”

Despite Daniel Hemric‘s 24th-place result, the defending series champion won the opening two stages from the pole and Landon Cassill came home sixth in his first race with the organization. The speed and cohesiveness the trio showed once again on a superspeedway was yet another example of why Kaulig has been ultra-successful at these races, winning six of the last 10 overall at Daytona and Talladega Superspeedway.

“You got teammates that buy into the system and Kaulig and believe in each other, trust each other, to take the runs and help try to block and whatever we got to do to try to keep all three Kaulig Chevys in line,” he said. “I thought it was great, and I thought I was gonna finish it out the right way.”

But if you think back-to-back runner-ups and three top fives in a row would help him warm up to the concept of superspeedway racing, think again.

“I still frickin’ hate ’em. Like, with a passion,” Allmendinger, who finished inside the top 10 in 15 of his 51 Cup superspeedway starts, said. “I’m always gonna hate superspeedway racing. Even if we win the race, I’m still never gonna enjoy them. But at the end of the day, they still give a trophy at the end of this race. What I hate more is losing, so I’m gonna take every chance I can get to go win these races. I thought I did the right thing again. Just missed it.”

As his driver was debriefing on pit road, owner Matt Kaulig came over and shared some words with his driver.

“He said I’m fired for superspeedway racing,” Allmendinger said of the conversation with a smirk. “Gone!” Kaulig shouted at him.

AJ joked that he was "fired from superspeedway racing" because he "can't win any of these things."

💭 "GONE!" Kaulig shouted at him. pic.twitter.com/qE3jqJlN3p

The No. 16 team will look to do one spot better next weekend at Auto Club Speedway in the Production Alliance 300 (Feb. 26 at 5 p.m. ET), where Allmendinger has one career Xfinity Series start: his first one, back in 2007.

AJ got hosed. They should have thrown the flag immediately, but they waited until AJ got passed.